My Last, Desperate Act of Satire

The day after my students were so articulately pissed off to learn that the namesake of their college probably never existed, and that the Church knew it, I wondered what to do next.

After five years pushing against the college’s practice of giving lip service to the open exchange of ideas while ensuring that no such exchange ever took place, I was exhausted. It started when I wrote a satirical novel about the “College of St. Bernadette,” a remarkably similar place. That eased the pressure in my head a bit. The following year, a public confrontation with the college president over free expression resulted in the first student protest in the school’s history.

Another three years passed with no improvement on campus, so I finally turned in my intent to resign at the end of the year. I genuinely loved my colleagues and students, but the dissonance had become too hard to take.

Now, with just weeks to go, I had watched my students discover that the very people who had held Catherine of Alexandria up to them as a “woman of substance” knew full well that her existence was “seriously doubtful.” knowledge they never shared. I had no remaining illusions about changing the place, but it seemed a shame to keep that powerful moment confined to one classroom. But I had no idea how to let it out.

That changed when a bit of serendipity plopped into my inbox.

Professor Floyd Gardner was once again heading up the committee to award the top honor to a graduating senior: the Helen Landers Memorial Award. Floyd was seeking faculty nominations of deserving seniors. And suddenly I knew how to say goodbye to the college: with one last desperate act of satire.

It was obvious to me who deserved the Landers Award. No one could hold a candle to Katie Alexander.

I sat down and wrote an impassioned nomination of Katie, whose accomplishments truly left her fellow students in the dust. At the end of the letter, I mentioned a feature she shared with St. Catherine of Alexandria: she didn’t exist.

When the list of nominated students was posted, Katie’s name wasn’t on it — and the Lord had delivered them into mine hands. I turned to the one remaining outlet for my dissent, a satirical advice column I’d been writing for an unofficial faculty newsletter. 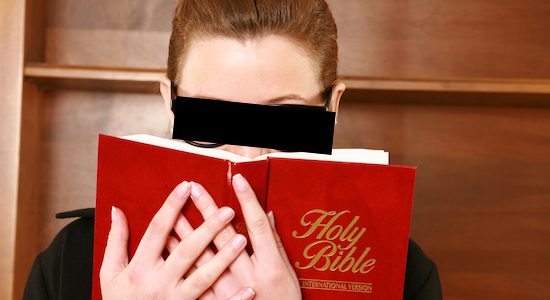 Called Ask the Bible Gal, the column consisted of little satirical jabs at scripture and doctrine:

Dear Bible Gal:
I have a colleague who teaches a class on Sunday, thereby working on the Sabbath.  Exodus 35:2 clearly states that she must be put to death — but am I morally obligated to do it myself? Mystified in Minneapolis

Dear Mystified:
Excellent question!  If the college administration doesn’t take care of it, then yes, I guess it’s up to you to lend a hand. Just don’t do it on the Sabbath, or you’d be working too!   BG

I’m writing on behalf of “Mystified in Minneapolis,” a colleague of mine who wrote to you about dealing with a Sabbath-breaker. She took your advice, and – well, let’s just say there’s one less Sabbath-breaker this Sunday!

“Mystified” would have written to you herself, but at the post-retribution party (you’ll get a kick out of this), someone pointed out that she had in turn violated the Sixth Commandment against killing! Oh, you should have seen her face, she turned as red as a tomato! We all had a good laugh, then killed her, of course (Leviticus 24:17, “If anyone takes the life of a human being, he must be put to death”) – and boy then did we have a problem, since we had to kill the killers…

We want to do this by the Book, so here’s the question: what should the last person do? – Stumped in St. Paul

There’s a scriptural solution to every problem. In this case, ask yourself: what would Saul do? (1 Sam 31:4). Problem solved! Let me know how it…oops. Never mind!   BG

(Saul falls on his own sword.)

Nothing earthshaking, but it got me through the year. Now I had just three installments remaining — and when Katie Alexander’s name failed to appear on the list of nominees, I knew what to do.

GENTLE READERS!! A CALL TO ACTION

Please join me in outrage against an injustice at St. Catherine’s! A student by the name of Katie Alexander has been denied the right of consideration for the Helen Landers Memorial Award – denied because of something not even mentioned by the committee as grounds for exclusion!

Everything about Katie amazes. In addition to stellar academics, she has exhibited extraordinary leadership skills and a heart of gold. In 2002, she founded Hey Hunger – Bite Me!, a foundation that to-date has served over 150,000 hot meals to the homeless. In early 2003, Katie launched a student antiwar movement called Hey War – Fight Me!, successfully ending the Iraq War in May 2003, just in time for President Bush’s carrier landing.

Katie shares an astonishing number of characteristics with the namesake of the College: she is intelligent, ethical, courageous, virginal, and fictional. It would be strange indeed if the qualities that inspired the naming of the college after St. Catherine of Alexandria would not also merit recognition of Katie F. Alexander for this award.

Strike a blow for those among us who happen to be allegorical, a blow against blatant actualism! Let committee chair Floyd Gardner and the rest of these fictophobes know what you think. JUSTICE FOR KATIE! – BG

The following week, a tragic announcement:

There will be no Bible Gal column this week, my friends. As you may have guessed from the somber darkness of my font, I bring you terrible news. Our beloved Katie Alexander has been struck down in the prime of her non-existence, martyred by a seething mob of actualists who could not share the world with one so beautiful. The rabble fell upon her as she sat in prayer to her greatest imaginary friend, Saint Catherine of Alexandria. They dragged Katie off and bound her to a wheel, which, though admittedly making her dizzy, did not break her.

So they smooshed her.

Whenever a human soul is torn prematurely from this realm of suffering and tears and condemned to an eternity in Paradise, my heart weeps. If only Katie’s cruel fate had been delayed for even an hour! Alas…it was not to be.

Will there ever be another as brave, as accomplished, as virginal and selfless and thrifty as our Katie? You know the answer. Yet still she lives – in our hearts, in our memories, and on our DWKD bracelets (Do What Katydid, $16.95 plus shipping at www.dwkd.com. All proceeds go to the beatification campaign). – BG

Then, in the last week of my career, one final squeak:

As you can tell by the cheerful background behind my font, I bring you great good news!! In my previous column I cried out from the depths, mourning the martyrdom of our precious Katie Alexander. But the LORD has banished grief, as he is wont to do, sending down a torrent of signs and wonders such as our suffering world has not seen since the 1980 Miracle on Ice!

My inbox is filled with figuratively thousands of testimonials, all telling of miracles that have come to pass after praying to the departed Katie. Mrs. Frieda Groot of Bemidji, Minnesota found the rosary she lost seven months ago, tucked beneath the passenger seat of her Buick Riviera. The Lundgren twins of Kingdom City, Missouri simultaneously got over the nasty sore throats they’d been trying to shake for four days. Just ten minutes after beseeching Katie for financial help, one Gertie Holtz of Pine Bluff, Arkansas opened her mailbox to find that she may very well have already won ten million dollars!

And the topper: the very day after Katie’s ascension, the air temperature in Saint Paul hit seventy-two degrees, five degrees higher than the prediction – five, the number of letters in Katie’s name! Take that, ye skeptics!

But – according to the critically rigorous Vatican procedures for sainthood, these many miracles can only be considered preludes to, not reasons for, Katie’s canonization. Though the required period between a person’s death and sainthood was reduced by Pope John Paul II from 50 years to 72 hours, all of the above miracles occurred — alas! — within two days of Katie’s smooshing.

At last, the clock ticked away those interminable three days – and bingo, a French nun was miraculously cured of restless legs syndrome after praying to Katie for something very similar! Doctors around the world are baffled, noting that diseases never go into remission on their own. Pope Benedict XVI immediately beatified our precious Katie, waiting until later that afternoon to canonize her as Saint Catherine, Jr.

This is the Bible Gal, signing off! – BG

DALE McGOWAN is the author of Atheism for Dummies. He lives in Atlanta.

March 27, 2016 Science Provides The Keys To Success In A Secular Life
Browse Our Archives
Related posts from The Secular Spectrum