The Broken Sexual Ethic of Faith and My First Time

The Broken Sexual Ethic of Faith and My First Time February 10, 2017 Pat Green

I enjoy sex. I enjoy it a lot. I have a very healthy view and expression of it in my 40’s. I used to feel a lot of guilt over it, but so much of that was a conditioned response to the broken sexual ethic of Christians. Being raised in a Catholic family with some Baptists, a young charismatic who would become an evangelical youth pastor and then a progressive minister, I have seen a taste of it all.

In this natural course of things a sexually healthy adult will hopefully arise. Someone who believes in consent, does not use sex as a manipulative or abusive thing and has natural and healthy activity in this area. The expression can range from a committed monogamous relationship to respectful, but casual sex.

More than one woman who commented on my last article mentioned that they had experienced pain as a young woman over the purity culture in their youth groups. Unreported rape or molestation from guilt or shame, fear that since they were not virgins they were broken, and other things. We often start hurting children in church culture at a very vulnerable time. Adolescence and puberty is a confusing time. If adult leaders and parents handle it well, it can also be a time of discovery and wonder. If it is not handled well, it can be a time of great pain that could lead to a lifetime of pain and confusion.

When I was 20, I was a sophomore in Bible College. I was a youth leader in the church I spent my teen years in. I had already been told by a youth pastor that even masturbation was a sin. This would leave me with great guilt, self loathing and fear of losing my salvation every time I did this very normal thing. Then I met her. I met this lovely young woman at a mini golf course. I would bump into her again at a party. I would get her number. We would start dating. Then came the night that I lost my virginity.

She knew I was a virgin the night we decided, a few months into the relationship, that we were going to have sex. She lit scented candles, dressed beautifully, and made the awkward as lovely as it could be. After we were done we went to Denny’s and delighted in each other and our friends. Then came the guilt throughout the short remainder of our relationship.

I could not be with her and not think about god. I could not be in church and not think about her. I felt trapped and it began to show. One night we were on the phone and she said with a shaky and sad voice, “I feel like I took something that does not belong to me.” Then, a few days later, she broke up with me in a Dairy Queen parking lot. I not only put myself through guilt and shame for a very normal thing for young adults to do, I also put her through guilt and shame. We never spoke again and I never got to tell her how wrong I was and how small my world view was.

I would later go back to my christian ethos and marry someone who shared the sexual values of waiting till marriage and go on to be a youth pastor where I would tell young people not to have sex before marriage, virginity was a gift and if you lost it you could never give it to your spouse, girls should watch how they dress, etc etc etc.

As the years progressed I would see the hypocrisy of adults. If in a church singles group a man would get too grabby with a woman, she would be asked what she wore or did to provoke it.  Christian married couples who had normal and healthy sex before they were married would tell their single friends in a relationship that they should not have sex. And there was always the undercurrent of “don’t be gay”, slut shaming, and rape culture.

Some churches tell you not to use birth control because this is for procreation. Some will tell you that if you are divorced, being with anyone else for the rest of your life is infidelity with your former spouse. The list goes on and on and on.

When I broke away from that and entered the progressive church movement, I was surrounded by ministers and lay people who were leaving that same restrictive environment. Many knew that what we were taught, and in some cases taught from our own pulpits, was wrong. We did not know what healthy was, so there was a lot of acting out. Like a person denied candy or soda their entire lives, the pendulum swung from one extreme to the other and many of the gatherings were chock full of equally unhealthy behaviors. This ended a few marriages and somehow managed to still make women feel less and shamed for things done at parties at conventions.

For this former evangelical, it took a good therapist, a lot of mistakes, and release of a whole lot of guilt before I could enjoy a normal and healthy sexual expression.

If you have always lived a secular life, please understand that many of those who are walking away from the subculture of faith have this baggage. Imagine feeling guilty because you masturbated. Imagine shame over losing your virginity. Having to keep a normal adult sexual relationship hidden from people in your social circle for fear of shame. The pain of having to keep your gender identity or sexual orientation in the closet for fear of being shunned and going to hell for all eternity is something I cannot imagine. Neither can I imagine the shame of being treated less as a women and being held to a different (and lessor standard) than men.

If you are someone who is walking away from the sub culture of faith, I can only say this to you. I understand the pain and frustration. I also understand the desire to lash out and act out. There is a science called psychology. It is a wonderful science. If you find a good therapist and rewire your thoughts on sex, sexuality and expression you will find a healthy balance without guilt, without shame, and full of delight and wonder.

February 7, 2017
I'm Sorry For My Part In Creating The Monster And I Hope You Forgive Me
Next Post 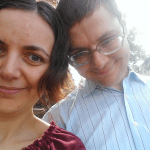 February 13, 2017 Preserving Our Democracy on Valentine's Day
Browse Our Archives
get the latest updates from
The Secular Spectrum
and the Patheos
Nonreligious
Channel
POPULAR AT PATHEOS Nonreligious
1