Embracing a Hindu Life: One Journey to Becoming Hindu (Part 1)

I learned in conversation with Hindu American Foundation colleague, Fred Stella, how he came to embrace a Hindu way of life. His journey started in his teenage years, and has led him to be Pracharak (“outreach spokesperson”) for the Western Michigan Hindu temple – and an articulate Hindu whose interfaith advocacy I have valued for years. His story is so compelling that I thought it appropriate to share here. (Note: This appeared earlier MyInd)

One thing I really don’t like being is cliché. I try to stay away from easy characterization as much as I can. But I confess there is one thing about me that at first blush is about as cliché as they come for an American who came into his own in the late 1960s and early ‘70s. Yes, I was seduced by what one author referred to as “The Subtle Serpent.” By this she was referring to Hindu thought and practices that enticed many members of my generation to explore the mysteries of the East. And those of us who did indulge have been the on the receiving end of many a smirk, snide remark or rolled eyes on plenty of occasions.

In some ways I was a textbook case. Raised in a middle class Christian (Roman Catholic) home and schooled in the institutions of my faith from kindergarten until I received my college degree, I yearned for something more than I was being given. From childhood up until the beginning of my teens I really, really enjoyed my religion. I was enthusiastic about attending church, I loved religious studies classes and I appreciated being a part of the greater Catholic culture. As most Indians intertwine faith and culture in Hinduism, the same can be said for Italians and Christianity. The secular traditions revolving around Christmas and Easter were as sacred to me as Holy Communion.

But ours was a questioning generation. I wish I could count the number of people who now claim to be ex-Christians because of the treatment they got when they provided challenging queries to Sunday School teachers or pastors. And often it was the same issues that seemed to frustrate so many of us.

“You mean my best friend, who is Jewish, is going to Hell?”

“What about people on some remote island who have never heard of the Bible. Are they going to Hell?”

While I was never impertinent enough to cause a teacher to go grey before their time, I had these same questions and more; and I intuited that asking school or church authority would leave me unsatisfied. So I didn’t bother. Around the age of 13 I just decided that I believed what I believed and would not care if I colored outside the lines of the rigid system that had so much sway over so many. All I cared about was that I believed in a loving universal presence that I had no problem calling “God,” and that Jesus was a great teacher whom I could no longer call God. As long as I didn’t open my mouth I was fine. I didn’t and I was.

So you want to know what cliché really looks like? In 1968 the Beatles went to India to meditate with Maharishi Mahesh Yogi. All my life I’ve been a huge fan of the Fab 4. To say that this part of their career piqued my interest is an exercise in extreme understatement. I was thrilled to hear about every aspect of their pilgrimage. When meditation was described it occurred to me that I used to do something like that when I was a kid. Completely unguided, I would sit in a chair and try to peel the layers of my mind back in an attempt to actually see if I could find the thinker of my thoughts. I was probably four or five years old when I started this. It didn’t last long, but the memories of those experiences have stayed with me. So now that my heroes, the Lads from Liverpool were sitting cross-legged in an ashram I knew that someday I would take instruction and unlock the universe in my mind. It was interesting that as much as I was enthused about The Beatles and the path they had chosen, I was not attracted to the Maharishi as a teacher. I felt no desire to learn TM. I cannot say why. I just thought that someday I would find a channel that worked for me.

Let’s fast forward a couple of years and we’ll find me sitting in my Catholic high school’s Comparative Religions class. I must stop here and say that I was blessed to have attended a very progressive school. The Church at that time was going through a period of liberalization and it was filtering down into its schools. A number of the priests and nuns who taught me were questioning the same dogmas I that was. There was also a newfound sense of toleration of other religions. Rome was no longer so quick to say that those who had different beliefs were solidly on a one-way ticket to damnation. So the teacher of our Comparative Religions class did not instruct us with the smug understanding of showing us how the ‘heathen” lived. She seemed to be very excited to tell us the positive aspects of the traditions we studied.

Then we got to Hinduism.

I have no recollection of what I learned in that class about Hindu Dharma. Really. I can’t think of a thing. But I do remember feeling a very strong pull. I needed to learn more. At this point, in 1970 Detroit there was no organized expression of Sanatana Dharma other than the local ISKCON temple that had opened up just a year or so earlier. The devotees were a constant presence in front of a major department store downtown every Saturday as they held sankirtan and invited the uninitiated to join them for chanting, Gita study and Prasad every Sunday evening. The very first time I saw a Krishna devotee chanting and dancing on Woodward Avenue, I had no idea who or what he was. I started laughing uncontrollably. But the class had given me a little perspective. The next time I approached one of them and they gave me a card with information about their Sunday agenda.  Since I couldn’t drive I had to enlist a friend who did.

The experience was, in a phrase, life changing. Now, I will admit that much of what I experienced that afternoon that stuck with me was the exotica of it all. The men in dhotis, women in saris, the sweet incense (as opposed to the Catholic pungent frankincense), colorful murthis, and youthful energy unlocked a part of me that seemed ripe for expression. The Gita lecture that I heard made sense to my untrained 15 year old ears. No, I can’t tell you what the subject of the day was but I knew that I wanted to hear more and read this book with the title I couldn’t pronounce.

Then there was Prasad.

I’ve often said that if Hinduism ever advertised on TV or radio, its slogan should be, “Hinduism…Come for Enlightenment…but stay for dinner!” At this time not only were there no mandirs in Detroit outside of ISKCON, there were no Indian restaurants either. So not only was this my first experience with Hindu Dharma, this was my first plate of curried vegetables and chapattis. Yes, a new chapter had opened up in the life of this rather gawky seeker. I now had two great ambitions: To achieve Self-Realization AND find the right face wash to get rid of these darn pimples.

NEXT: Finding My Way Home 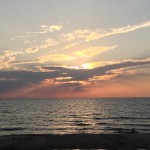 February 15, 2017
Purushartha: Pursuing the Four Goals of a Human Life
Next Post