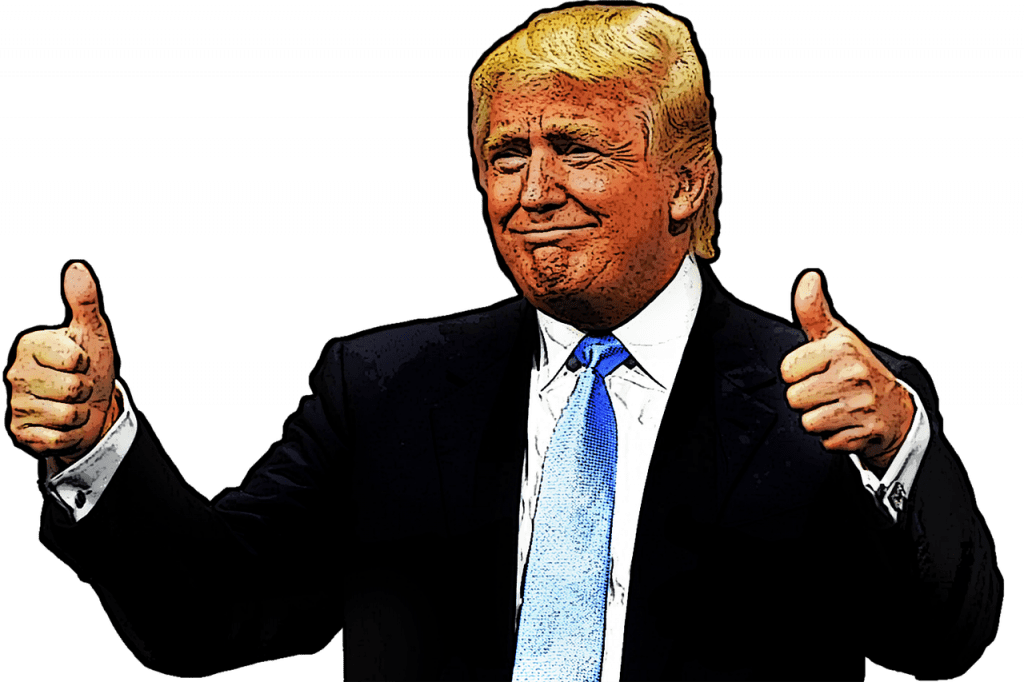 This week, I have had two different conservative Christian social media friends share memes that nearly floored me with their levels of what I can only deem willful ignorance. The memes were about different things, but their unmistakable messages were inextricably linked. Donald Trump, despite the enormous mountain of evidence to the contrary, appears to have that segment of Christianity farthest to the right on the political spectrum completely hoodwinked and believing that he is a representative of Christ’s message. I am beginning to believe, sadly, that the situation has passed the point of no return. Nationalism has eclipsed the message of Christ in the pyramid of values that far right Christians hold most dear.

This was the first meme in question… 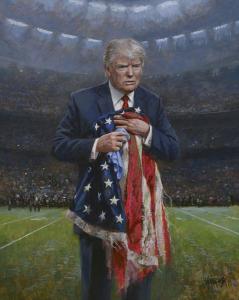 It is a “work of art” depicting a noticeably distraught and concerned President Trump walking off an NFL football field clutching a desecrated flag. Accompanying this image was the following text.

“[Artist’s name] painted this picture of President Trump and named it “Respect The Flag.” The painter says, “I painted President Trump picking up a shredded and trampled flag off the football field. He holds a wet cloth in his right hand, as he attempts to clean it. I respect America. I respect the flag, the anthem, and the President; because he doesn’t back down to those who do not.”

I don’t even know where to begin with everything that is wrong with the sentiment of this image and caption. But here goes nothing…

This was the second meme… 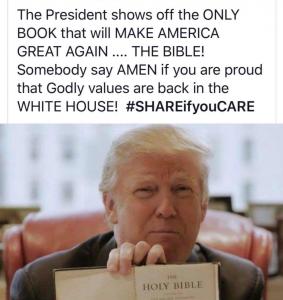 Where do I begin with this one?

First of all, I’m not certain that picture hasn’t been photoshopped, but let’s assume for the sake of argument that it is a legitimate image of President Trump holding up the Holy Bible.

There is so much to consider here, let’s dive in…

“I was not raised in a particularly religious household. I had a father who was born a Muslim but became an atheist, grandparents who were non-practicing Methodists and Baptists, and mother who was skeptical of organized religion, even as she was the kindest, most spiritual person I’ve ever known. She was the one who taught me as a child to love, and to understand, and to do unto others as I would want done. I didn’t become a Christian until many years later, when I moved to the South Side of Chicago after college. It happened not because of indoctrination or a sudden revelation, but because I spent month after month working with church folks who simply wanted to help neighbors who were down on their luck–no matter what they looked like, or where they came from, or who they prayed to. It was on those streets, in those neighborhoods, that I first heard God’s spirit beckon me. It was there that I felt calls to a higher purpose–His purpose.”

Can you, in a million years, imagine those words coming out of the mouth of Donald Trump? Now I ask you, when comparing the words and deeds of Trump with Obama, which man better reflects the message and demeanor of Christ?

If I had the artistic ability to do so, I would create my own painting in response to these two memes. Since I can’t draw or paint well, let me try to paint it with words.

Imagine, if you will, a painting with a tone very similar to the one of Trump with the flag that I shared above.

Now, replace Trump with President Obama and replace the desecrated flag with a dirty, tattered and torn Bible.

Are you getting the picture?

If someone with artistic ability would like to create such an image, I’d love to see it.

But, just a word of warning…if you share it on social media, you may make the heads of your right wing Christian friends explode.