Going Back to Where We Came From 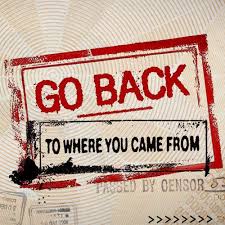 Trump has the whole country in a tizzy again. When the master distractor resurrected the well-worn racist mantra “go back where you came from” in reference to four women of color in Congress because they have been outspoken and critical of his administration, the nation seemed instantly to become even more divided. Trump’s supporters loved it because they’ve never heard a president so plainly speak the way they speak and think the way they think. The Christian Right loved it because two of the women in “The Squad” are Muslim. By the way, if you don’t think what Trump said was racist, try to imagine him saying the same thing to a white, Christian, male. Can’t do it, can you?

Here is more of what Trump had to say to The Squad:

“Why don’t they go back and help fix the totally broken and crime infested places from which they came? Then come back and show us how it is done.”

Uh, Donald, I’m afraid the joke may be on you, three of the four women to whom you were referring were born right here in the U.S.

All this nonsense has gotten me to thinking a lot about that phrase, though; go back to where you came from.

Actually, I’ve got to hand it to Trump, he does make me think a lot–a lot more than I really want to.

When Trump invoked that phrase, I realized that it shows complete ignorance in more ways than one and reveals the hollow nature of blind nationalism. After all, taken literally, we all came from the same place. This is true whether or not you adhere to any particular religion. It is true if you follow only science. It is true if you follow only the Bible. We all share a common origin and none of us are from here in the U.S.

If you are, like close to half the world’s population, part of one of the “Big 3” religions, then you must understand that your origin story is even more specifically homogenized. Even though many right wing Christians seem either to be ignorant of it or choose to ignore it, they are literally half brothers with Muslims. Christianity, Judaism, and Islam are known as the Abrahamic because they all stem from the family of Abraham. Specifically, Jews and Christians stem from Isaac, Abraham’s son from his wife, Sarah, and Muslims stem from Ishmael, Abraham’s son with his concubine, Hagar. Christians and Jews are brothers from another mother with Muslims. Not only do all three religions worship the same God, they sprang from the same loins.

So, scientifically speaking, if we all went back where we came from, we’d probably all end up in Africa someplace. How ironic!

Biblically speaking, if all us members of the Big 3 were to go back where we came from, we’d be headed for Jerusalem. That, historically, hasn’t gone real smoothly.

I’m not really sure where I’m going with this other than to point out how utterly ignorant, short-sighted, bigoted, and vapid the whole “go back to where you came from” nonsense really is.

Take a listen to this song I wrote to accompany this essay by clicking below.

August 5, 2019 Yes, We Have a Mental Health Crisis in America. It Starts in the White House.
Recent Comments
0 | Leave a Comment
"good article overturning roe v wade will not stop people from getting abortions it will ..."
Brandon Roberts Abortion Ban Questions Christians Should Ask ..."
"Churches are shrinking like the polar ice caps, they have delusions of relevance."
Nixon is Lord Jesus and Elon Musk: America’s Income ..."
"I'm suspicious that that sounds more like political ideology than valid economic analysis. Can you ..."
David N. Gray Jesus and Elon Musk: America’s Income ..."
"And that's why you'll always remain in the spiritual kindergarten..."
Steven Waling Empty Tombs and Empty Shells
Browse Our Archives
Related posts from Empathy Mining