Good Works or Faith? What’s in a Legacy? 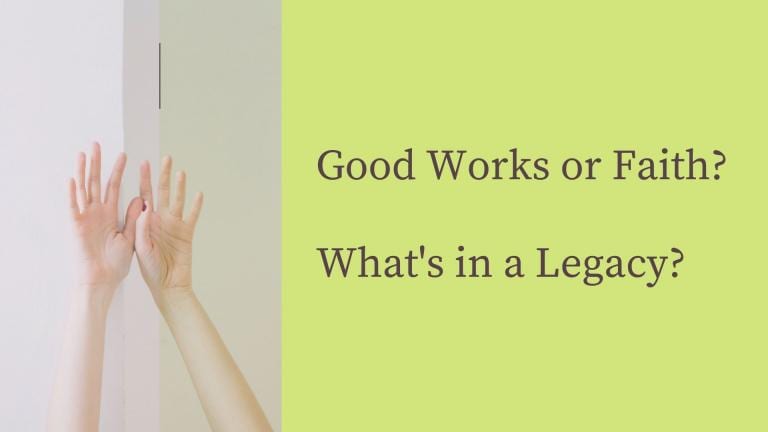 The topic of faith vs. good works goes back a long way in Christendom. Ultimately, that question is the reason we have two branches of the Christian faith, Catholicism and Protestantism. Sometimes I feel like the Protestant slant that we are saved by faith alone gets a bit abused. I sense that sometimes, people use that as an excuse not to do good works. That’s not how it’s supposed to be. After all, it was the original Protestant, Martin Luther, who said, “God doesn’t need your good works, but your neighbor does.”

“God doesn’t need your good works, but your neighbor does.”

In these politically divided times, I’ve been reflecting a lot upon how others perceive me. I’ve asked myself the question, do I want to be remembered for my faith or how my faith manifested itself in my actions? The clear choice is the latter. Ultimately, faith is a fickle thing; it isn’t constant, it wavers, growing and receding like a glacier. If Protestants are right, faith will get you into heaven, but what about the legacy you leave behind? Is that not important? It is to me…perhaps that’s my weak faith talking. I’ve been doing considerable thinking about what I want my legacy to be. Like everyone else, I’d like to be remembered when I’m gone, and I’d like to be remembered fondly. That gives my words and actions–my works–great weight, despite what Protestants believe about the keys to the afterlife.

I firmly believe that if more Christians concerned themselves with their legacy on earth, this world would be a much better place for the ones they’ll leave behind. If one shields themself behind the idea that their faith is all that matters in the end, they open the door for their works on earth to have dire consequences for the non-believers they encounter. This “I’ve got mine” attitude reveals itself in the works of too many Christians and their legacies are helping to drive people away from the very faith they value so much.

So, I am trying to be extra conscious of my good works. They are what I want to leave behind. They will be my legacy.

I wrote this song about this topic. I hope you’ll enjoy it, and I pray it will help you reflect upon your own legacy.

October 28, 2019 Sometimes it Can Take Decades Before God's Plan Makes Sense
Recent Comments
0 | Leave a Comment
"Bet you're sorry you posted this about 45, when it should be for 46 aren't ..."
Nadine Dennison One Nation, In Distress
"Your song Blood in the Water can be a ministry to those who have lost ..."
Nanaverm Sometimes it Can Take Decades Before ..."
"Who is to decide which role models are righteous and which are evil"
bill wald Far-Right Lawmakers are Trying to Erase ..."
"This is how repressive authoritarian states are born. Americans have very serious choices to make, ..."
Steve Bailey Far-Right Lawmakers are Trying to Erase ..."
Browse Our Archives
get the latest updates from
Empathy Mining
and the Patheos
Politics Blue
Channel
POPULAR AT PATHEOS Politics Blue
1