Reprogramming our Minds to Pull Empathy from Hatred

Yesterday was our first day back to school in almost five months. As is normally the case, our school doesn’t jump right into our regular curriculum. We spend the first few days of the school year getting to know each other and trying to build a foundation for a positive school culture. Teachers are given “canned” lessons (produced by outside companies) to help get our students off to a good start. There is value in these lessons, but I normally dread them. I never enjoy teaching other people’s lessons, as I don’t feel I do my best at presenting them. This year is different. The lesson I was assigned to teach was right down my alley. My topic was Tolerance and Acceptance. Now there is a day one lesson I can sink my teeth into! And we dove in deep on day one and really had some great discussion. And I learned some things along the way, too.

The lesson tied the themes of tolerance and acceptance to culture and stereotyping. This was a perfect opportunity to bring current events into our discussion right off the bat on day 1. I took it and ran with it. There was a brief video embedded into the lesson about culture and stereotyping. The very first sentence in that video captured my attention and made me see things in a different way:

“Culture is the collective programming of the mind.”

That sentence leapt off the screen and hit me right between the eyes: wow…I’d never really thought of it that way. My mind started racing with the images of that new revelation. It’s so true. Our culture and world view is all programmed into us by stimuli that is far beyond our control. When I looked at it like that, the door was kicked wide open for empathy to come streaming in. The rest of the video just helped hone it to a razor sharp edge.

When we are born, our brains are empty of knowledge of anything. We only have our instinctual knowledge–I’m hungry, so I’ll cry and hope to get food–I’m wet, so I’ll cry and hope to become dry–I need attention, so I’ll cry and hope to get some–this is all we come into the world knowing. And from day 1 on the earth, our brains start getting programmed. We learn which sounds, smells, and touches are good, and which are bad. We learn faces to trust and faces to fear. We learn to understand different forms of communication and then to communicate. When we are a little older, we are taught what is right and what is wrong, who is good and who is bad, what to believe and what not to believe. Some children are raised in a strict religious environment and some are raised without religion at all. And we have zero control over any of the data that is programmed into our brain. We remain thus programmed until we begin to spend more and more time outside of our little nest. When we start going to school, a new set of adults begin to program new data into our brains. We develop peer groups, each of whom was programmed differently, and we receive new data from them.

Eventually, we become teenagers who are testing the bounds of independence. We begin searching out new data from new sources, the internet, social media, new teachers, new peers, etc. Eventually, we begin to be presented with a lot of data that seems to contradict that of our original programming and we begin to question what real truth is. This is the crucial point in our development–this is the crossroads. Some of us make the decision to begin to reprogram our brains, thus reshaping our world view. Others, when confronted with conflicting new data that challenges their original programming, take on a defensive posture and withdraw back into the confines of their original nest. They begin to develop a fear of anyone who presents them with different data than their original programming.

Case in point: I was raised in a small, all white town in rural Indiana. Everyone in my town looked pretty similar to me. On the surface, we all seemed to share the same values. There were churches on every corner, and I was routinely toted to one of them nearly every time the doors were open, as were many of my friends. But beneath the surface, there were big differences between many of those families of that town. I was lucky enough to be born of devout Christian parents who valued diversity and had progressive world views. They knew that it was possible to live for your values and beliefs and still be tolerant and accepting of those who had different values and beliefs. That was programmed into me. I had nothing to do with it. Others I grew up with in that little town were programmed to believe that “others” were wrong and to be looked at with suspicion or fear. Many of my friends were programmed just like that. Some of those people are still among my closest friends to this day, others I’ve drifted far away from. The difference? The difference happened at that crossroads to which I referred earlier. Some of my friends reached that crossroads and made the decision to venture out and reprogram their minds, others stayed close, dug in, and became entrenched in their original programming.

Fast forward 35+ years to just last week on the streets of my old hometown. There was an event that occurred, was videoed, and went viral. As I watched the video, I wept. To summarize the video, some young white people that live in my hometown joined with some young black people from a more diverse, larger nearby city, to stage a very peaceful Black Lives Matter protest. Before long, a crowd of mostly older white residents were gathered on the other side of the street, some were holding American flags, at least one large Confederate flag was on display, many were wearing Trump 2020 paraphernalia, and one man was in full military regalia complete with what looked to be a Kevlar vest and a semi-automatic rifle strapped to his side. The anti-protestors began to shout lots of ignorant and hateful rhetoric about “all lives matter, this is our town, go back to your town, we don’t want you here” (despite the fact that some on the BLM side were also locals). One man actually loudly proclaimed that the BLM folks needed to “learn their history” and then went on to spout off about how the Civil War was “fought over taxes.” It was all just so embarrassing and sad to watch, especially when I realized that, while I didn’t recognize any of the angry, hateful faces, it’s very likely that I may have used to know some of them, some 35 years ago. But we would have lost touch way back there at the crossroads when my friends and I decided to reprogram our minds and they and theirs decided to dig in and hold on. 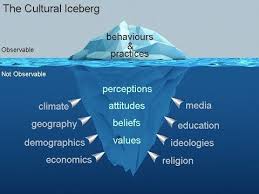 That lesson I taught on tolerance and acceptance used a graphic similar to the one above to illustrate what influences our behavior. We only see the tip of our cultural icebergs. What we witness people doing is normally all we use to make judgements about them. What we don’t see is their history; we don’t see their original programming, we don’t see how much they did or didn’t reprogram themselves, we don’t see the trauma they have experienced that has scarred them to the point where they can be triggered into the kind of fight or flight response that is involuntary, causing them to react in ways they never would if they were thinking clearly. In many of the situations we see in viral videos, people have been triggered and their basest fears take over their actions. We judge the actions (the tip of the iceberg) without considering any of the things lurking below the surface of the water. When we do this, empathy is choked out and we bow to fear ourselves.

The cultural iceberg is at play in the very events that gave rise to the Black Lives Matter movement. Some black people see a racist cop, cold and calculated, mowing down an unarmed man. Some white people see a young thug who is asking for it by resisting. In reality, what we are seeing is two men who’ve been triggered to act abnormally by the trauma that has built up in their collective histories. My history had nothing whatsoever to make me mistrust police. Any time I’ve been stopped by police, the thought that my life might be in danger has never even passed through my mind. Every black person I’ve ever talked to about this assures me that it is the first thing that passes through their minds. That’s two different worlds of culture. For me to say, that black guy should have just done what the police told him to do is the height of ignorance. I am ignoring all that is below the surface of the water. I am ignoring the historic trauma that might have triggered that young man into an automatic fight or flight response beyond his ability to control. And the other side of the same coin is the trauma that might have been triggered within the cop who is always on edge working in those neighborhoods where every eye is cast upon him with suspicion, distrust, fear, or even hatred.

We have a long way to go to work on that level of empathy. Neither side is there, or even close to there yet. If we would explore what’s below the surface of the water instead of focusing exclusively on the iceberg, perhaps empathy would begin to replace hate and tolerance and acceptance will begin to replace bigotry.

July 7, 2020
An Open Letter to President Trump on Behalf of Social Studies Teachers Everywhere
Next Post

August 21, 2020 President Trump, You Are Calling Out the Wrong People for "Hurting God"
Recent Comments
0 | Leave a Comment
"Beyond opinion, ideology, and hyperbole, in the excerpt of Locke's message I count five statements ..."
David N. Gray Can a Democrat Be a Christian?
"There is also the corollary question that havent asked yet, but that they will ask ..."
Raymond Can a Democrat Be a Christian?
"good article overturning roe v wade will not stop people from getting abortions it will ..."
Brandon Roberts Abortion Ban Questions Christians Should Ask ..."
"Churches are shrinking like the polar ice caps, they have delusions of relevance."
Nixon is Lord Jesus and Elon Musk: America’s Income ..."
Browse Our Archives
Related posts from Empathy Mining

Is The Earth REALLY Only 10,000 Years Old?
No.
view all Progressive Christian blogs
What Are Your Thoughts?leave a comment
Copyright 2008-2021, Patheos. All rights reserved.