Confessions of a Mad Journalist (Part 1) 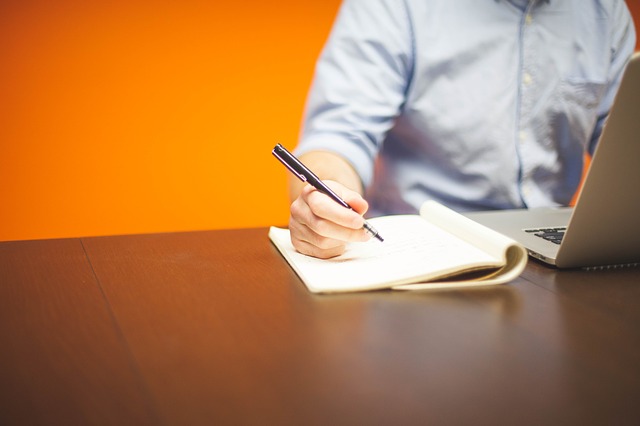 Like most insecure and spiritually frustrated white men in their forties, I keep a journal. Some men hunt. Others play golf. I know one gentleman whose passion is collecting kaleidoscopes. Me, I’ve taken to transcribing the obsessive voices in my head into a handsome series of leather-bound, hand-written manuscripts. Because if you were to secretly hold up a glass to my skull and listen in at any given moment, I’m afraid you would hear a terrorizing barrage of chatter that even a fully staffed NSA would find difficult keep up with: “You better get started on those legal documents if you Oh, did you write that check for the Why was Sally so moody today do you think I did something don’t forget to sign up for the fundraiser Bob’s been asking you about he’ll think you don’t care if you don’t Oh Dear God I can’t believe Sophie has a boyfriend now, they better be careful or else You are really such a lousy time manager and you waste so much when Hey that was funny, wasn’t it, when Gail tripped on the Won’t it be great if Sam buys into that real estate concept I am so sinful why can’t I be more like John he is such a godly man at least it comes across that way Hey what were those sales guys doing in that meeting without inviting me…” Thus the journal is a form of therapy, you might say. Or, it is simply a practical method to organize my random, screaming thoughts.

I have actually kept a journal since college. Back then, the journal-writing mostly reflected upon scriptures and devotions where I would expound upon my spiritually superior state of being. To be honest, those were much simpler times, and you can see that when you read through those entries. They went something like this:

“Today I read in James chapter 1 about not being tossed around like the waves. I thank God my faith is solid and jesus is my redeemer, there is no other. Praise you Lord Jesus! Thank you for saving my soul. I have Calc test tomorrow, and I pray the Lord give me strength to study and recall the material.”

It’s fun to read those early writings from a more innocent era. Sometimes I wonder what it would be like to go back in time and talk to myself then as a grown-up Forty-eight year old. “Dude.” I would say. “Stop praising Jesus and crack open that calc book. No wonder your grades are slipping. Now get to work!” I don’t think I would be too easy on myself.

When I hit my thirties, life naturally became more complicated as I entered the haze of parenting and all the responsibilities associated with full-fledged adulthood. The journal reflected the struggles and dreams of my changing world. I started keeping track of my unfolding life, in all of its excitement and drama: the jobs; career aspirations; navigating my marital relationship; the joy of having children; the burden of growing responsibilities; new questions about my faith and my spiritual journey; and changing church affiliations. There was plenty of self-analysis, hopeful visions, passionate prayers, and even a couple of book reviews. Not unlike this Blog, I guess.

It is interesting now to see how so many of those dreams came true once I wrote them down. It was uncanny, how the very act of writing down a goal, complemented with prayer, would soon manifest itself in one form or another in real life. At one point I wrote this:

“I am feeling restless, wanting to contribute more. I think it’s time that I joined a board…maybe that would provide a channel for this energy and allow me to make some new contributions – make some new connections. Lord, I give this to you.”

I had never been asked by anyone to serve on their Board of Directors before, but within two weeks of that entry I received four different offers out of the clear blue sky to join various boards. I accepted two of them. After describing this amazing coincidence to my family as a testament to God’s hand at work in my life, my daughters begged me to write down their special dreams in my magic book, so that they too could see them come true the way mine did. It wasn’t the same thing, I tried to explain.

By the time I entered my forties, the journal had also become an outlet for processing all of my increasingly heretical and disturbing thoughts. I am afraid that if you were to read from select pages of my journal over the past several years, you might wonder if I would be better off placed securely in a psych ward, or banished forever to an isolated island. My journal became the unfortunate recipient of the deepest fears, anxieties and unfulfilled spiritual longings that prowled around in the darkest depths of my soul. Perhaps most people find it best to suppress their insecurities, or else they privately confide in their spouse, their priest, or their shrink. But for me, it all gets washed out in my journal. Here is an example:

2/21 ” I’m lazy, busy, undisciplined, sinful, that’s how I really feel most of the time. Why do I even care? Thank God He accepts me just as I am but I’m sure He’s also sick and tired of me too. I don’t know what to do or how to be or how much to give up or fight or be myself or be different. Maybe if I stopped spending so much time complaining about myself and more time acknowledging and seeking after God I’d be blah blah blah purpose blah blah blah fulfillment blah blah blah whine whine whine God Jesus blah blah I have no passion blah blah I’m too busy blah”

I did not often reach a spiritual resolution during these existential rants. But the very act of confessing, pouring out my soul in all its ugliness and messiness, eventually led me to a more peaceful and accepting place in my faith.

September 30, 2015 Confessions of a Mad Journalist (Part 2): Overcoming the Fear of Failure
Recent Comments
0 | Leave a Comment
"I am so sorry that you were going through this! I hope that things are ..."
Traci Are You Feeling Stupid At Work? ..."
"I wish my parent acknowledged that I have such right instead of making the bad ..."
Eff me gently with a chainsaw You Have the Right to Make ..."
"I feel so ashamed that I often contemplate suicide. High stress politically driven job combined ..."
Unreal Are You Feeling Stupid At Work? ..."
"Have you seen this version?https://images-na.ssl-image..."
John Gills The Evolution of Christian Branding
Browse Our Archives
get the latest from
Best of Patheos
Sign up for our newsletter
POPULAR AT PATHEOS Faith and Work
1