Wind River and The Death of the “Godly Man.”

A few nights ago, I returned from dropping off my kids and decided I didn’t want to go home right away. It’s always a bit lonely after they leave for their mom’s place. The house is a bit too empty and quiet. I decided dinner and a good movie would help me ease into being kidless for the next two weeks.

I decided to see Wind River, an indie film which has earned a significant amount of buzz since its debut at the Sundance Film Festival. Quick research of the storyline hooked me in an instant. It hit all of my deep loves and concerns: modern Western, murder mystery, Native American issues and struggles, and the vast and surreal landscape of Montana. I prepared myself for a good, tense time at the movies with my movie candy of choice, Bunch-A-Crunch.

Two hours later, I sat in the theater, stunned, hit with a powerful movie that I never expected. As I drove home, I realized what struck so deep and why I cried more than once during the film. Yes, the movie worked as a good “Western-social justice-mystery-thriller.” But, I realized that writer and director Taylor Sheridan gave us what very few TV shows or movies address in a realistic way: a meditation on modern masculinity and the way men process and express grief. It pushed me to consider my own deep seeded wounds and grief I’ve never properly addressed because I needed to “be strong” and “survive.”

Seeing this movie came at an interesting time for me. I’ve watched a discussion in the Catholic Church that has crept in from realm of American evangelicals: Christian men are asking what it means to be a “godly man” in our modern era. At first glance, there’s really nothing wrong with asking the question, at least inherently. But, the problem comes when most men in the evangelical and Catholic worlds are buying into a false set of presumptions that is never discussed in the Bible nor in Catholic teaching. Rather, it comes from a late 19th and early 20 century movement called “Muscular Christianity.” This movement sought to expel everything that was “effeminate, unEnglish (unAmerican) and excessively intellectual.” Athleticism, manliness, domination, rule, power and the subduing of the earth were all encouraged.

In modern times, it’s found its expression in Rad Trad Catholicism, and the teachings of Mark Dirscoll and John Piper on the Evangelical side. Men are encouraged to take authority in the homes, to wage spiritual warfare (without a proper understanding of what that actually means), and to dominate and win. They’re encouraged not to be, in the words of Mark Driscoll, “spiritual pussies.”

To many men, it’s terribly alluring. It punches all of the man buttons and it appeals to many genuine and authentic male traits. But, it does so in all the wrong ways. And, in the end, we end up back into old school muscular Christianity which is a subtle heresy by forgetting that the goal of the Christian life is Union with Christ and to imitate him in all things.

And, when we forget Christ, our masculinity becomes a monstrous idol that destroys everything around us. In Wind River, ordinary men, driven by boredom and a warped manliness, horribly rape and murder a Native American woman and her lover, who fought to protect her.

No, muscular Christianity doesn’t encourage rape, at least not up front. But the reality is, it encourages many practices that are pretty damn close. When we divorce masculinity from Christ and His virtues, a warping and twisting evil results. I’ve heard stories of “sex on demand” with wives encouraging to “give it up” because they are somehow responsible if a man “strays.” Because, they are told, that’s just how men are. These men body shame women to tell them to dress modestly as the men interpret that word, so their bodies won’t tempt to their “animal instincts.”

Or, we have the terrible incident in Salt Lake City where a woman nurse was brutalized by a male cop for not “doing what she was told.” When, in reality, she was doing her job, adhering to the law and standing up for what was right. The Cop’s warped masculinity just didn’t want to hear it. Most heart breaking of all was the woman’s cry of, “what did I do wrong? What’s happening?” Cries all too familiar to abused women around the world.

The rapist and murders of Wind River are the end result of that thinking. Maybe most men won’t take that step, but they still embrace that sense of entitlement. In many ways, they are frighteningly ordinary, just normal “dudes” at first glance. They are teased in an unmerciful way when they express vulnerability. They are told to “toughen up” and not show any emotion. And they blame their terrible act on everyone but themselves: the woman, the man who loved her, the boredom of Montana, the native people, etc and so on, because they wouldn’t give them what they wanted.

But, to fight the darkness of muscular Christianity, Wind River explores what real, Christ-centered masculinity should look like. I have no idea if the film makers are Christians. That’s really not the point. In the characters of Cory Lambert and Martin Hansen  we see this personification of a masculinity centered on Christ might look like.

Cory Lambert (played in an Oscar worthy performance by Jeremy Renner) is a U.S. Wildlife and Game Service agent who discovers the body of Natalie, a Native American woman from the Wind River reservation. She was also the best friend of his own daughter, who died under mysterious circumstances three years before the events of the film.

As he sits with Martin, Natalie’s father, the two men are united in grief, crying in each other’s arms. They both feel like failures for not protecting their daughters, even though, in many ways, they were doing what they were supposed to do. Cory let his daughter be responsible by watching his younger son while he took his wife for a night out. While they were away, his daughter disappeared, most likely killed by an unknown person. Martin tried to let his grown daughter have her space and respected her privacy. He didn’t try to intrude or control her. Even though neither of them can really be blamed, the guilt is unrelenting.

After they settle down, and begin to talk, Cory shares what got him through his own terrible time. A counselor told him that to ignore his grief and try to “man up” would be a huge mistake and it would make him forget his daughter. Instead, Cory needed to embrace the grief, face it and let it make him stronger.

The reflection of Christ is obvious, as he was often known as “Man of Sorrows.” We are told that he cried, shared his real fear and weakness, was open and not afraid to express his loving heart to men and to women. Every wound He received made him stronger and he opened himself to the world by hanging on a cross, suffering the ultimate weakness and exposure. His strength came because he was vulnerable and he failed, and that sort of thinking challenges the absurd foundations of “masculine Christianity.”

Cory finds the murderer and brings justice to his friend. In the final scene, Cory stops Martin from committing suicide, reminding him they both have other people to be responsible for and to protect. But, they both know they can’t do it through being overbearing or exercise domination. Instead, they know they have to continue to be vulnerable, broken, open, servants, listening to women, understanding what they really need (as Christ did), oppose the proud and to fight those who embrace a twisted masculinity that corrupts itself into seeking its own good rather than the good of others.

Sacrificial love is where all discussions of masculinity should begin, not with a false and trumped up masculinity that bears no relation to the Christ it claims to represent. To be a real man, we must die to ourselves and what we consider “masculine.” And, Wind River is a beautiful meditation on the need for men to have wounded heart that strengthens every time it is hurt. 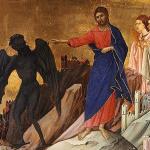 September 1, 2017
Dark Devotional: Get Behind Me, Satan!
Next Post 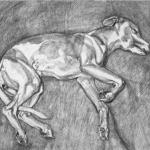