A few weeks ago, a mom of my acquaintance got The Three Little Bears from the library, but was irritated to discover that the story had been bowdlerized for 21st century sensitivities.  Gone were the heteronormative Papa Bear, Mama Bear and Baby Bear. Instead, we just had three genderinoffensive bears, one big, one medium, and one small. What. A. Crock.

But when she posted a picture, I thought, Wait, that’s got to be Paul Galdone, who has been illustrating for a lo-o-o-ong time. I looked it up, and sure enough, this version of The Three Bears came out in 1972. Definitely post sexual revolution, but hardly an era when devious children’s illustrators were stretching the definition of family — at least not in mainstream children’s books.

Following a hunch, I did some quick research, and discovered that the “Three Bears” story was first written down by Robert Southey in 1837, and — lo and behold, the original version was about three male bears. I don’t think they were some kind of transgressive, tradition-flouting bears shacking up in the woodsy version of Castro Street. They were just three bears trying to deal with porridge in the way that they thought best.

Now, I don’t blame the original mom for thinking there was something hinky going on. We really do have to be on constant alert for hidden and not-so-hidden agendas driven by people we wouldn’t trust to boil an egg for us, much less teach our kids what is normal and what is not.  At the same time, being on constant alert can make us a little nutty, and we begin to see bogeymen in every corner,

when sometimes it’s really just your chair with a robe hanging on it in a sinister way.

When I read books that are 25 years old or more, I play a little game:  I scan the illustrations and text to see if anything would jump out at the typical concerned mom if it were written today. Look for it, and you’ll find quite a lot! I’m not even talking about deliberate naughty easter eggs that they’re assuming most people will miss, like what the obviously drunk animators snuck into the backgrounds of ancient Bugs Bunny cartoons

I’m just talking about things that people didn’t used to flip out about, because there wasn’t any real threat of a concerted, deliberate effort to change children’s ideas of what is normal (or the threat was in its earliest stages). Lots of topless people, bottomless people, guys who may or may not be super gay, and so on. These things pepper old kid’s books for decades, and no one batted an eye.  People simply didn’t used to be on high alert at all times.

All that being said, I’m not sure what to make of a strange and hilarious book we just found:  Monsters by Russell Hoban (who, speaking of a chair with a robe on it, did the wonderful Frances books) and illustrated by Quentin Blake. 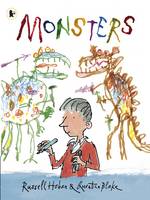 It’s a funny little story about a boy — maybe eight years old — who likes to draw monsters (and oh my gosh, the illustrations are perfect-o): 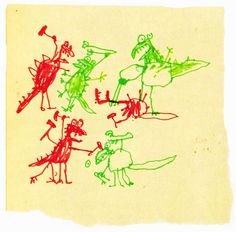 His mother asks him whether he wouldn’t like to draw other things — “houses, trees, birds, and animals” — but he is only interested in drawing monsters.

All of John’s monsters were violent.  They fought with passing strangers and random spacecraft and they fought with one another, and if they found themselves alone they made threatening noises to themselves while waiting for somebody ugly to turn up.
‘GNGGHHHHH!’ they said, “NNARRRGH!” and “XURRRVVV!”

He reassures his worried parents that he is fine, getting along with his teachers fine, getting along with the other kids fine.  One day he begins to draw a monster that is really big — in fact, he can only get parts of its huge, bristly monstrous tail on a sheet of paper. This one “somehow seems more serious than the others.”  The parents are worried, but the art teacher reassures them that “Boys are naturally a little monstrous.” They go to the doctor, who prescribes a pill, and tells them to come back if the drawings keep coming. Which they do.

I won’t give away the end, but the doctor gets what he’s got coming, and the boy ends up feeling much better.

Now, if this book had come out in 2014, Russell Hoban would be served with a lawsuit from Gloria Allred, his cause would irritably championed by Camille Paglia, and Tony Esolen would be offering him a home cooked meal drenched in a gravy of tears of rage and sorrow, and Matt Walsh would be saying something that is sorta kinda true, but making it sound so baboonishly false that you want to disown yourself for even halfway agreeing with him.

It would have been a thing, you see, a big thing about how boys are treated, how their natural masculinity is medicated into oblivion, and what monstrous things will eventually happen when boys are not allowed to be boys, or what it is that we are saying to girls by not saying that they are naturally a little monstrous, and so on. But the book is from 1991, when we were still teetering on the brink of Always Being Hysterical All the Time About Everything Especially, ESPECIALLY, What We Are Teaching Our Children.

Uphhh, I’m just so tired. So tired of having to figure out what’s appropriate, what’s inappropriate, what’s sending the wrong message, what’s playing into the whole “sending the wrong message” nonsense, and so on. It’s almost a relief to know that kids tend to remember things you weren’t even aware of telling them, and they forget the things you all but tattooed into the inside of their eyelids.

Anyway, I really like Paul Galdone, because he always draws pictures of what is actually going on in the story; and I really like Russell Hoban, because he really remembers what it’s like to be a kid. Thus endeth my analysis. I’m gonna go draw some monsters.

March 18, 2014
At the Register: Why we can't have baptisms during Lent
Next Post

March 18, 2014 Ever wonder what your husband does at work all day?
Recent Comments
12 Comments | Leave a Comment
"Can The Jerk have this space now that you're done with it? I mean, it's ..."
Josh I’m moving!
"Thank you."
JohnHoward The hardest part of being a ..."
"[It isn't wrong.]Prove it."
Proud Amelekite The hardest part of being a ..."
"Wonderful Ideas for newborn baby and their parents also, its good to give them handmade ..."
Jeff Mccoy Welcome, baby! 12 gifts that new ..."
Browse Our Archives
Related posts from I Have to Sit Down

Catholic
12+ Scary Movies Our Kids Loved (including at...
I Have to Sit Down
TRENDING AT PATHEOS Catholic