Plato comes to life in DreamWorks “The Croods” 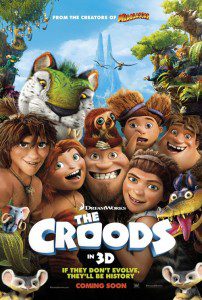 In “The Croods,” the prehistoric caveman Grug (voice of Nicolas Cage) is the head of the Crood family. These beings believe they are the only creatures of their kind in existence. They live somewhere on the earth in a dark cave and only go out during the day if necessary. Grug tells the younger members of the family — Eep (voice of Emma Stone), Thunk (voice of Clark Duke) and Sandy (Randy Thom) — the same bedtime story every night: Obey the rules of the cave that are marked on the walls and they will survive. Ugga (voice of Catherine Keener) is not as fearful as Grug, and Grug has no patience with his mother-in-law Gran (voice of Cloris Leachman), whom he finds an inconvenience. Eep is adventurous and dismisses her father’s fears.

But their world is changing, and an earthquake starts them on a journey to find safety. One day, Eep, who believes she is alone, runs into a young nomad named Guy (voice of Ryan Reynolds), who has a talking belt — a pet sloth named, well, Belt (voice of co-writer Chris Sanders) — that keeps his garment in place. Guy meets the parents and Grug is not impressed; indeed, he just wants to head for the nearest cave. Then as the earth keeps changing, Guy demonstrates fire and how it can bring light to the darkness of the cave. Guy encourages the Croods to move toward the light, the sun, in order to survive.

But Grug disagrees, though he does not know why. Guy speaks about ideas and inventions to solve problems and meet their needs for survival. Guy is self-aware; he and the females in the story have consciousness. Grug continues to move slowly until Guy says, in the movie’s funniest line, “Come on, if you have a speed faster than wander.”

“The Croods” is a 3-D animated feature from DreamWorks, and the premise and dialogue are quite sophisticated. On the one hand, the writers, Sanders and Kirk De Micco, seem to have adapted for mass consumption the Greek philosopher Plato’s Allegory (or Analogy) of the Cave and the metaphor of the cave, the sun and the line in his “Republic.” On the other hand, they could be telling the story of the evolution of mankind from animal to human. Perhaps it is both.

Click here to continue reading on my NCReporter blog:  Plato comes to life in ‘The Croods’

March 20, 2013
"Francis and the Sultan" documentary released with great timing
Next Post

March 25, 2013 'Starbuck' the hilarious tale of moral dilemmas and unintended consequences
Recent Comments
1 Comment | Leave a Comment
"When did this receive and Academy Award?"
Chrys Who Invented the “Jump Shot”? New ..."
"Character matters. Yeah? What then? Look what sort of character is running to grab power ..."
ounbbl The Hopeful Relevance of “The American ..."
"lol wut"
Bloodeagle 1917 is a relentless video game-like ..."
">To each their own I supposeSo you admit you wasted your time writing what you ..."
GoldRushApple Doubt the Movie
Browse Our Archives
get the latest from
Entertainment
Sign up for our newsletter
POPULAR AT PATHEOS Entertainment
1