‘Starbuck’ the hilarious tale of moral dilemmas and unintended consequences 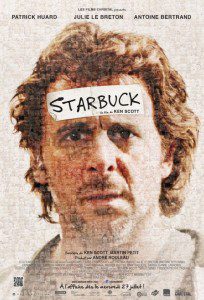 David Wozniak (Patrick Huard) is a 42-year old loveable ne’er do well whose code name was “Starbuck” at the Montreal fertility clinic where he was a habitual donor 20 years ago — and with good reason. The owner of the clinic illegally used his semen so often that 140 of his more than 500 children are suing him so they can know who he really is. David earned more than $28,000 for his sperm donations over a few short months.

He consults his wannabe lawyer friend (Antoine Bertrand) when he is slapped with the subpoena. The lawyer (nameless in the film) is a dad with four children, who come outside to sleep in the sandbox in the middle of the night as the men talk. He begs David not to procreate. But it is too late: In addition to David’s anonymous children, his police officer girlfriend Valerie (Julie LeBreton) is pregnant. She is reluctant to accept his marriage proposal because he never takes responsibility for anything. Right now, he is in debt for $80,000 to the mob who come and rough him up every so often to get their money back.

Wozniak and his two married brothers work for their widowed dad (Igor Ovadis) in the family butcher shop. Their father came to Canada from Poland and built the family business from nothing. A Catholic family, they were crushed when their beloved wife and mother died years before. A crucifix and the image of Pope John Paul II hang in their home.

David’s lawyer friend urges him not to read the biographies of the plaintiffs, but he does anyway. The first one is a national soccer star, and David cannot stay away. The next one is an aspiring actor; the next, a drug addict. Raphael has cerebral palsy and is in a home. David begins to look them up and enmeshes himself in their lives without revealing his identity.

One of his “sons” picks the lock of David’s apartment and confronts his “dad,” saying: “We are here. We are alive. And we are not going away.” It’s as if he is saying, “It’s not our fault we were born via a petri dish and we had no father or don’t know who our biological father is. We demand to be recognized!” This is as close as it gets to any serious consideration of the consequences of sperm donation.

March 21, 2013
Plato comes to life in DreamWorks "The Croods"
Next Post

March 30, 2013 Where are the irises gone? An Easter poem with greetings from Sr. Rose
Recent Comments
1 Comment | Leave a Comment
Browse Our Archives
get the latest from
Entertainment
Sign up for our newsletter
POPULAR AT PATHEOS Entertainment
1