“No Place on Earth” is the incredible story of Ukraine’s holocaust survivors April 12, 2013 Sister Rose 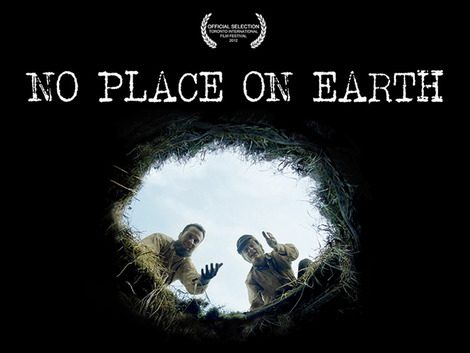 In 1993 Chris Nicola, a cave explorer from Queens, NY, was in western Ukraine to research his family tree. While there he decided to explore some the country’s famous Gypsum Giant caves that extend for about 77 miles underground. In fact, he was the first person to ever do so. Deep in one of the caves he came across some artifacts: a cup, a shoe, a comb, buttons, medicine bottles.  He realized that these items belonged to someone, were part of someone’s life and started to ask questions. Finally some of the older folks told him to ask the Jewish people in the area.

Nicola discovered that members of a few Jewish families hid underground for a year and a half, 511 days, and 38 survived the holocaust. This is remarkable since 90% of Ukrainian Jews were exterminated in World War II. In fact, Nicola discovered that one man who had lived in the caves now lived near him in New York.

One thing led to another and in 2004 National Geographic published the story. “No Place on Earth” documents this deeply moving story through interviews and gripping cinematography by Cesar Charlone (The Constant Gardner; City of God).

The most engaging parts of the film are interviews and commentary by the survivors who tell their stories with clarity of recall and immense charm. These add drama and enhance the film because these let audiences know what courage and perseverance look like when they are integrated into a person over a lifetime.  To see some of the people return to the caves at the end of the film, and try to enter the cave called the “Priest’s Grotto” (not clear why it is names that) through the small hole in a field, well, I could only wonder at their determination, the very force of their character.

Director Janet Tobias said that she decided to be part of this project because Saul Wexler, one of the survivors, recounted how they would rejoice when they returned to the caves after going out to search for food. “They would wipe the mud off and they would sing” because they were free men inside the dark cave. “The dark, scary places were actually where safety was, and outside in the light, were the monsters.” Their world was turned upside down: and heaven and earth were switched.

During World War II the Jews of the Ukraine had no place on earth, so they went under and inside the earth to survive.

“No Place on Earth” is a riveting documentary that can only inspire.

April 15, 2013 The Life (and Lies) of David Gale revisited
Recent Comments
0 | Leave a Comment
"When did this receive and Academy Award?"
Chrys Who Invented the “Jump Shot”? New ..."
"Character matters. Yeah? What then? Look what sort of character is running to grab power ..."
ounbbl The Hopeful Relevance of “The American ..."
"lol wut"
Bloodeagle 1917 is a relentless video game-like ..."
">To each their own I supposeSo you admit you wasted your time writing what you ..."
GoldRushApple Doubt the Movie
Browse Our Archives
get the latest from
Entertainment
Sign up for our newsletter
POPULAR AT PATHEOS Entertainment
1