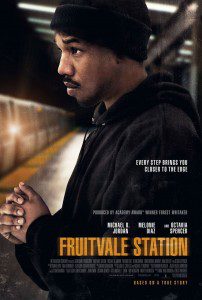 (I wrote this review for the National Catholic Reporter after seeing the film at the Sundance Film Festival in January 2013 where it took top honors).

Just after midnight on the morning of Jan. 1, 2009, a fight broke out on the BART subway system as it pulled into the Fruitvale stop in Oakland, Calif. When the transit police arrived, the fight subsided, but the cops pulled off several black men who looked like perpetrators and made them sit along a wall, pointing Tasers at them. The men were resisting, but not in a threatening way. Oscar, who was on parole but clean and not drunk, was obviously worried. A cop pulled out a gun and shot him. Oscar was taken off life support a few hours later, and the shooting was almost immediately ruled a homicide. This happened because many cellphone videos of the police kicking the men and then shooting Oscar were on YouTube practically before the EMTs got Oscar to the hospital.

This stark film by first-time director, 26-year-old Ryan Coogler, chronicles the life of Oscar over the 24 hours that preceded the shooting. Oscar, 22, an unmarried and unemployed father of a 5-year-old girl, was no saint, but he was trying to grow up and clean up his life. He had a kindness about him that was very appealing. If you get to see this film, you’ll notice the filmmakers’ technique of showing on screen the texts Oscar sent and received. If other films employ this, it could become a cliché, but here it is powerful because of the role that cellphones played in attaining a modicum of justice for Oscar Grant. This film could get a top Sundance prize, at least if you go by the buzz.(Editor’s note: On Sunday, “Fruitvale” was indeed awarded the U.S. Grand Jury Prize: Drama.)

July 19, 2013 "The Hunt" how rumors and gossip can kill a reputation
Recent Comments
0 | Leave a Comment
"When did this receive and Academy Award?"
Chrys Who Invented the “Jump Shot”? New ..."
"Character matters. Yeah? What then? Look what sort of character is running to grab power ..."
ounbbl The Hopeful Relevance of “The American ..."
"lol wut"
Bloodeagle 1917 is a relentless video game-like ..."
">To each their own I supposeSo you admit you wasted your time writing what you ..."
GoldRushApple Doubt the Movie
Browse Our Archives
get the latest from
Entertainment
Sign up for our newsletter
POPULAR AT PATHEOS Entertainment
1