“The Hunt” how rumors and gossip can kill a reputation

“The Hunt” how rumors and gossip can kill a reputation July 19, 2013 Sister Rose 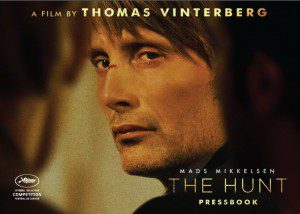 For more than twelve years the subject of pedophilia and clergy sex abuse cover up has been in the headlines. Now from Danish director Thomas Vinterberg comes the story of Lucas (Mads Mikklesen) a 40 something divorced dad, who is working as a pre-school teacher because his middle school teaching job was eliminated. When he is accused of showing himself to one of his students, a little girl named Klara (Annika Wedderkopp) who is the daughter of his best friend, his life careens into an abyss.

“The Hunt” is an extremely well crafted drama and our sympathy is firmly with the accused because we have all the details, or at least we know more than the people of a town that turns violently against this ordinary man who is trusted and well-liked and is friends with most of them. (We know actor Mads Mikklesen from the last year’s “Royal Affair” and NBC’s freshman series “Hannibal.”)

Lucas and Klara walk to school together most days. She takes his hand because she has known him all her life and trusts him. He knows her parents well and knows that they bicker a lot. At the pre-school, Lucas observes almost all the best practices about how to interact with children. But one day after carousing with the children, Klara kisses him on the mouth. He is shocked and tells her that this is not how to behave, to kiss someone outside of her family on the mouth. She is embarrassed and tells a teacher he has exposed himself to her.

What no one knows, and never finds out, is that Klara is truly lonely and deeply affected by her parents fighting. Her older brother and his friend show her pornography that confuses and disturbs her.

The principal begins by following protocol. She reassigns Lucas to other duties away from the children without explaining why, only that one of the children has reported him. But she soon tells the other teachers and life at school is unbearable. He stays home. Rumors fly. An interview with someone, a man, sent from the school officials, is very leading and Klara’s story seems to become more detailed. Lucas’ girl friend believes him as does his teen son who arrives for the Christmas holiday. But his former hunting pals, who run the local grocery, refuse to let him shop there and someone kills his beloved dog.

One of the saddest moments is at the Christmas midnight service at church when the gossiping principal leads the innocent children, including Klara, in singing carols. Lucas can no longer take the shunning and punches out a man who has been taunting him.

Lucas asserts his innocence and when the case finally comes to trial he is acquitted due to lack of any evidence. The little girl realizes she did something to hurt her family’s friend but does not really understand. She tries to explain to her mother at one point about what happened, but the mother is already convinced that the child was molested, or that some kind of abuse happened, and does not listen.

A year later Lucas and all his former friends gather at a hunting lodge for their annual outing, and things seem to be back to normal. Klara wants to be near Lucas as before, but he gently avoids her. Then out in the forest someone takes a shot at Lucas and we know that he will be doubted, untrusted, and his reputation damaged, for the rest of his life.  He is on notice that his life can be taken at any moment and it will look like a hunting accident. And these are his friends who will always be on the hunt for a sign of his guilt.

Because how do you disprove such an accusation?

A film such as “The Hunt” in our country, or any countries, where clergy (or any other institution’s) sex abuse has occurred and was covered up, is probably not going to be that welcome. But like Pope Francis has been preaching, gossip, this spreading of rumors, can ruin lives. Given the little girl’s experiences one can understand why she said what she said and because she is a really young child, her actions excused. But it’s what the principal started, by not continuing to follow protocol, by spreading innuendo and rumors that burgeoned as they went from teacher to teacher, parent to parent, throughout a town.

But how do we know if Lucas was innocent, really?

Can we ever be sure?

July 19, 2013 "Nicky's Family" tells of a man who saved 669 Jewish children in Prague
Recent Comments
0 | Leave a Comment
"When did this receive and Academy Award?"
Chrys Who Invented the “Jump Shot”? New ..."
"Character matters. Yeah? What then? Look what sort of character is running to grab power ..."
ounbbl The Hopeful Relevance of “The American ..."
"lol wut"
Bloodeagle 1917 is a relentless video game-like ..."
">To each their own I supposeSo you admit you wasted your time writing what you ..."
GoldRushApple Doubt the Movie
Browse Our Archives
get the latest from
Entertainment
Sign up for our newsletter
POPULAR AT PATHEOS Entertainment
1