“The Conjuring” – are horror films C(c)atholic? 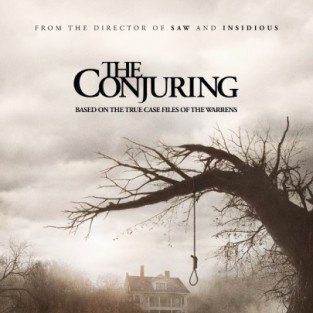 The first horror film I ever saw at age eight, indeed the first film I ever saw in a theater, was the 1959 House on Haunted Hill. It starred Vincent Price, and I now know it was directed by William Castle, called “the poor man’s Hitchcock,” who churned out many “B” thriller movies. Although Castle’s genre was the psychological thriller, his films are subgenres of horror. House on Haunted Hill was projected in “Emergo”, one of the gimmicks Castle was known for. In this case it meant that a large fluorescent inflatable skeleton drifted above the audience in some theaters during a scene when a skeleton rises from a vat to pursue the depraved wife of Price’s character. I have no memories of a skeleton in the movie theater, but who can forget Vincent Price’s voice? I also remember a woman laying on a table and a huge knife coming through her chest from beneath.

I should note that this was on Christmas day when my sailor dad was home on leave and to make us happy he let us choose from the newspaper what movie we wanted to see. My younger brother and I chose this film while my dad and older brother went to see DeMille’s The Ten Commandments. My mother was not pleased. William Castle later produced Rosemary’s Baby (1968), the psychological horror film directed by Roman Polanski.

Although I have no particular liking for the horror genre, people have strong opinions about these films. Some appreciate and even like horror while others may dislike all horror or some subgenre expressions of it. This article will argue that horror is a legitimate film genre, and that horror films have a Catholic Christian core and are accessible to a universal, that is, small “c” catholic audience. I will ask if the horror genre and many of its subgenres explore Christian theology and the human reality in relation to the divine and demonic or evil, so as to suggest or reinforce faith in God and hope? Likewise, is the horror genre catholic in the small “c” sense in ways that reveal the dignity and truth of the human person with free will, and engage and perhaps assuage human fear? I contend that horror films attempt to exploit human issues and create a confrontation between human and supernatural strengths and weaknesses and draw from and/or reinforce Catholic Christian theology. And this, all the while, as Alfred Hitchcock used to say, scaring the hell out of audiences.

The Genre and Sub-genres

There are many subgenres or overlapping genres to horror, from grindhouse (raw, explicitly violent, and gorey) to science fiction and aliens, to gothic (e.g. Hammer horror films from the UK), to vampires and even humorous undead horror such as the 2004 Shaun of the Dead about a young salesman who has no focus in life and has to cope with relatives, family, friends, and a zombie attack and infestation.  An Iraq war veteran told me that this was the movie his unit watched over and over during down time. I asked why, and he shrugged his shoulders and said, “I don’t know. It’s funny, and we all liked it. It got us out of there for awhile.” Sometimes I wonder if it was more than this, that maybe the movie was a metaphor for their lives and how they saw and experienced the situation in which they found themselves: isolated, out of control, fearful, and chaotic.

In 1995 the Vatican published a list of “Important Films” marking the 100th anniversary of cinema.  Under the category of “art,” F. W. Murnau’s silent vampire horror classic Nosferatu: a Symphony of Horror is listed. It is an adaptation of the 1897 novel Dracula by the Irish author Bram Stoker. Christians will recognize theological elements throughout the film but some think it is more haunting than scary.

Peter Malone, MSH, a Bible scholar and film critic (and Reel Spiritualuty contributor), distinguishes between horror films and terror films. “Of course, there is terror …

July 15, 2013 "Fruitvale Station" witness to justice via social media
Recent Comments
0 | Leave a Comment
Browse Our Archives
get the latest from
Entertainment
Sign up for our newsletter
POPULAR AT PATHEOS Entertainment
1