“The Way, Way Back” is the summer movie to see 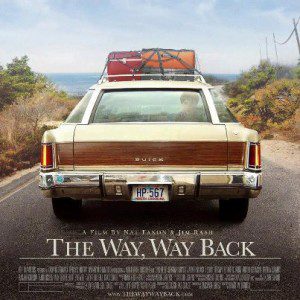 In this summer’s gentle and extremely funny and touching coming of age film, Steve Carrell plays Trent,who is a real jerk under the guise of being future husband and step-father material. And he gives up comedy and hands that crown to Sam Rockwell and team at the coastal splash park where 14 year-old Duncan (Liam Jones) gets a job to get out of the beach house where he, his mom (Toni Collette) and Trent’s daughter are staying.

The film opens with the two adults and teens driving in a vintage station wagon to the shore with Duncan in the way, way back seat, facing where he has come, and listening to the overbearing hypocritical Trent belittle him while his mom says nothing.

Duncan is lonely, Allison Janey as the next door divorced mom, is very funny and annoying as she tries to hide her inner pain. Duncan runs into Sam Rockwell’s Owen a couple of times then meets him at the splash park that he supposedly owns and operates. Owen senses Duncan’s situation and hires him and Duncan’s life training begins.

I was surprised by the humor, pathos, genuine comedic acting and dialogue delivery. Maya Rudolph as Owen’s assistant realizes she’s been dealing with a Peter Pan for three years and is about to call it quits in frustration but then witnesses how Owen is with Duncan and knows there is more to the man as he finally gets up on time to do some of the work.

I love this movie and there is so much to recommend it to teens and adults.

“The Way, Way Back” is about waking up, growing up, making choices for the good of children, and hope.

If I could give out an Oscar today it would go to Sam Rockwell – he’s brilliant in this independent film. If there were an Oscar for best ensemble performance, “The Way, Way Bacl” would get it.

July 15, 2013 "The Conjuring" - are horror films C(c)atholic?
Recent Comments
0 | Leave a Comment
"When did this receive and Academy Award?"
Chrys Who Invented the “Jump Shot”? New ..."
"Character matters. Yeah? What then? Look what sort of character is running to grab power ..."
ounbbl The Hopeful Relevance of “The American ..."
"lol wut"
Bloodeagle 1917 is a relentless video game-like ..."
">To each their own I supposeSo you admit you wasted your time writing what you ..."
GoldRushApple Doubt the Movie
Browse Our Archives
get the latest from
Entertainment
Sign up for our newsletter
POPULAR AT PATHEOS Entertainment
1