Now is the moment I've been waiting for. Here comes the much-anticipated, elaborately set up scene in which the Steeles attend the evening service for "the disenchanted and the skeptics," where the Rev. Bruce Barnes, speaking for the authors, will justify and defend the theology of Left Behind.

This is exciting. Here it comes:

Chloe had gone with [Rayford] to the church meeting for skeptics the night before, as she promised. But she had left a little over halfway through. She also fulfilled her promise to watch the video the former pastor had taped. They had discussed neither the meeting nor the video.

Pages of build up, redundant layers of phone calls establishing that Rayford, Chloe and Bruce would all be there, repeated passages of foreshadowing and scene-setting promising that the hard questions would be dealt with, soon, and at length, and then this is all we get? Two lousy, contentless, after-the-fact sentences explaining that the scene in question has already occurred, off-stage, and that we won't ever learn what happened there.

Chloe left a little more than halfway through the meeting. Why? Did she storm out because Bruce Barnes was being as smugly evasive as the authors? Or was she just bored to tears? Did Rayford leave when she did, or did she have to hang out in the parking lot waiting for a ride home? Was she uncomfortable throughout the meeting, or was she reacting to something specific Bruce said that prompted her to leave just then? What of the others there? Were some persuaded to stay and join Bruce's mid-apocalyptic congregation? Or did they all, like Chloe, get up and leave with their skepticism unanswered and intact? And, in either case, what did Bruce say to make them respond however it was they responded?

Instead of all that, we get to ride along with the Steeles as they drive to the airport the next morning and discuss a few vague impressions of the meeting.

This is Rayford's first trip back to O'Hare since he fled it six days ago, threading his way across the tarmac through scattered charred bodies and the wreckage of multiple airliner crashes. It must have been a very busy week at the airport, as everything there has apparently been cleaned up and restored. Rayford is too distracted even to notice this Herculean achievement of post-disaster logistics. He's too busy trying to figure out how to talk to Chloe about her status as a sinner in need of salvation, and he's not sure how to do that. To his credit, I suppose, he realizes that the approach he plans to take with Hattie Durham — seducing her into heaven — would be inappropriate with his daughter.

On the drive to the airport:

They saw more than a dozen homes that had been gutted by fire. Rayford's theory was that families had disappeared, leaving something on the stove.

Rayford has been driving around for the past week — to the church and back three times, over to Arlington Heights for lunch — and this is the first time he has noticed anything like this, the first time since the day of the disappearances he has seen firsthand the slightest trace of the aftermath. I picture Jerry Jenkins typing away, trying to figure out how he can bring up the subject of the disappearances during the Steeles' conversation on their way to the airport. Hmm, maybe they could pass some burned-out houses? Perhaps, fleetingly, it occurred to Jenkins that this sort of detail ought to have been mentioned elsewhere as well. Maybe he should go back and rewrite some of the earlier …? No. No time for that. He promised Tim a first draft by the end of the month. And if that first draft is good enough for Tim, it ought to be good enough for everyone else.

Rayford's "something on the stove" theory for the fire-gutted houses seems plausible to me. Editing the police and fire briefs for a daily newspaper makes me acutely aware of the dangers of unattended cooking and improperly disposed of smoking materials. (I'd like to think that, somewhere, at least one house was gutted by fire after a couple disappeared and their post-coital cigarettes set the mattress ablaze, but that probably doesn't square too well with L&J's outlook, which only allows one kind of rapture per family.)

The sight of this relatively modest reminder of the global disaster sparks a conversation that serves as a kind of Cliff Notes summary of the meeting we missed the night before. Instead of several (Dozens? We have no idea how many attended the meeting) different skeptical perspectives, we will have only one, Chloe's. And instead of the Rev. Bruce Barnes responding with the knowledge he learned from his years in the ministry, we have only Rayford's uninformed gut reactions. But such as it is, the conversation affords our first glimpse of L&J's responses to the objections of the skeptics.

"And you think this was God's doing?" Chloe said, not disrespectfully.

"I thought he was supposed to be a God of love and order," she said.

"I believe he is. This was his plan."

Ah, "It's all part of God's plan." That can mean several different things. It can be the bewildered submission of Job, "Though he slay me, I will serve him." Or be a kind of desperate, unpersuasive Panglossianism. A common variation on this latter response occurs at funerals, when some well-meaning soul hits the bereaved with something like Romans 8:28. That won't work here, in LB, because the reassurance that suffering will work out for the best in the end isn't terribly reassuring when you're already at The End and there's nothing but the suffering.

Chloe's real objection is a matter of theodicy, the fancy term for the problem of evil. That's a Big Question. For my money, it's the most important of the Big Questions. I didn't expect Rayford Steele to have a satisfactory answer, but I would have expected something better than his evasive, kick-the-can, turtles-all-the-way-down response:

"There were plenty of tragedies and senseless deaths before this."

"I don't understand all that either," Rayford said. …

If only he'd stopped there. Stop there and you can take your seat beside Job and join in the great call and response you can hear in any AME church: "God is Good." "All the time." And you can say it as a declaration of faith, one that suggests both that God is good and that that which is not good is not of God. That declaration, however, seems incompatible with the world of Left Behind, in which death and suffering rain down from God's own hand and God seems to delight in all manner of deeds that God's children, because they are God's children, regard as evil. 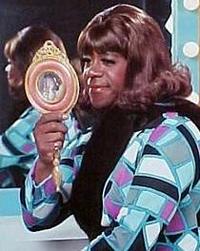 So Rayford doesn't stop there.

"I don't understand that either," Rayford said. "But like Bruce said last night, we live in a fallen world."

If only he'd stopped there. This is still salvageable. But he doesn't stop there either.

"I don't understand that either," Rayford said. "But like Bruce said last night, we live in a fallen world. God left control of it pretty much to Satan."

Ah, yes, the theodicy of that great theologian, St. Geraldine. If God is all powerful and all good, then why is there suffering and evil? "The devil made me do it."

The Big Questions, the meaning-of-life type questions, also matter in the day to day. If you believe that the world is "pretty much" in the control of Satan that's pretty much going to shape not just what you say in conversations like the one above, but also things like how you vote, how you treat your neighbors (the subjects of Satan), how you spend your time, your money, your life.

"God left control of it pretty much to Satan." Just kick that one around in your head for a while.

Progressive Christian
'One will be taken, and one will be...
slacktivist

Progressive Christian
NRA: How not to evangelize, Step 1
slacktivist

Progressive Christian
The Left Behind franchise is coming for your...
slacktivist