“I sit on a man’s back choking him and making him carry me, and yet assure myself and others that I am sorry for him and wish to lighten his load by all means possible … except by getting off his back.” — Leo Tolstoy

I like this idea very much — in theory. In practice, I’m not so sure.

On November 6, 2012, Election Day, we will exercise our right to choose.

But that evening while our nation turns its attention to the outcome of the presidential election, let’s again choose differently. But this time, let’s do it together.

How is this to work in, say, Minnesota, Maine, Maryland or Washington?

What I mean is, we’re talking about communion here — the Lord’s Supper, breaking bread together in Christ’s name. And that communion ought to include everyone, just as the ECD folks insist it should. Political differences shouldn’t keep us from Christian fellowship. 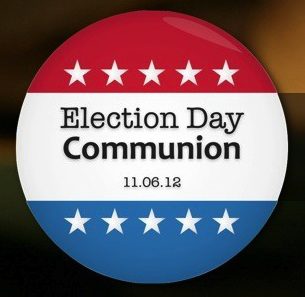 So far so good. Except that in Minnesota, Maine, Maryland and Washington, this election is also determining the civil rights of LGBT people.

So Joe Christian shows up this evening for Election Day Communion in, say, Havre de Grace, Md., and takes his seat in the pew. To his right is a family, two women and their children, whose civil right for legal recognition of their marriage is on the ballot this Election Day. And sitting to Joe’s left, at the other end of the pew is another family, a husband and wife who just voted against the civil rights of the first couple.

This isn’t a matter of simple social awkwardness or wounded feelings. This has to do with justice and with injustice.

Given that, it seems to me that Joe can break bread in fellowship with one family or the other, but not with both. To join in communion with the family to his left would be to overlook the actual harm that family has just done and is doing to the family to his right. It does not seem right or proper for Joe to disregard that harm and dismiss it as inconsequential. It is not right to pretend that this does not really matter to real people.

Nor would it seem right for the families there in the pew with Joe to participate together in this ritual of unity. Even to ask that family to the right to do so seems to me to compound the harm that has been done to them.

And here, I think, we’re back in the ugly arena of compulsory forgiveness. We’re back in the realm of saying, “You really need to forgive your brother in Christ for standing on your neck” as though the Christian under the boot, and not the one wearing it, was the problem.

We discussed this earlier this year — see: “Mercy for the downpresser man is not the first step. Or the second, or third” and “Trying to get down to the heart of the matter.” The conclusion of that latter post, I think, sums up what’s behind my reservations about Election Day Communion:

If you are to grant me forgiveness, then, it can only happen if I come to you in powerlessness — if I accept that my request for forgiveness grants you all the power in the equation. Pharaoh can only be forgiven when he bows down before the former slave he has wronged.

This reversal, this correction, of the imbalance of power is why forgiveness can bring healing to both parties in the transaction. It’s like the leveling sung of by Mary or preached by John the Baptist. It brings down the powerful from their thrones and lifts up the lowly; it fills every valley and makes low every mountain and hill. The powerful are brought low and the powerless are lifted up. The powerless are empowered.

The counterfeit of coerced or compulsory forgiveness cannot do this. There can be no leveling if the powerless are required or demanded or expected to surrender their forgiveness before the powerful are brought low. Any talk of forgiveness for one who has misused or exploited power over others that does not grant power — all the power — to those others becomes, itself, a second misuse and exploitation of power. It’s a sham and a scam that has nothing to do with real forgiveness at all.

Again, I appreciate the idea of Election Day Communion, but it risks trivializing the enormous stakes today for many millions of people by treating all political disagreements as little more than angry looks exchanged between neighbors with different yard signs. We need to confess those sorts of sins to one another as well in the days that follow an election — “I’m sorry I called you names,” “Forgive me for losing my temper,” etc.

But if that’s the main post-election problem in your congregation, then your first prayer shouldn’t be one of confession or communion. It should be a prayer of thanksgiving for the enormous privilege of being wealthy and healthy and “normal” enough that you didn’t have far more at stake.

November 6, 2012 Election night open thread
Recent Comments
25 Comments | Leave a Comment
"Not because he said so, even! Worse! He declassified them by thinking it!"
MadGastronomer 9/28 Flashback: Politically correct
"You are just determined to be ignorant about this, aren't you?"
MadGastronomer 9/28 Flashback: Politically correct
"As the Boy Scout said to the priest in Air Force One, after TFG jumped ..."
dejlah 9/27 Flashback: Butchers
"I'm sure that's the endgame."
dejlah 9/27 Flashback: Butchers
Browse Our Archives
Related posts from slacktivist