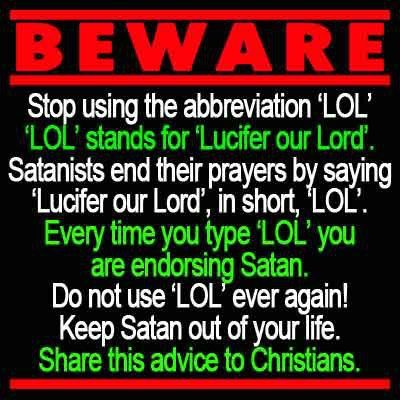 If you can’t view that image, it says:

BEWARE: Stop using the abbreviation “LOL.” “LOL” stands for “Lucifer our Lord.” Satanists end their prayers by saying “Lucifer our Lord,” in short, “LOL.” Every time you type “LOL” you are endorsing Satan. Do not use “LOL” ever again! Keep Satan out of your life. Share this advice to Christians.

This is a lie. It is an obvious, intentional and ridiculous lie.

It’s not true, and no one is really stupid enough to believe it’s true, but they find the game of pretending it is to be titillating.

It’s exciting to pretend you’re standing up against Satan. It’s pleasant to imagine that you are more righteous than your Facebook friends because you avoid the abbreviation LOL. What a convenient tribal marker to set you apart as a heroic, good and godly person.

And what a rush, pretending that you have secret knowledge that others must turn to you to receive. You are enlightened, they are benighted. They should listen to you so you can set them straight and save them from Satan and all his satanic monstrosity.

We can laugh at the nonsense of that Facebook version of Satanic panic, imagining that those passing it along are just too naive, ignorant or dim to know any better. But that’s not the dynamic here. They do know better. This isn’t stupidity or ignorance, it’s pride.

Pride makes the deception attractive, and embracing the deception — immersing yourself in it — requires you to reject reality in favor of something else.

The end result is something that may appear indistinguishable from appalling ignorance, but it’s a different disease with a different cure.

Here is another version of the exact same delusional nonsense:

Planned Parenthood of South Florida and the Treasure Coast offered the special, saying, “Visit our West Palm Beach or Kendall Health Center for special after Thanksgiving savings on Friday, November 23rd.” It appears you would have been able to save $10 on the murder of your unborn child yesterday.

It makes things a bit easier, doesn’t it? After all, who doesn’t want “cheap and easy” for discarding the unborn? We might as well get it done between our trip to Starbucks and our Black Friday shopping.

This is a lie. Two health clinics in Florida offered $10 discounts for office visits on Friday for patients getting well-woman check-ups, contraception consultations or STI screenings. Not abortions. (And, seriously, how much of a raging misogynist asshole do you have to be to even imagine that a $10 discount would create some kind of incentive for getting an abortion?)

This lie is as obvious, as intentional and as ridiculous as the “LOL” lie at the top of this post. And it is being told for all of the same reasons.

The blogger at “Front Porch Politics” is lying because it makes him feel good about himself. He is lying to make himself feel righteous by imagining others to be demonic. He is lying so he can pretend he has secret knowledge that others must rely on him to bestow. He indulging in a role-playing fantasy in which he battles Lucifer Our Lord, a lonely enlightened hero in a benighted world. He is lying in order to invoke tribal markers that he believes set him apart as heroic, good and godly.

And he is writing for others who wish to participate in the counterfeit emotional rewards of this delusional lie.

This invitation to deception is not true or right or good. But it is very popular among evangelical Christians desperate for some way to at least briefly feel like they are heroic, good and godly.

Lies, pride and willful delusion. That’s the cancer at the core of American evangelicalism, the corrosive rot that has turned bearing false witness into a spiritual discipline. LOL.

November 27, 2012 Never side with the boss against the people who handle your food
Recent Comments
123 Comments | Leave a Comment
Browse Our Archives
Related posts from slacktivist