The Antichrist’s personal plane is making good time, as Rayford Steele enjoys the sleep of the just, “snoring, according to McCullum, for several hours.”

Well, if not the sleep of the just, the deep sleep of one who just doesn’t care that he just stood by and did nothing to prevent the slaughter of millions.

About an hour outside Baghdad, Leon Fortunato entered the cockpit and knelt next to Rayford. “We’re not entirely sure of security in New Babylon,” he said. “No one expects us to land in Baghdad. Let’s keep maintaining with the New Babylon tower that we’re on the way directly there. When we pick up our other three ambassadors, we may just stay on the ground for a few hours until the security forces have had a chance to clear New Babylon.”

“Will that affect your meetings?” Rayford said, trying to sound casual.

“I don’t see how it concerns you one way or the other. We can easily meet on the plane. …”

You get the idea. Just in case you don’t, Jerry Jenkins spells it out in excruciating repetitive detail in the following pages. It’s a semi-plausible way of arranging to have Nicolae Carpathia’s strategy meeting with his top lieutenants take place on the plane — and thus to allow Rayford, and readers, to eavesdrop.

This chapter, then, spends three pages contriving a situation in which Rayford can listen in on a meeting that eventually takes about 10 pages to unfold. That makes this one of Jenkins’ most efficient chapters — throughout most of this series of books it’s more like a 1-to-1 ratio of positioning to narrative, spending just as many pages maneuvering his characters into a position to observe what happens next as he does allowing them to observe it.

Buck Williams, for example, is headed to Israel to meet with Tsion Ben-Judah. That’s the next actual bit of story he’ll be involved in, but rather than just telling us the story parts of the story, Jenkins keeps us apprised of every phone call and airport stop along the way.

Buck checked in with Donny Moore, who said he had found some incredible deals on individual components and was putting together the five mega-laptops himself. “That’ll save you a little money,” he said. “Just a little over $20,000 a piece, I figure.”

Maybe Donny is a good and trustworthy guy and he’s putting together some really amazing computers. Or maybe he just couldn’t resist when he found a customer who was willing to pay $100,000 for five really “special” laptops.

I imagine those “key people” at the news organization were surprised to learn that Buck hadn’t been killed when World War III began a few days ago. This ongoing story is the biggest news since The Event itself, so when the boss never bothered to check in with his top editors and reporters, they had to assume he was either dead or trapped under something heavy.

Think of it: You’re the managing editor of a major news outlet. New York, London and Washington are all destroyed and you never hear from the boss. Chicago and Dallas and San Francisco are destroyed and the boss is still AWOL. And then, the following day, he calls — not to give orders or ask questions about how this huge story should be covered, and not to ask if everyone survived the series of nuclear attacks. No, he’s just calling to let you know he got a new cell phone, and to give you the number so you can call him if anything comes up.

Meanwhile, Rayford lands at the airport in Baghdad and Jenkins begins a laborious explanation of security ruses and arrangements for the meeting Nicolae will have with his lieutenants there on the airplane. This description is interspersed with a testy conversation between Rayford and Leon Fortunato. Fortunato tells Rayford they’ll be flying again in four hours.

“International aviation rules prohibit me from flying again for 24 hours.”

“Nonsense,” Fortunato said. “How do you feel?”

This goes on for another half-page or so, the two men posturing and asserting competing claims for dominance. Rayford makes a point of calling the man by his first name.

“I would appreciate it if you would refer to me as Mr. Fortunato.”

As they entered the terminal, Rayford said, “As I am the only one who can fly that plane, I would appreciate it if you would call me Captain Steele.”

Fortunato here seems like kind of a jerk, but then he’s supposed to be the chief assistant to the Antichrist — the No. 2 guy and the right-hand man of the all-time epitome of evil. Just being kind of a jerk doesn’t quite seem evil enough.

Like Nicolae himself, Fortunato seems like an unpleasant person to be around, but unpleasant doesn’t really cut it when you’re supposed to be superlatively wicked.

The portrayal of villains is another place where storytelling and theology inevitably intersect. What is evil? What is sin? What is wickedness? Is it the opposite of good, or the absence of good? Could it be an excess of good? Does it lie more in its ends or in its means? Your ideas about all of those questions will shape how you portray your uber-villains. 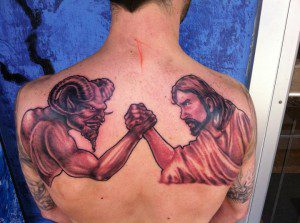 Think of the movie Serenity, Joss Whedon’s delightful big-screen curtain call for his abruptly cancelled scifi TV series Firefly. Serenity gives us “Reavers” — sub-human, bestial nightmares of pure savagery and violent carnage. From one theological or philosophical perspective, Reavers might seem to be strong candidates for the epitome of evil — soulless monsters bent on mindless destruction.

But Whedon has always been more interested in soulful monsters and mindful destruction. The Reavers are terrifying, but — SPOILER ALERT — they’re not the true villains of Serenity. The real villains are those who created the Reavers, and who did so with the best of intentions. And therein lies a whole other philosophy or theology and a very different set of answers to those questions about the nature of evil.

The Left Behind series ought to have richly meaningful villains. Just look at that title — “Antichrist” — and consider all the myriad ways Nicolae Carpathia’s villainy might have been used to explore the nature and meaning of Christ by portraying his antithesis.

But we never see anything in these books about the Antichrist as the antithesis of the Christ of the Gospels. That part is already taken in this series by Jesus himself, the Jesus of Tim LaHaye’s imagined second coming who will arrive at the “Glorious Appearing” to correct all of his earlier mistakes by embodying the opposite of everything he taught and lived in his first coming. The Antichrist cannot be shown to be the opposite of this Christ because the Antichrist is exactly like this Christ.

This also means that Fortunato — the Antichrist’s chief disciple — cannot be portrayed as the antithesis of what it means to be a disciple of Christ. Indeed, what we just saw in his conversation with such a disciple, Rayford Steele, is that Leon Fortunato is exactly like his Christian counterpart. He’s kind of a jerk in that conversation, but then so is Rayford. He’s arrogant and full of himself, but then so is Rayford.

The only difference between the two men is the same as the one thing that makes the Antichrist different from the vengeful Christ of LaHaye’s imagination: Fortunato is on the wrong side.

This seems to be the only thing the authors have to say about the nature of evil. It’s the wrong side. It’s the losing side.

So how, then, can we avoid evil? Easy — by always doing whatever we have to do to make sure our side wins.

January 18, 2013
Why should the Devil have all the good music -- and Taylor Swift and One Direction too?
Next Post

January 19, 2013 Agreeing on the problem (but not agreeing that it is a problem)
Recent Comments
397 Comments | Leave a Comment
Browse Our Archives
get the latest from
slacktivist
Sign up for our newsletter
POPULAR AT PATHEOS Progressive Christian
1