Agreeing on the problem (but not agreeing that it is a problem) January 19, 2013 Fred Clark

I’m digging through some rapidly aging bookmarks and came across two posts here on Patheos from consecutive days earlier this month.

The first post is from Peter Enns, who asks, “Can Evangelical Colleges and Seminaries Be Truly Academic Institutions?”

Here is the problem in a nutshell. Many evangelical colleges and seminaries in America were founded in no small part as centers for defending and propagating earlier traditional positions against forces that coalesced in the 19th century: European higher criticism, biblical archaeology, and Darwin (evolution). The questions that get at the heart of evangelical concerns are: when the Bible was written, by whom, and is it historically accurate? 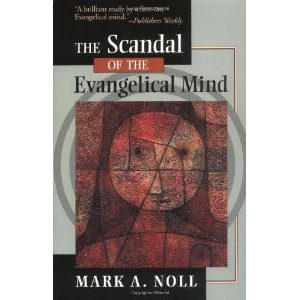 That defensive posture is quite evident in evangelical intuitions today (though not all, of course, and at times modified), but this raises a question for me: Can an institution claim to be fundamentally academic while at the same time centered on defending certain positions that are largely, if not wholly, out of sync with generations of academic discourse outside of evangelical boundaries?

It is common for evangelical institutions to have as part of their statements of faith clear articulations about biblical inerrancy and how that dogmatic starting point (either implicitly or [explicitly]) dictates interpretive conclusions. The question, simply put, is whether such a posture can be called “academic” by generally agreed upon standards – which are standards that evangelicals would quickly agree to in areas that do not touch evangelical dogma.

Another way of putting it is whether evangelical institutions can maintain a credible academic reputation when they officially promulgate positions that are only held within those institutions of similar ideology and not the academic discipline of biblical scholarship in general.

I was still trying to figure out whether it was a good thing or a bad thing that Enns was writing this while employed at my alma mater, when the very next day I came across this post on the “Thoughtlife” blog on Patheos’ evangelical channel, “Is Mark Noll Right? Is There No Evangelical Mind?“:

Schools like Union, Wheaton, Taylor, King’s College, Gordon, Messiah, Grove City, and my own institution, Boyce College, have ramped up their academic programs. I of course have concerns about an over-correction in this area among some institutions; some Christian colleges and universities are simply desperate for academic credibility, which poses a serious threat to ongoing scriptural fidelity. Ours is a serious intellectualism (the most serious, should be, given Matt 22:37), but it is a bounded one. We should advocate a confessional intellectualism (which, admittedly, many academics will distrust, and which may hamper the already difficult process of academic recognition).

So the good news is that there seems to be complete agreement on the nature of the problem Enns identifies.

And the bad news is there still seems to be disagreement that it’s actually a problem.

If you really believe that “unbounded” scholarship “poses a serious threat to ongoing scriptural fidelity,” then you have already conceded that you do not believe the scripture can withstand intellectual scrutiny. This “threat” only makes sense if you believe that the scriptures are a fraud, vulnerable to exposure.

With defenders like that, the Bible doesn’t need enemies.