The latter tends to make people uncomfortable because over-sharing the details of your sex life tends to be awkward.

I think that’s one reason that some people want to scream “TMI!” when they learn that someone is gay or see them holding hands with a member of the same sex. Their mind goes right to the sex, like being told where their straight friends conceived, and that’s not an image they want.

But when I tell you that I’m gay, I’m not making a statement about sex. I’m not telling you that I ever have had sex, or that I ever will.

But Moore doesn’t quite share Justin’s gentle temperament and unfailingly patient spirit. So he made this same point a bit more vividly. And he did so in an Asheville BBQ joint where he spied a prominent Southern Baptist pastor who had been “a driving force behind the anti-same-sex-marriage law passed in North Carolina last year.”

Moore figured this might be a good setting for a dramatic serving of “turn-about is fair play”:

Given the vile things said during the election about gay people and their ability to be good parents, and given the “protect our children” mantra used by such churches, I thought I’d try an experiment. 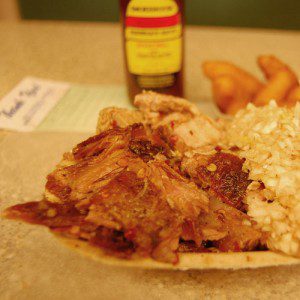 Without invitation or preamble, I slid into an empty seat at their table.

“Hi Pastor Bruce,” I said. “I was wondering. Do you and your wife honestly consider yourselves capable of being good parents? And how’re things in the bedroom between you two? What do you like to get up to in there?”

I wanted the pastor and his wife to understand, in real time, from a calm voice, and face-to-face, what it feels like when a stranger forces themselves and their values into their life and then judges them, their parenting skills, their bedroom antics, and their morality. I wanted them to know how it feels to have a stranger attack them on personal matters which are none of their business and about which they know nothing.

Things escalated a bit from there, but go read the whole story — it has a happy ending.

Alas, it’s not the sort of happy ending in which Pastor Bruce learns to feel empathy and his heart grew three sizes that day, but the next best thing, in which the pastor leaves and never comes back and everybody enjoys good BBQ without quite so much ambient bigotry spoiling the mood.

It takes some courage to be a Christian in Malaysia, where Christians make up less than 10 percent of the country.

And it takes some courage being an LGBT Christian in the church, where you’re likely to be condemned as sinful or even subhuman.

And I think it takes exponentially more courage to be a gay Christian in Malaysia.

Tony Jones reports from Good Samaritan in Kuala Lumpur, which he says is probably the only LGBT-friendly Christian church in all of Malaysia.

In Malaysia, a church has to register with the government, and it can only do so if it is a member of a larger body of churches, like a denomination or the national association of evangelical churches. [Pastor Joe Pang] has asked to be part of these groups, but Good Samaritan has been rejected. Therefore, the church exists illegally. They have, however, registered their ministry to HIV/AIDS patients as a non-profit, so that aspect of their existence is legal.

“Joe Pang is a piece of work,” Tony writes. And he means that in the very best way.

And for another voice of courage cubed, from another gay Christian Malaysian, check out “Queer Eye for God’s World,” by Joseph Goh.

The world is large and full of wonderful people.

February 1, 2013 Chick-fil-A Biblical Family of the Day
Recent Comments
83 Comments | Leave a Comment
"They always seem to get full-dress (touring) models. (I.e., with hard-case saddlebags and rear luggage ..."
P J Evans May 22 Flashback: The old paradigm
"Accepted by people who don't know geology and paleontology, maybe. There are some nice piles-o-rocks ..."
P J Evans Oops
"I'd have to pull the CRC handbook and look up half-lives. Not for the first ..."
P J Evans Oops
"I wonder if vampires get the teeth-falling-out dream."
Vermic Oops
Browse Our Archives
Related posts from slacktivist