James Dobson just not putting much effort into perfunctory lies

Here’s a disappointing recent statement from Focus on the Family founder James Dobson:

I have not had this confirmed, but a physician told me last week that Congress recently passed a law that has been signed by the president that would make it illegal to give people over 70 years of age stents for their heart. Which means you’re going to let them die. I don’t know for sure if that’s true, but that’s the kind of thing that is coming. In any competition between the young and the old, guess who is going to lose that? 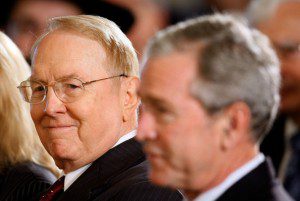 This is just stale leftovers from 2010, when this whole “death panels” business still seemed like a fresh and interesting lie.

Trotting that out now, three years later, just shows a lack of effort and originality on Dobson’s part. His massive radio audience deserves better. They’re tuning in to hear something new — new, creative lies for Jesus. They deserve to hear lies for Jesus told with a bit more flair than this hackneyed, going-through-the-motions.

Dobson has been a giant in Christian radio for decades, but now he seems to be taking his audience for granted. If you’re running a restaurant, would you think it was OK to serve 3-year-old bread? No? Then why is it OK to serve your audience 3-year-old lies, pretending that they’re just as good as something newly fabricated?

Dobson should take a cue from Kevin Swanson.

Swanson’s still only a second-tier player in the wild world of Christian radio (although I’m told he’s influential in the FIC/Quiverful sub-subculture) but he isn’t just sitting back on his heels, recycling old Sarah Palin nightmares in the hopes that his audience will accept that as good enough. Swanson is whipping up fantastical new lies for Jesus — lies for Jesus told with an artistry and panache that a younger James Dobson once displayed, many years ago.

Swanson seems to understand that perpetual outrage is like a shark — survival means constantly pushing forward.

Sure, Swanson’s dazzlingly weird claim is preposterous to anyone who knows the first thing about human biology, but Swanson knows that lying for Jesus isn’t about what you know, but about what you prefer.

His audience yawns. Yes, yes of course, we’ve known that for years. Tell us something we don’t know.

Pushing it forward, ever forward like a shark. That’s the only way to sustain the perpetual outrage the Christian radio audience wants.

February 14, 2013
Wrapping up the 'Biblical Family of the Day' series
Next Post