Polygamy is biblical, is it therefore moral?

The Chick-fil-A Biblical Family of the Day series highlighted how common polygamy is in the Bible.

This isn’t a handful of obscure cases, but dozens of examples, including some of the most prominent and exalted figures in the Bible. Our series here didn’t come close to listing every polygamist in the Bible, but just consider those we looked at: Abraham, Jacob, Esau, Simeon, Moses, Gideon, Elkanah, David, Solomon, Rehoboam, Caleb, Ashur, Shaharaim, Abijah, Joash.

That list leaves out plenty of others, including those reviled as wicked (like Ahab, Manasseh or Jehoiachin) and any of the foreigners who worshiped other gods. 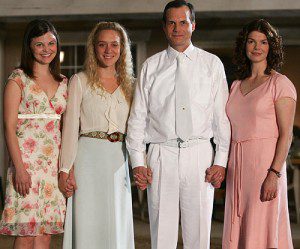 Note that for the characters listed above, polygamy is not presented as a flaw or a failing. On the contrary, it is almost always presented as evidence of prosperity and divine blessing for the righteous. Even the most extreme case, Solomon, is not criticized for the excess of marrying 700 wives, but only for including in that army of a household some of the wrong kinds of women — those foreigners with their foreign gods.

This is not an obscure feature in the Bible. It starts early, with Lamech, and continues throughout most of what we Christians call the Old Testament, shaping the stories of the most prominent characters — Abraham, Moses, David.

So OK then, how do we reconcile this praise and permission for polygamy with the white evangelical insistence that nothing the Bible praises can be immoral? Consider again the words of gatekeeper/witchfinder Owen Strachan:

There are “hard parts” of Scripture, to be sure. But the Bible is wholly inspired of God, without error, and therefore totally trustworthy (2 Tim. 3:16; 2 Peter 1:19-21; Numb. 23:19; Ps. 19:7). Whatever God does is right. All that God teaches us in Scripture is right. Christ and his apostles do not indicate at any point that the Old Testament is immoral, and in fact say the opposite. To say otherwise is to indicate that God is not absolutely right, and his word is not trustable.

Do the gatekeepers therefore believe that Christians today must embrace polygamy as a moral, acceptable and sacred form of “biblical family”?

That’s not a tough question for someone like me because I don’t approach the Bible the same way the gatekeepers pretend we must. My hermeneutic — the way I read and interpret the Bible –doesn’t insist that all of its rules and teachings are sacrosanct and authoritative for all of time. My hermeneutic says that the Christward trajectory of the Bible — the long arc bending toward justice and Jubilee — must guide us above and beyond any given single rule or clobber text. That’s why I’m not just able, but required to move past such clobber verses on a host of topics where the trajectory demands that we do so, such as the full equality of women inside and outside the church, the celebration of same-sex love and marriage, the abolition of slavery, and the potential goodness of investment, insurance, revolution, and peaceable pluralism, among other things.

That’s also why I find myself outside the gates of the evangelical tribe, banished there by the diktat of the gatekeepers who reject my hermeneutic and who condemn such talk of trajectories as an abandonment of biblical authority.

The Bible’s commendation and celebration of polygamy thus presents them with a thornier problem. (As does their embrace of investments and insurance, which they seem to get around by pretending the Bible has more to say about sex than it does about money. It doesn’t. Not even close.)

I haven’t heard the gatekeepers say much about polygamy except as part of a desperate slippery-slope argument against the legal recognition of same-sex marriage. Set aside the logical and factual flaws in that slippery-slope claim. What’s interesting here is that such an argument presumes that polygamy is self-evidently bad and immoral. That seems to contradict their insistence that everything in the Bible “is right.”

How do they make this leap — condemning a practice that the Bible teaches us God approved of for Abraham, Moses, David and Caleb?

I suspect they would begin by pointing out that those biblical figures lived a very, very long time ago. And that’s true, and pertinent, and an excellent point.

Just consider David. He’s a far more recent figure than Abraham or Moses or Caleb, but he still lived some 3,000 years ago. There are bits of Shakespeare that we find bewildering and indecipherable because his world, several centuries ago, is in some ways alien to our own. Chaucer even more so. The world of Beowulf even more. Augustine, Paul … keep going … Caesar, Alexander … keep going, further, centuries further. David was more distant to Alexander than Shakespeare is to us.

The world of 3,000 years ago is another world, a different world. David’s time and place and culture were, in numerous ways, radically different from our own.

I suspect the gatekeepers would also point out that polygamy becomes scarcer as we move forward in time through the stories of the Bible. By the time we get to the New Testament, monogamy has become the norm, if not the rule. The idea of wives as property that can be amassed and multiplied just like any other property, has by this point begun to recede into the background.

And now that we have two such points, we can draw a straight line between them — a line that travels from one point to the next. It’s a line, in other words, that has a direction. And we can follow that direction, that trajectory, beyond the second point to where it leads, to where those points point us.

“There is no such land,” the gatekeepers said. “The very idea of it is utterly inconceivable.”

And they did, in their voice of thunder, reiterate their command of silence, and threaten me with the direst penalties if I persisted.