If work is a responsibility, then work is also a right

If work is a responsibility, then work is also a right June 12, 2013 Fred Clark

We recently looked at Rep. Stephen Fincher, R-Tenn., and his biblically illiterate perversion of Mark 14:7, in which Jesus is quoted as saying, “For you always have the poor with you.”

Fincher misquoted that passage, twisting it into its opposite. And he did so because he was up to the very same thing that Judas was up to when he received that rebuke from Jesus — stealing from the treasury. Fincher, it turns out, has collected millions of dollars in agricultural subsidies, and to ensure that he keeps getting such generous handouts at the taxpayers’ expense, Fincher is trying to cut $21 billion from food aid for poor people so that the money can be used to boost farm subsidies for people such as, well, him.

In discussing all of that I neglected to mention that this passage from the Gospels wasn’t the only Bible verse Fincher wrenched out of context and twisted into an unrecognizable, ungodly mess.

Fincher did the same thing to 2 Thessalonians 3:10:

For even when we were with you, we gave you this command: Anyone unwilling to work should not eat.

Stephen Fincher seems to be confused about several things. He’s confused about how SNAP — the Supplemental Nutrition Assistance Program, or “food stamps” — actually works, who it helps, and why they need that help. And he’s terribly, terribly confused about the context and the meaning of this passage from the New Testament and how it has been understood by centuries of Christian teaching. 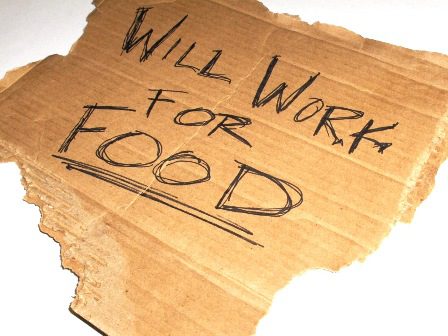 Fincher seemed to be invoking this Bible verse for the same nasty reason that other far-right Republicans — such as Rep. Michele Bachmann — have done so. That is, he seems to think it’s a condemnation of those lazy poors — the “takers” and parasites mooching off the Randian makers.

Fincher was arguing that food stamps are an illegitimate hand-out to the undeserving, lazy poor. That’s the only way to make sense of his equating SNAP beneficiaries with “anyone unwilling to work.”

That’s obscene. First of all, the gentleman from Tennessee seems completely ignorant about the undisputed facts of our ongoing employment crisis. As of April (the most recent figures available) there were 3.1 job-seekers for every job opening, yet Fincher can’t imagine any reason for anyone in America to be unemployed other than that they are “unwilling to work.”

And what about the children who make up 45 percent of all SNAP beneficiaries? Does Fincher really think these children ought to be forced to work by the threat of starvation? Or what about the 40 percent of SNAP beneficiaries who are employed? It’s obviously unfair to accuse those people of being “unwilling to work” because they’re working — working for far less than a livable wage, for less than half of what Fincher himself pocketed in agricultural subsidies last year.

If 2 Thessalonians 3:10 meant anything like what Fincher is pretending it means, then it still would not apply to the millions of Americans who depend on SNAP to feed their families.

But 2 Thessalonians 3:10 does not mean anything like what Fincher is pretending it means.

As Candace Chellew-Hodge notes, this epistle was written to a particular congregation in a particular time and place. Read the surrounding verses for a bit more context. “Paul” — or whoever wrote 2 Thessalonians — isn’t writing about idleness due to laziness, but due to apocalyptic fervor. “Because many of the members of this sect believed that Jesus’ return was imminent, they stopped working,” Chellew-Hodge writes. “They figured why work when Jesus would be back at any moment to sweep us all into heaven?”

Keep in mind that this was a first-century Christian community, still in the early “All who believed were together and had all things in common” phase of the young church. A bunch of commies, basically. So “Paul” is insisting that anyone who wants in on the “to each according to his needs”  aspect of the early church also has to keep up their end of the bargain as far as “from each according to his ability.”

Fincher isn’t citing this verse to mean what the author of 2 Thessalonians meant. Rep. Fincher’s point, rather, is to argue that “work is a duty and a matter of honor for every able-bodied citizen, in accordance with the principle: ‘He who does not work, neither shall he eat.'” That’s a paraphrase, not a direct quotation.

Well, actually it is a direct quotation, but not from Stephen Fincher. It’s a quotation from the 1936 Constitution of the Soviet Union.

The key point for both Fincher and for his fellow-travelers in Stalin’s USSR is that “work is a duty.”

It cannot be otherwise. Just as rights entail responsibilities, so too do responsibilities entail rights. It makes no sense to say that people have a duty to work unless they also have a right to work. John Paul II echoed more than a century of Catholic social teaching when he argued this in his papal encyclical Laborem Exercens:

We must first direct our attention to a fundamental issue: the question of finding work, or, in other words, the issue of suitable employment for all who are capable of it. The opposite of a just and right situation in this field is unemployment, that is to say the lack of work for those who are capable of it.

To believe that people have a duty to work, but no basic right to have work, leads to injustice and absurdity. So let me repeat here about Rep. Stephen Fincher what I wrote earlier about Rep. Bachmann when she misquoted 2 Thessalonians 3:10 back in 2011:

… If Fincher was arguing that every American capable of working has a responsibility to work without also arguing that every such person has the right to a job — a guaranteed right to a job, right now — then that would make him a monstrous, illogical imbecile intent on cruelly punishing the jobless with contradictory obligations and prohibitions. That would make him a horrible, ignorant, despicable failure of a human being.

So, obviously, that can’t be what he meant. Right?

June 12, 2013 Al Mohler: SBC is the perfect combination of Sterling Cooper and Dunder Mifflin
Recent Comments
159 Comments | Leave a Comment
Browse Our Archives
get the latest updates from
slacktivist
and the Patheos
Progressive Christian
Channel
POPULAR AT PATHEOS Progressive Christian
1