How frail a foundation, ye saints of the Lord

I’ve mentioned this quote from evangelical author and pastor Tim Keller twice recently (see here and here), but let me take another run at it here from another angle.

Keller was paraphrasing marriage equality advocate Jonathan Rauch in order to argue that condemnation of homosexuality as a sin is inextricably bound up with the lynchpins of evangelical faith. Here’s what he said:

To be clear, Keller isn’t saying that evangelicals’ “entire faith” is based on the belief that “homosexuality is a sin.” What he’s saying is that this belief arises from — and has thus become the pre-eminent shorthand exemplar of — a particular way of reading the Bible and of appealing to its “authority.” Since that approach to the Bible is at the center of what Keller says it means to be an evangelical Christian, it cannot bend without the whole thing breaking.

That’s backwards and upside-down. It makes your entire faith an edifice constructed on top of the foundation of one particular, peculiar, non-negotiable hermeneutic. Keller is rewriting the beloved old evangelical hymn:

How frail a foundation, ye saints of the Lord,
Is laid for your faith in your choice of a particular approach to authority and the way in which you read the Bible.

The original, for those unfamiliar with the song, goes like this:

How firm a foundation, ye saints of the Lord,
Is laid for your faith in His excellent word.

The remainder of the hymn shows that its composer, John Keith, agreed with the author of the Gospel of John — that Jesus is the “Word of God” upon which all our faith depends, not the Bible and certainly not the way in which we have chosen to read the Bible. 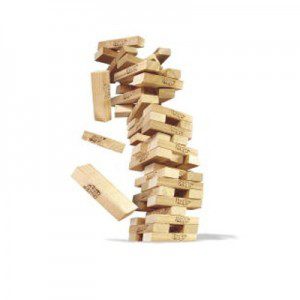 If Jesus is the basis for your faith — the object and the subject and the substance of your faith, then your “approach to authority” and “the way in which you read the Bible” can be completely disassembled without you having to “kick your entire faith out the door.”

In fact, if Jesus is the center of your faith, then you’re probably going to have to regularly and repeatedly “completely disassemble” your ideas about authority and the way in which you read the Bible. Your faith will require you to do that. Almost constantly.

And they will be. Probably more than once. Probably often. All those constructs you’ve carefully assembled — your approach to authority, the way in which you read the Bible — will at some point be dismantled before your eyes. If they were the foundation, and your faith was something built later on top of them, then it will fall with them.

But if faith was your starting point and your foundation, then the collapse of all those things assembled on top of it won’t affect it. You can sweep away the rubble of them and begin building anew with the foundation intact.

For most Christians, embracing a previously excluded group of marginalized people won’t require a radical tearing down and rebuilding of the hermeneutics we’ve constructed atop the foundation of our faith. For others — those who have somehow convinced themselves that such exclusion is an essential aspect of their religious identity — that disassembly and reconstruction may be as dramatic and traumatic as Keller suggests. But that doesn’t mean this disassembly isn’t necessary. Or that it isn’t inevitable.

July 17, 2013 6 years ago: Origins of the God Gap
Recent Comments
49 Comments | Leave a Comment
"A slightly different perspective from Fred's:The flavor of evangelicalism that thinks that witnessing T-shirts are ..."
Jenny Islander 8/13 Flashback: Sharing the Bad News
"Medically, a miscarriage is called a spontaneous abortion."
syfr 8/12 Flashback: Chillingworth
"Ya, you can run into such even apart from nuclear secrets. The guys who worked ..."
Cobalt Blue 8/11 Flashback: The Ephrata story
"Funny thing, it turned out Northern Corn was more important to the world economy than ..."
Hawker40 8/11 Flashback: The Ephrata story
Browse Our Archives
Related posts from slacktivist