On Syria and finding ways to make the world ‘less horrible’

I’ve only written two posts about the proposed U.S. military strikes against Syria: “Bombing Syria is not a last resort, so bombing Syria is neither just nor justifiable” and “It is happening again.”

I haven’t written more than that for much the same reason Ari Kohen discusses here:

The reason I haven’t written anything is because there hasn’t seemed to me to be anything useful to write. The situation is horrible, everyone surely knows it’s horrible, and there doesn’t seem to be anything we can do to make it less horrible. 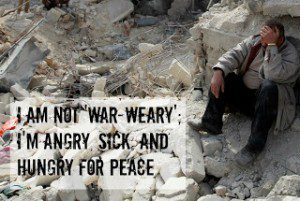 … If it seemed clear that U.S. intervention in Syria would lead to a good result for the people of Syria in the long term, I’d support it. … But — given the country’s history, demography, and geography; the make-up of the rebel forces; and the results of other recent U.S. interventions — that doesn’t seem to be the case at all.

And if it seemed clear that the people of Syria would be able to get a good result in the long term without any sort of intervention, then I’d feel better about arguing for the U.S. to stay out things. But — given the death toll of the past two years; the mass exodus of refugees; and the clear willingness of the government and the rebels to [flout] the most basic human rights norms — that doesn’t seem to be the case at all.

I disagree with Kohen somewhat because of a distinction he makes in that second paragraph and then blurs in the fourth. He first writes of “demanding the U.S. do nothing that involves the military,” but then fudges that up, unhelpfully, by equating that with “any sort of intervention” (my italics).

And that, right there, is our problem. The U.S. has become so locked into the idea that “any sort of intervention” must, by definition, “involve the military” that America has become almost unable to act otherwise — or to imagine any way that anyone could act otherwise. And so we end up with this horrible situation in which we think of the only possibilities being either to do nothing while people are being slaughtered, or else to slaughter people in response to people being slaughtered. We’ve become so accustomed to turning to the last resort of military intervention that it has become our first resort and our only resort — the only thing we know how to do and the only thing we can imagine doing or not doing.

That’s why I invoked Gene Sharp earlier. For decades, Sharp has collected and chronicled examples of effective nonviolent action from all over the world. His research — his history — shows that these approaches have been more consistently effective and efficacious than the use of violence.

Mention someone like Sharp and you’ll often encounter a hostile reaction dismissing him (and you, for mentioning him) as a feckless, irrelevant hippie. This is often expressed in a mocking tone, “So, what? You want us to go over there with daisies singing ‘Kumbaya’?” That mocking caricature confirms the problem: A lack of imagination that has ossified into a determined ignorance — an ignorance that clings tightly to remaining ignorant. It confirms that we are unable to find other solutions and other approaches because we have given up looking for them.

The next step in dismissing any effort to broaden our imagining is a transparent bit of dishonesty. Advocates of military intervention as a first-and-only resort will demand that anyone arguing otherwise must, at this instant, produce an alternative plan that would guarantee a successful outcome of perfect peace and justice. This comprehensive alternative plan, it is demanded, must pass a test that the default call for military intervention has already failed. They cannot provide a magic-bullet solution, but they demand others produce a magic non-bullet solution. Defenders of the military default are thus betting in bad faith: You must pay up if you lose, but they owe nothing when they lose. Such bad faith bets are another clear sign that those demanding them have run out of ideas and arguments.

I don’t have a magic non-bullet solution for the horrible situation in Syria, but I’m far from convinced that more bullets will make that situation any less horrible.

I don’t accept that bombing and “doing nothing”  are the only possible options when confronted with such horrible situations. Surely “any sort of intervention” can be more creative — and more effective — than only interventions that involve bombs and bullets and death.