Over at Friendly Atheist, Terry Firma shares a purportedly “evangelistic” video featuring a short skit with a Righteous Christian and an Arrogant Atheist Fool stock character, who in this case is also a dentist:

The video was produced by something called CVCNow, which seems to be a church or parachurch group of Australian evangelical Christians. The group’s website is full of similar videos, and its “about” page consists of one sentence: “All we want is to help you explore those unavoidable questions about life, the universe and everything in it.”

“Let us help you discover life with Jesus,” their website also says, but again that’s not what that video is about.

Terry Firma takes the videomakers’ claims at face value and responds with a series of excellent questions. I doubt the folks at CVCNow would be happy to see those questions, or to respond to them, even though they’re a splendid example of someone who was spurred by their video to “explore those unavoidable questions about life, the universe and everything in it.”

That video isn’t really about exploring questions. It’s about dictating answers. Or, rather, it’s about drawing lines between insiders who embrace one set of answers and outsiders who don’t.

It’s tribalism, not evangelism. It’s not about helping others “discover life with Jesus.” It’s an exercise in reinforcing tribal identity and tribal solidarity, which can only be defined in opposition to the Other.

Terry saved me some play-and-pause typing by transcribing the video (thanks!), which I’ll copy here:

Dentist: OK, we’re done.
Patient: Yes. Thank God for that.
Dentist (incredulous): God?
Patient: What do you mean?
Dentist: Who in this day and age still believes in God?
Patient: Well, I do. Why’s that?
Dentist: Well, you obviously missed all the wars, the devastation, the poverty, everything that goes wrong with this world.
Patient: Well, I don’t believe in dentists. If there are dentists in the world, why do so many people have broken, infected, and missing teeth?
Dentist: I can’t help people that don’t come to me to have their teeth fixed.
Patient: Exactly! Same way with God. It’s a bit rich for us to expect God to help people who won’t come to Him and instead insist on doing things their own way.
Dentist (wavering): And how am I meant to come to God?
Patient: Just — talk to him. He’s listening.

Not present in the frame of this video is the most important character in this story — the other Righteous Christian standing to the side, cheering for his team in this competition between tribes.

“Oooh, burn!” he yells after that “I don’t believe in dentists” line settles the problem of suffering and evil for all of time. And then after the Righteous Christian Patient delivers the graceless coup de grâce — “Exactly!” — he starts chanting Jee-zuss! Jee-zuss! Jee-zuss! and looking for someone to high-five.

That’s not evangelism. Evangelism is hospitality, and hospitality is always about the guest, not about me. This video is all about me — all about us, our tribe, our team.

Trash-talking the other “tribe” is not a demonstration of hospitality. Pretty much the opposite, actually.

The message for people like the dentist — everyone else — is only this: We’re not listening to you.

Listening is every bit as essential to evangelism as it is to acting.

And that, again, is why the acting is always terrible in supposedly evangelistic videos like this one. That’s what the script requires. The script doesn’t allow listening.

The roles in these supposedly evangelistic skits are not written as human characters interacting in human ways and saying things that actual humans would say. They are written as cardboard representations of tribal stereotypes. Such stereotypes are incapable of seeming like flesh-and-blood human characters — incapable of “exploring those unavoidable questions” about our humanity.

You can’t imagine this little skit being performed by good actors because, in order to be good actors, they’d have to change the script.

It’d be fun, for instance, to recast this little sketch with Woody Harrelson as patient Martin Hart and Matthew McConaughey as Dr. Rust Cohle:

Cohle (incredulous): God?
Hart: You’re not a Christian, so what do you believe? 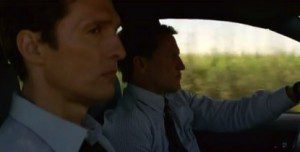 Cohle: I believe that people shouldn’t talk about this kind of shit at work.
Hart: Hold on, hold on. Give me a courtesy, all right? I’m not trying to convert you.
Cohle: I consider myself a realist, all right? But in philosophical terms, I’m what’s called a pessimist.
Hart: Um, OK, what’s that mean?
Cohle: Means I’m bad at parties.
Hart: Let me tell you, you ain’t great outside of parties either.
Cohle: I think human consciousness is a tragic misstep in human evolution. We became too self aware; nature created an aspect of nature separate from itself. We are creatures that should not exist by natural law. We are things that labor under the illusion of having a self, this accretion of sensory experience and feeling, programmed with total assurance that we are each somebody, when in fact everybody’s nobody. I think the honorable thing for our species to do is deny our programming, stop reproducing, walk hand in hand into extinction, one last midnight, brothers and sisters opting out of a raw deal.
Hart: I wouldn’t go around spoutin’ that shit if I was you. People around here don’t think that way. I don’t think that way.
Cohle: Well, anyway, your tooth looks better. Check with Carol on your way out about scheduling a follow-up in a few weeks.