Sex abuse in the church: Demonizing the demonic at Charisma magazine

Ahab at Republic of Gilead alerts us that Charisma news editor Jennifer LeClaire has addressed the matter of sexual abuse in the church.

I’ve written about LeClaire before, noting that she is one of Charisma’s “most vicious hatchet-wielders” in the culture wars and that she has a penchant for pushing some rather far-fetched theories, such as that homosexuality is caused by demonic rape by succubi and incubi, of that David Barton is right and Charisma-approved prayer should be mandatory in public schools. 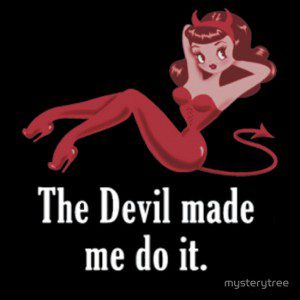 But let’s try to be as generous as possible and continue to give LeClaire the benefit of the doubt despite all that she’s done to reject that generosity. Let’s first commend all that we can in LeClaire’s latest article.

LeClaire’s column is titled “Sexual Abuse in the Church Needs to Stop!” I agree! I agree so emphatically, in fact, that I won’t even quibble about the non-ironic use of an exclamation point in a headline.

But again, let’s let that slide. In this case, it actually seems appropriate that she should be grieved and/or offended. The subject is, objectively, grievous and offensive.

LeClaire offers a disheartening round-up of recent cases, after which, we read this odd paragraph:

The reports just go on and on — and on. It’s sickening. Evangelicals put so much effort into battling issues like gay marriage and abortion, which is all well and good, but where is the crusade against sexual abuse in the church? The secular media is reporting these instances, but it seems unless it’s a megachurch pastor or a celebrity preacher involved, cases of kids being molested in Protestant churches continue arising without much attention.

If only there were someone she could talk to about this lack of attention from the evangelical press. Perhaps someone like the news editor of an evangelical magazine with a circulation more than twice that of Christianity Today?

Let’s note here, though, that it’s a positive step of sorts that LeClaire’s reflexive demonizing is, at last, being directed here toward something genuinely evil that can appropriately be regarded as demonic. She says it’s “all well and good” that her tribe of Christians is obsessed with demonizing people who want to get married or women seeking medical help, even though this is neither well nor good. Demonizing LGBT people and women who have abortions is, in fact, a pernicious rot at the heart of white evangelicalism — a toxic, self-righteous cancer pervading and distorting every facet of evangelicalism so dramatically that it has almost become incapable of love. This demonizing of Satanic baby-killers is a grave sin masquerading under the harmless-sounding euphemism of “pro-life,” and until evangelicals repent of that sin — repent of the sin of “the pro-life movement” — it’s unlikely they’ll be able to do anything other than demonize, anything other than think of themselves as “crusaders.”

But still, if the best we can hope to be is crusaders blazing a righteous trail of destruction with fire and sword against the demonic other, then I suppose it’s an improvement of sorts if the demonic other we’re targeting is a predatory abuser rather than a woman with no good options or a nice couple who’s just looking to hire a photographer for their wedding.

LeClaire sort of commends victims for coming forward and preventing churches and religious institutions from “sweeping these dirty little secrets under the rug.” Sexual abuse is a crisis, LeClaire says, and it’s something the church must confront and contend with.

So far, so good. And I admire LeClaire’s concern that this be more than just an ad hoc, case-by-case response. When a problem is this acute and this widespread, then we need to address its root causes — to dig deep and root out those root causes. That’s good.

In my book The Spiritual Warrior’s Guide to Defeating Jezebel, I point to one root of this sort of immorality. In charismatic circles, we call it the spirit of Jezebel, which is essentially a spirit of seduction that woos people into immorality and idolatry. (See Revelation 2:20.) Sexual predators carrying the Christian banner have been seduced and deceived by this spirit, which has somehow justified sexual abuse in their darkened minds. The spirit of Jezebel has formed a stronghold over our nation.

If you’re not familiar with the theological perspective of Charisma magazine and it’s Perettified notions of spiritual warfare, you might think this is just a vivid metaphor. Taken that way, after all, that paragraph makes sense. As a description of churches and religious institutions just beginning to grapple with the horror of widespread sexual abuse, the metaphor of a predatory, deceptive demonic spirit kind of works.

But LeClaire does not mean this as a metaphor. Her talk about the “Jezebel spirit” is meant literally. This is not a symbol for the patriarchal entitlement that views the bodies of women and children as property for men to own and exploit as they see fit. It is not a symbol for some deeper social or theological analysis — it is the entire substance of LeClaire’s and Charisma’s analysis.

And that, as Ahab wrote, is harmful, destructive nonsense:

This kind of superstitious thinking reduces a serious, complex problem to the mischief of an invisible boogeyman. To end sexual abuse in churches, congregations must tackle authoritarian power structures, patriarchy, lack of oversight, and barriers to institutional accountability, not imaginary spirits.

Furthermore, the Charisma article absolves perpetrators of their actions. When perpetrators commit abusive acts, they make a calculated, deliberate choice to abuse, and thus are morally culpable for their actions. By blaming clergy abuse on the Jezebel demon, LeClaire deflects culpability away from abusers onto an imaginary demon.