Monday was a big day science-wise.

Phil Plait takes a shot at summarizing the big news in one sentence: “Astronomers have announced that they have seen, for the first time, direct evidence of ‘inflation’ in the extremely early Universe, unlocking an entire chapter in the history of the cosmos.”

Plait is good at writing about science for a non-scientist audience, so he realizes right away that that’s not really very clear for those of us who aren’t already up-to-speed on this stuff. Like, OK, I’m familiar in a layperson’s way with what “inflation” means in terms of the Big Bang. But I wouldn’t have a clue about what kind of evidence we could look for to confirm it actually happened.

Plait acknowledges that it isn’t easy to describe what these folks found, or how they found it, or why it’s such a big deal:

This news is very important and very interesting. However, it’s also very esoteric — probably the most layered and complex announcement I’ve ever written about. It’s not like the Higgs boson, which could at least be summed up in a sentence or two. But this new work unveils a critical point in the history of the Universe and has profound implications for physics.

In anticipation of this announcement, The Guardian’s Stuart Clark wrote a pretty clear, fairly accessible summary of what these scientists found and what it means. Sean Carroll also gave his best shot at summarizing all of that:

Cosmic inflation is actually a pretty simple idea. Very early on – we’re not sure exactly when, but plausibly 10-^35 seconds or less after the Planck time – the universe went through a phase of accelerated expansion for some reason or another. There are many models for what could have caused such a phase; sorting them out is exactly what we’re trying to do here. The basic effect of this inflationary era is to smooth things out: stuff like density perturbations, spatial curvature, and unwanted relics just get diluted away. Then at some point – again, we aren’t sure when or why – this period ends, and the energy that was driving the accelerated expansion converts into ordinary matter and radiation, and the conventional Hot Big Bang story begins.

Except that quantum mechanics says that we can’t completely smooth things out. The Heisenberg uncertainty principle tells us that there will always be an irreducible minimum amount of jiggle in any quantum system, even when it’s in its lowest-energy (“vacuum”) state. In the context of inflation, that means that quantum fields that are relatively light (low mass) will exhibit fluctuations. (Gauge fields like photons are an exception, due to symmetries that we don’t need to go into right now.)

I’m grateful that we don’t need to go into that now, but I’m afraid that Carroll still lost me way before he got to gauge fields.

The main thing I take away from Carroll’s post is this: “Other than finding life on other planets or directly detecting dark matter, I can’t think of any other plausible near-term astrophysical discovery more important than this one for improving our understanding of the universe.”

Couple that with the wowza language used by the scientists in Clark’s piece — “the Holy Grail of cosmology” — and even those of us who are, like me, going “primordial what now?” can appreciate that this is a big honking deal.

I think my favorite demonstration of that, though, is this video Jessica Bluemke posted at Friendly Atheist. It’s from Stanford University, and it shows physicist Chao-Lin Kuo announcing the discovery to physicist Andrei Linde, who is learning for the first time that his theory has been confirmed by solid evidence:

So, OK then, I want to understand this. It seems to me there are three aspects I need a good grasp of: 1) The theory being confirmed; 2) The evidence and how it confirms the theory; and 3) The implications of all of that.

If you’ve got a good understanding of any one of those three, then I’d invite you to take a crack at summarizing it for the rest of us in comments below.

“Talk to me like I’m stupid,” Ta-Nehisi Coates says when he asks his readers about things he doesn’t understand. Let me borrow that here. Explain this stuff the way you would to someone who can’t be assumed to know any of the lingo or the basic ideas involved. Explain it the way you would if you were asked to do so between innings for the fans at a ball game. Or explain it they way you would to a room full of clever junior high students. 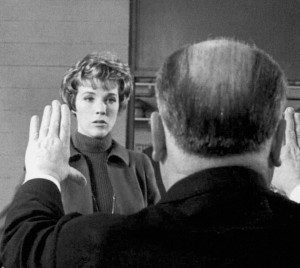 Or — if that all sounds too boring — try this: You’re the scientist on the side of the good-guys in a Hitchcockian thriller. Through a complicated sequence of events, the fate of the free world has come to rest on the shoulders of an innocent woman who must sneak into the villains’ lair to retrieve the MacGuffin by posing as a brilliant physicist. She’ a small-town high school English teacher who’s still reeling from unwittingly becoming embroiled in an international scheme. She’s sharp and resourceful, but she’s not a scientist, and if the villains discover she’s not really a physicist, she will surely be killed (which wouldn’t just be calamitous for the free world, but for you personally, since you fell madly in love with her the moment you met in the dining car of that train back in Act 1).

You have five minutes to explain Monday’s big announcement to her well enough to enable her to at least bluff her way in and out of the crowd of evil physicists. What do you say?

March 17, 2014
Sex abuse in the church: Demonizing the demonic at Charisma magazine
Next Post

March 18, 2014 White evangelicals getting ready to rewrite the Bible. Again.
Recent Comments
0 | Leave a Comment
"There's a scene in the book where they stone some gay men to death, iirc. ..."
Ross What’s your story?
"The question is whether the Book of Mormon is more of a Halloween H20 kind ..."
Ross What’s your story?
"We've had raccoons and ducks, so ..."
ohiolibrarian There will be no highlights on ..."
"This would be even better if they have Randolph Carter be a member for a ..."
SororAyin What’s your story?
Browse Our Archives
get the latest updates from
slacktivist
and the Patheos
Progressive Christian
Channel
POPULAR AT PATHEOS Progressive Christian
1