This is the Sunday school pageant I’d love to see: Psalm 82

The key to any children’s theater production — whether community theater or school assembly or Sunday school pageant — is to pick a story with a really big cast. You need to get everybody on stage and involved. This is one reason why you never see children’s theaters putting on, say, Waiting for Godot or The Zoo Story.

This is also why Sunday school Christmas pageants may deviate a bit from the Nativity stories in the Gospels. Yes, fine, the magi and the shepherds shouldn’t actually be in the same scene, but if we don’t put the Three Wisemen right there at the manger in Bethlehem, then there’s three kids who won’t have a part in the pageant. (You can always add more angels to the heavenly host, of course, although white sheets aren’t as universal as they used to be and so costumes may be harder to come by.)

This is another reason the story of Noah’s Ark is a popular choice for Sunday school pageants. In the wake of Darren Aronofsky’s movie, many people have again noted how strange it is that this R-rated, NSFW story of massive, worldwide death and destruction remains a perennial favorite Bible story for us to tell to small children. But those kids look adorable in their animal costumes, walking two-by-two across the stage.

With this criteria in mind, I’d like to commend another Bible story as a terrific candidate for future Sunday school pageants. The passage we looked at this morning in today’s “Sunday favorites,” Psalm 82, offers the possibility of a massive chorus, with potential speaking roles for every child who wants one.

Psalm 82 is a dazzlingly weird passage. It’s a lot more like something out of Neil Gaiman than most of the Psalms. The scene is a “divine council” in which God meets with all the other Gods and informs them that they’re all in danger of losing their jobs and dying like mere mortals if they don’t get their act together and defend justice for the weak and needy.

Wait … what? Yes, this is really a scene from your Bible:

God has taken his place in the divine council;
in the midst of the gods he holds judgement:
“How long will you judge unjustly
and show partiality to the wicked?”
Selah
“Give justice to the weak and the orphan;
maintain the right of the lowly and the destitute.
Rescue the weak and the needy;
deliver them from the hand of the wicked.”

They have neither knowledge nor understanding,
they walk around in darkness;
all the foundations of the earth are shaken.

I say, “You are gods,
children of the Most High, all of you;
nevertheless, you shall die like mortals,
and fall like any prince.”

This divine council is like Jesus’ parable of the Sheep and the Goats, except for deities rather than for humans. It’s like Jehovah has been reading The Odyssey and American Gods and is unimpressed with the conduct of these colleagues.

If we stick to this script strictly as written, it offers only one speaking role. That won’t do. A Sunday school pageant with only one speaking role is bound to create all sorts of fights and resentments, and those would only be amplified by the fact that, in this case, that lone speaking role is the part of Jehovah. I think it’d be best, actually, to leave that role uncast — just having the voice of Jehovah pre-recorded and played over the loudspeakers. (That would also solve the otherwise insurmountable problem of costuming Jehovah, which introduces innumerable potential Trinitarian heresies if you make God look too much or not enough like Jesus. We’d also want to avoid making God appear too much like Moses, the way Michelangelo did with the bearded God on the ceiling of the Sistine Chapel.)

So where do all the other speaking roles come from? The children could all be cast as members of the divine council, each proceeding onto the stage and introducing themselves before they take their place in the assembly. It would be — like the procession of animals in any Noah’s Ark pageant — adorable:

“I am Thor, son of Odin, and god of thunder.” (Surely some child already has a Thor costume.) 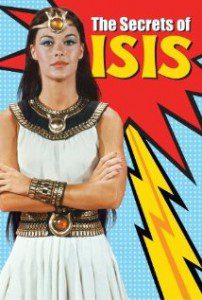 “I am Isis, mother goddess of Egypt.” (Some aging Gen-Xer in the congregation may also have an Isis costume in the attic from when she was a kid.)

“I am Quetzlcoatl, the feathered serpent of the Americas.” (Will a second-grader be able to pronounce “Quetzlcoatl”? Probably not. Will this mispronunciation be almost unbearably cute? Absolutely. Parents love that stuff.)

“I am Obàtálá, who formed humans from the dust of the Earth.” (Note: Don’t ethnically typecast the kids in these roles. That’s not cool. Plus, it violates a big theme of Psalm 82, which is that divinity transcends nationality.)

“I am Dagon, fish-God of the Amorites.”

This will be lots of fun and educational for the children, each of whom will get to research their God or Goddess and to help write the brief speech introducing each one to the audience. I appreciate that this might potentially raise some questions with parents — “Why is my daughter reading Bullfinch for Sunday school?” But while some parishioners may be upset or confused by a pageant that asks children to learn the names from these ancient pantheons, that won’t be nearly as upsetting or confusing to them as what Jehovah has to say to this divine council.

God doesn’t tell them they don’t exist. God doesn’t dismiss them as false gods, or idols. God simply reminds them to do their job.

The final verse of Psalm 82 shifts from this monolatrous conceit as it switches from the voice of God to the voice of the Psalmist, who eases us out of the strangeness of this “divine council” talk and reaffirms our more familiar monotheism: “Rise up, O God, judge the earth; for all the nations belong to you!”

But note the basis for this claim. This one God is said to be the one true God above all others not because this God is the most powerful, or the one true creator, or because this God is our God and not some foreign God. This God’s claim to superiority and sovereignty rests on justice for the weak and the orphan and defending the rights of “the lowly and the destitute.”

That’s why God is God. That is the necessary and sufficient basis for this God’s “place” at the top of this “divine council.”

I’m not sure how my Sunday school pageant rendition of Psalm 82 should end.

In the Psalm itself, these other members of the divine council don’t seem to heed this charge to champion justice for the week and the needy, and that, Psalm 82 suggests, is why those gods were doomed to diminish and to “die like mortals.” I like the lesson there, but while such an aspirational moral to the story is commendably hortatory, I also don’t want the children to learn bad history. A more accurate historical ending wouldn’t work either, though. We can’t very well have the kid playing Zeus conclude the pageant by saying, “I, Zeus, was too busy impregnating mortals to champion the rights of the lowly and the destitute, and so I eventually fell like any prince when Constantine used the power of the sword to establish imperial hegemony for the Christian God.”

So the ending needs work. Maybe we could workshop this thing and try to improv something in rehearsal.

May 13, 2014 Rejoice with those who rejoice: Big day in Little Rock
Recent Comments
0 | Leave a Comment
Browse Our Archives
get the latest from
slacktivist
Sign up for our newsletter
POPULAR AT PATHEOS Progressive Christian
1