Rejoice with those who rejoice: Big day in Little Rock

Rejoice with those who rejoice: Big day in Little Rock May 13, 2014 Fred Clark

On Friday, Pulaski County, Ark., circuit court judge Chris Piazza ruled that the state’s ban on same-sex marriages was unconstitutional. So Monday was a joyous day in Arkansas, with more weddings than the end of As You Like It.

Monday also turned out to be a busy day for the Rev. Wendell Griffen of New Millennium Baptist Church, who is also a judge in Little Rock. Griffen (pictured below) spent much of Monday officiating wedding ceremonies in both capacities.

That photo below is from the Arkansas Times’ Arkansas Blog, which includes Griffen’s comments on the happy day at Little Rock’s Pulaski County Courthouse: 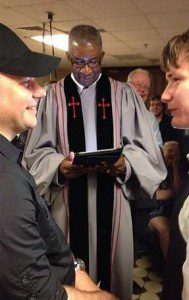 I was asked to be an officiant by people who I’ve known and been involved with issues of equality for years. I was glad to say yes. I married a couple named Thomas and Williams. It was a blessing — just like every marriage ceremony I’ve done. Excitement, anxiety, I don’t care how many times they prepare for it, they trip over the lines. Wonderful.

It was the same, but it was different in a much bigger kind of way. This is historic. These are people who have loved each other and been committed to each other for years. I’ve got a ceremony I’m doing for a couple that’s been together longer than I’ve been married to my wife — 43 years. But they have never been able to live openly as married people. This is historic because now they are open. They are married. They’re not just together, they’re married.

Equality is always an arc and the arc of justice always bends toward equality.

I’m not 100-percent certain, but I think one half of that couple Griffen is talking about can be seen in that photo. I’m pretty sure that’s Catholic theologian William Lindsey photo-bombing over his friend the Baptist minister’s left shoulder and grinning ear to ear.

Lindsey, who seems like an old friend because I’ve been reading his wonderful Bilgrimage blog for years, was also at the Pulaski County Courthouse on Monday, along with Steve, his beloved partner of 43 years.

This is a beautiful thing and one of the happiest bits of news I’ve ever had the privilege of relaying here: “Sealed, Signed, Delivered, and Oh Happy Day: Steve and I Married Today in Little Rock.”

Lindsey writes more about the ceremony — performed by Griffen — in a follow-up post in which he includes many other lovely details and anecdotes from this wild, wonderful day in Little Rock:

As we wait for the license, we stand next to an elderly lady sitting in a chair. She tells us “her girls” will marry today, her daughter and daughter’s partner, and she’s ecstatic. Their son, who has just finished high school and is with his grandmother while she waits, is happy beyond belief. “When we get home, I’m going to make all of us a banana pudding cake to celebrate.”

And: “You know, I go to church with my girls and grandson, but we’ve found only one church that will accept us, and it’s in Little Rock [these folks live in Hot Springs]. But no one can tell me I can’t pray to God anytime and anywhere I want, can they?”

And: “When I found out I had cancer, it had almost reached my brain stem. I lost sight in one eye and, well, you can see that they had to take this part of my face. And do you know which of my four children offered to take care of me? Not the three who are straight and married. No. It was the one that the churches won’t accept, with her partner. They took me in and take care of me.”

For more pictures from this happy day, see Gray Weldon’s photos at The New Civil Rights Movement. (Scroll down to the fourth pic for another photo-bomb from William Lindsey.)