A good joke can change the world

I have always believed that a good joke can change the world.

Now we have proof that it’s true: “Office Space helped rid the world of ‘flair.'”

“About four years after Office Space came out, T.G.I. Fridays got rid of all that [button] flair, because people would come in and make cracks about it,” [Mike] Judge recently told Deadline. “One of my ADs asked once at the restaurant why their flair was missing and they said they removed it because of that movie Office Space. So, maybe I made the world a better place.” Indeed, now a chastened, more mature T.G.I Fridays no longer forces its waiters to talk about their flair, instead allowing them — and their grateful patrons — a side order of dignity to go with their bacon mac ‘n’ cheese bites.

Granted, in the grand scheme of things, the fact that waitstaff at chain restaurants were required to don “flair” in an aggressive display of mandatory cheer and (literally) uniform individuality was not one of the gravest injustices besetting humanity.

Still, though, the end of such demeaning work requirements does, as Judge says, help make “the world a better place.” Thousands of people stuck in lousy dead-end jobs now have slightly less-lousy dead-end jobs. 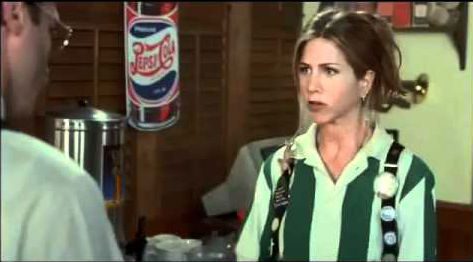 But let’s not get lost in the particulars of this case, what’s important here is the confirmation of the general principle: A good joke really can change the world.

We have other examples that this is true but we don’t always notice them because the effect of good jokes usually tends to be defensive. The craftspeople at some of our finest joke workshops (the guilds of Stewart, Colbert, Onion, Toast, Silverman, etc.) expend a lot of energy playing a kind of whack-a-mole game in which prophylactic jokes prevent the world from getting worse. That’s a harder thing to identify or measure, but the effect is real.

Consider, for example, that in 2009, the possibility of President Sarah Palin did not seem wholly preposterous the way it does today. That was the work of thousands of jokes — some perfectly crafted, some kind of sloppy and off-target. The cumulative effect of all those jokes helped to make the world a better place — or to prevent it from getting worse in one particular way, which amounts to something like the same thing.

The relatively modest achievement of Judge’s Office Space joke is a reminder that this isn’t easy. Judge crafted a precise and devastating joke and then was able to deliver that joke through an expensive, high-profile platform. Alas, most of us do not have access to such platforms, and we can’t hire someone as skilled and popular as Jennifer Aniston to ensure that our jokes are so perfectly delivered.

But pay attention to Judge’s description of the process that unfolded over time. It took several years from the release of Office Space before the last buttons were removed and partial dignity was restored to these workers. And it wasn’t solely because of Judge and Aniston — it was due to thousands of people all over the country repeating and embellishing and riffing on the original joke.

It takes a village. The good news is that we now have powerful new technology  and new tools for disseminating the best jokes — Twitter and other social media. Our best jokes can now be spread, amplified, applied and reapplied with great cumulative power.

Even so, could even the best jokes ever manage to eliminate something more serious than the indignity of “flair”? Could even a perfect joke ever hope to make a difference when it comes to serious, pervasive, enduring structural injustices like patriarchy, plutocracy or racism?

We’ll never know unless we try.

Here’s John Oliver, doing his part, attacking the obscene injustice of American mass incarceration with what might really be one of the most potentially powerful weapons we have — a bunch of good jokes:

July 23, 2014
Idiot plots, purity culture, and the cruel gods of farce
Next Post

July 24, 2014 We're having some work done
Recent Comments
0 | Leave a Comment
"He still has court dates coming up about the speeding-on-suspended-license and gun-at-airport charges"
яовэят ёскэят 😘 May 18 Flashback: Superstition ain’t the ..."
"The Ukrainian word for "iron chariot" is "tractor"."
Hawker40 May 17 Flashback: Preacher teacher
"I had hopes that Franklin would follow Billy into the evangelism wing, something that is ..."
Guthrum May 17 Flashback: Preacher teacher
""But he's my cousin!" didn't dispel the dead-girl-or-live-boy effect as much as he might have ..."
butting May 18 Flashback: Superstition ain’t the ..."
Browse Our Archives
Related posts from slacktivist