It’s your turn to walk on water

• The one thing that unites every blogger here at Patheos — Christian, atheist, Pagan, Buddhist, mixed-drink martial artist — is our shared frustration with autoplay video ads. That frustration is shared, too, by our hosts here, because their contracts with advertisers make it clear that such ads aren’t supposed to be allowed here.

Anyway, the IT crowd is working on technical fixes to put a stake through the heart of this evil. And also to figure out the app-store glitch that’s hijacking pages when we try to read them on an iPhone. (Hemant has a good summary of some steps you can take if you want to assist Patheos’ tech crew in this righteous battle.)

Soon, I hope, Patheos will be autoplay-video free, after which all the bloggers of the various faith traditions can argue about which of our prayers were responsible for that result (with the atheist bloggers arguing, of course, that it was secular code — not supernatural intervention — that solved the problem). That will be a happy day.

• The Puppy Spring: “What started quite literally as a walk in a park with a dog has exploded into grave sin writ large, moral crisis, or subversive coup attempt depending upon who you ask.”

• Back-to-back in my Feedly reader yesterday: “Pat Robertson: Gay People Are Terrorists,” followed by a post about these “terrorists” in Wyoming: 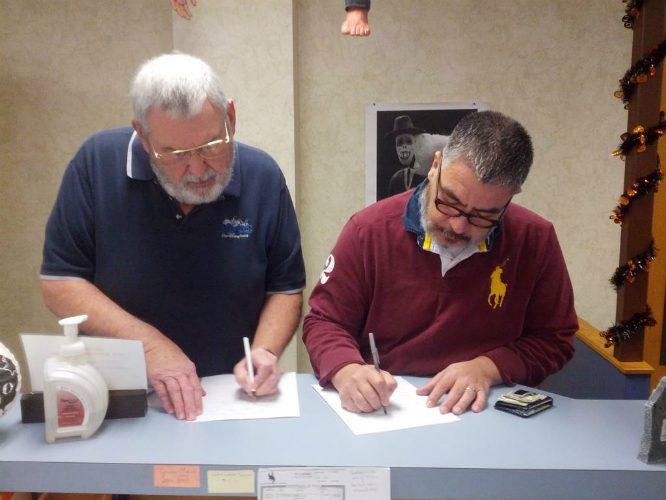 That’s Marvin Witt and Mike Romero, who’ve been together for 30 years, applying for a marriage license in the Natrona County Courthouse. “These people are terrorists,” Pat Robertson says. “They’re radicals and they’re extremists. … And I think it’s time pastors stand up and fight this monstrous thing.”

• Chris Kluwe addresses #GamerGate. He was a pretty good punter but his real gift seems to be the profanity-laced rant — an underappreciated art form.

• Remember back in 2011 when conservative Christians were claiming that dominion theology was a “myth”? People like Joe Carter, writing for First Things, denied its existence or significance, claiming it was just a bogeyman dreamed up by “liberal blogs and websites.”

Well, here’s what that imaginary bogeyman had to say at a recent fundraiser for the right-wing activist group, Alliance Defending Freedom. This is featured speaker David Benham:

The other featured speaker at the event was New York Times columnist Ross Douthat. But sure, let’s just pretend this is just a fringe ideology far from any real influence or power.

• Peter Enns really likes the new edition of The Jewish Study Bible, sharing a great example of what it gets right that other study Bibles (and a lot of Bible readers) get wrong. The book of Leviticus says sex is a no-no during a woman’s menstrual cycle, but it says this twice — commanding two very different, irreconcilable punishments. A lot of Christian study Bibles have notes cross-referencing the two passages in a way that seems to try to obscure or fudge the contradiction. The Jewish Study Bible just says, “Thus the law in 18:19 … directly contradicts [the law in 15:19-24].”

• So last night, shelving cleaning products while bopping to “All the Things She Said,” I realized I hadn’t provided the answer to our little Simple Minds question: their Top 10 hits “Don’t You Forget About Me” and “Alive and Kicking,” plus “All the Things She Said,” “Sanctify Yourself,” and “See the Lights.” (I’m not complaining, mind you. The Muzak loop with the surprising number of Simple Minds songs is much more up my alley than the mellow-oldies one they sometimes play that includes both “Afternoon Delight” and the Carpenters’ “We’ve Only Just Begun,” sometimes back-to-back.)