I was thinking some more about Duck Dynasty star Phil Robertson’s horrifying loveless ethics, and it reminds me of another joke. This isn’t a joke proper so much as a recent stand-up bit by Patton Oswalt, which is really more just an entertaining little argument. This longer clip includes some other fun bits, such as why Jesus’ feeding of the five thousand wouldn’t make him a good member of the Avengers:

The part I want to focus on is in the middle there, where Oswalt says this:

What if I 1,000-percent believed … that there was a giant, invisible anus hovering over me, and if I wasn’t nice, and helpful, and courteous and charitable to everyone I met, the anus would appear, suck me up into it, and I would be devoured by shit piranhas? And I believe this a thousand percent.

I would be the nicest guy you ever met. You’re like, “Patton, you’re so helpful and charitable and courteous to people, why is that?”

And I’d go, “It’s funny you should ask me that. You can’t see it, but there’s an invisible anus hovering over me, and if I’m not nice to everybody, it will appear and suck me up and I’ll be eaten by — well, I don’t need to tell you about the shit piranhas. We all know about those, right?”

That’s funny stuff, but I think Oswalt is overly optimistic about the potential positive effects of this dumb belief system.

Yes, the giant, invisible anus demands that its followers be nice, courteous, helpful and charitable, and its dictates will therefore probably produce in them some simulacrum of those things, but this kind of system can never produce the genuine article. It can only provide a counterfeit.

And the problem here isn’t only that the giant, invisible anus is a lie. Although that’s also the case, of course, making this an enormous, mendacious, disembodied anus. (I apologize if you now have the Beach Boys’ “Kokomo” stuck in your heads, but that joke is now 10 years old and it still makes me laugh. I miss you, The Editors.) 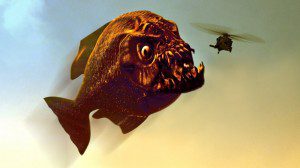 Oswalt’s hypothetical belief is demonstrably untrue. His proktolatrous metaphysics can be disproved. At some point, he’s bound to fail to be as nice and courteous as the GIA requires, yet when that happens it will not suddenly appear and suck him up to be devoured by the aforementioned pirhanas. When that happens, he will be forced to readjust the eschatology of the GIA, relegating its threatened punishments to some kind of afterlife. He can thus maintain the general idea of rewards and punishments while rendering the system unfalsifiable in this life.

Yet even with this adjustment, this hypothetical belief system cannot work the way Oswalt suggests it might. It just becomes one more example of the Vengeful God model in which ethics are based on a set of revealed rules. And that never works. Rule-based ethics can never produce love.

Obedience is always a poor substitute for love, no matter how extensive and well-crafted your set of rules might be. Love is voluntary, obedience is coerced. Obedience is governed by fear — fear of Hell or of GIA piranhas. It is shaped by the selfish motives of seeking reward and avoiding punishment, and selfish motives can ultimately only produce selfish results.

This is why the Gospels don’t talk about “greater obedience has no one than this …” And it’s why Jesus said things like this, “Go away and don’t come back until you learn what this means: I desire love, not obedience.”

Belief in Oswalt’s hypothetical GIA wouldn’t make a person nicer, more generous, more courteous and charitable, because those things are all of secondary importance in this system. The primary concern is obeying the rules. That’s what the system rewards or punishes, so that becomes the system’s focus. It doesn’t much matter that those rules require niceness, courtesy, etc., because in a rule-based system that puts the focus on obedience, what you’ll end up with — always — is a litigious, technical, lawyerly approximation of the bare minimum of such things, a facsimile constructed to keep the piranhas at bay.

Ultimately, whether we’re talking about Oswalt’s GIA or the God of Hell, any ethics based on a Vengeful God model is going to produce character and behavior in that God’s image. If someone 1,000-percent believed in this loveless, vengeful GIA, they would not thereby become the nicest person you ever met. They would, rather, become someone whose behavior and character resembled that of an enormous, mendacious, disembodied anus.