If you haven’t already heard, Star Trek is coming back to television.

Well, not quite television exactly — it’ll be a streaming-only show for CBS’s new effort in the world of online TV. And CBS might be plotting to charge us for that as part of the convulsive present situation in which multiple streaming TV producers are vying to offer us multiple subscription options as though we could all afford multiple monthly fees for all of them. And it’s CBS, too — the police-procedural factory that seems ill-suited to exploring new worlds and new civilizations unless it’s to make them the new headquarters for a CSI or NCIS unit.

But still, though, new Star Trek. That much is pretty cool.

TVLine has some fun suggesting 14 candidates for captain of the next Enterprise (if it is the Enterprise). From that slate of candidates, I’d probably cast my vote for Gina Torres. But I disagree with them about Matt Bomer. He shouldn’t be the next Star Trek captain — he should play an alien (or aliens) from a planet where everyone looks exactly like Matt Bomer. (Their civilization, I imagine, is in the midst of a violent blue-eyed civil war that the Federation is trying to negotiate a settlement to.) 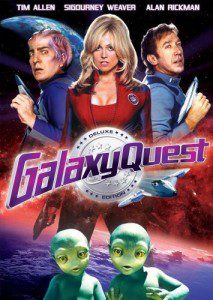 Here’s my main idea for what I’d do with the new Star Trek: Decenter the Earthlings.

Episode 1 starts in the academy, introducing us to three young recruits preparing for an elite mission. But this isn’t on Earth and these recruits aren’t the descendants of Earthlings. This is on one of those new worlds and new civilizations. It’s a small, out-of-the-way planet that’s still somewhat backwards by Federation standards. No one from this world has ever before served on a starship like the Enterprise.

We’d get to experience all of that through their eyes, meeting Vulcans and Klingons and humans from Earth as though for the first time. And the new recruits, coming from outside, would also bring fresh eyes to look at Gene Roddenberry’s utopian optimism. On their world, perhaps, things like disease, poverty, oppression, ethnic and religious strife, haven’t yet been eliminated the way they’re presumed long-dead in the earlier Trek series. So maybe instead of just showing us that these are things that we ought to be rid of some day, this would allow the series to explore how it is that might have happened.

There’d still be a traditional Trek crew, but they would — at first — be figures we met from the periphery through these new recruits. I’m thinking of the way Sally Sparrow met the Doctor in “Blink,” or the way some of the better West Wing episodes made President Bartlett seem larger than life by keeping him off camera. The show would eventually settle into the core ensemble of the bridge crew — now including the two young recruits (I’d be killing off one of them early on, Doyle-style, sorry) — but the camera wouldn’t walk on to the bridge to show us the main crew until the final shot of the first episode.

• Casting that is diverse enough to prompt a #BoycottTrek hashtag from racist trolls and GamerGaters on Twitter.

• Some member of the crew should be a distant descendant of Det. John Munch.

• A competing federation of planets who are religious zealots (but whose fervent, imperialist religion is shown in a way that explores why it appeals to so many people).

• More science. Both more of the weird stuff of theoretical physicist dreams and more of the mundane stuff, like how the crew of the Enterprise manages to avoid wiping out newly discovered planets by exposing them to alien viruses and pathogens.

• A renegade faction of former Federation members who have rejected the Prime Directive, choosing to meddle in less-developed worlds benevolently — sharing technology to heal disease, decrease scarcity, etc. Sometimes this would produce overwhelmingly positive results, sometimes perhaps disaster. This would mainly be a way of exploring Big Ideas like responsibility, but it could also just be fun — as when the Meddlers attempt to introduce Tribbles as a protein source for a malnourished world.

• Continuity cameos. I’m not above this. It’d be a cheap thrill, but still thrilling.