A final week of ’70s music at the Big Box

I’ve started noticing other stores going with a 1970s soundtrack for shoppers. I think maybe it’s a way of getting around worries about otherwise needing to pick a particular target demographic for the piped-in music. By the late 1980s, pop radio had begun splintering into dozens of categories and sub-categories, but in the ’70s, Top-40 still ruled, with radio offering rock and disco and Manilow in a single block of music. One minute it sounds like you’re riding along in the car with Dean Winchester, and then suddenly you’re docking at Puerto Vallarta with the passengers from The Love Boat.

Anyway, restocking the shelves at the Big Box doesn’t fully occupy one’s mind, giving me plenty of time to meditate on the meaning of the songs being piped in on the store’s music service. Maybe too much time.

• Tavares’ “Heaven Must Be Missing an Angel” starts off as an unmistakable artifact of the 1970s with the strains of Disco behind a hook based on the cheesiest of cheesy pick-up lines. But after the first minute or so the song morphs into something more like old-school 1950s Doo-wop. Maybe “heavenly” Disco songs just become untethered in time because something similar — but even more surprising — happens in the final minutes of Brenda Pointer’s “Heaven Must Have Sent You,” which ends with a burst of brassy scat a la Louis or Ella. It’s completely unexpected, but it fits perfectly, which is a delightful trick.

• The BeeGees’ “More Than a Woman” would be a period piece even without its ultra-’70s arrangement. If you covered this song today, giving it the most contemporary, cutting-edge musical interpretation possible, it would still come across as a relic of its time. No matter the musical setting, the lyric expresses something that could only be said by blow-dryed, bare-chested men in gold jackets with gold chains tangled in their copious chest-hair. 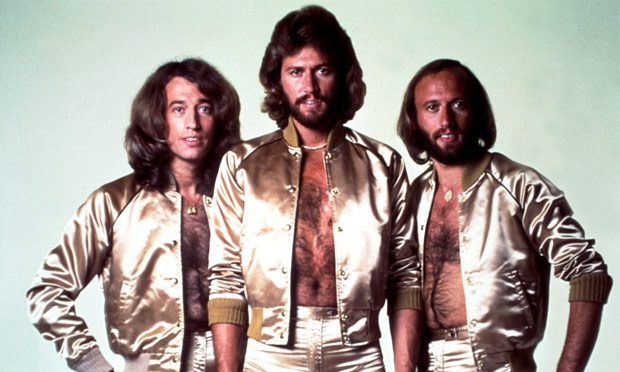 The chorus seems intended to praise a woman by suggesting that she is better than “a woman.” It posits womanhood as a category and approves of its object due to her transcendence of that category. If she were merely “a woman,” she would apparently be unworthy of the singer’s love and admiration. Her worthiness is contingent on her being “more than a woman.”

I’ve given this a great deal of thought, but haven’t yet managed to find any way of interpreting that phrase — “More Than a Woman” — that doesn’t require some appallingly misogynistic underlying assumptions.

The best I can do is to read this as a kind of repentance of some earlier attitude. Perhaps the singer intends to say that he used to regard all women as objects — interchangeable, disposable, impersonal and sub-personal inferior creatures. But now, he may be saying, this new love has taught him to view her as something more than that. This might have been a teachable moment, leading him to understand that his previous dismissive generalizations about the category “woman” were a distorted lie. But the singer/narrator/protagonist can’t quite come to grasp this. He persists in characterizing the object of his affection as an exception to the general view in which he seems to still regard all other women. By repeatedly hailing her for what he regards as her exceptional quality, he also repeatedly reaffirms his enduring misogynistic ideology, repeatedly reassuring himself and the listener that “a woman” is an inferior category unworthy of respect or love.

And that’s my most charitable interpretation. Am I missing something here? Is there a more positive way of interpreting this song?

• “Have You Heard About the Lonesome Loser?” confuses me. (Beyond my initial confusion of being sure this was Kansas and not the Little River Band.) The song repeatedly shifts between the second and third person in ways that invite competing interpretations. The titular loser is alternately referred to as “you” and as “he,” with both seeming to be ways of referring to the singer himself. When the singer says, in the chorus, “He’s a loser, but he still keeps on tryin’,” it seems that he’s referring to himself. It seems that way in the verses, too, when he switches to the second person — “You have to face up, you can’t run and hide.” This sounds like an affirmation — like he’s addressing those words to himself.

But this gets trickier due to song’s use of the second person in it’s title question and refrain: “Have you heard about the lonesome loser?” That “you” cannot be an indirect reference to the song’s narrator — that has to be addressed to the song’s listener (it seems to be a singular you). Is this the same “you,” with the same antecedent, as the “you” in those verses who’s being urged to face up and not be such a loser?

Later in the song, it becomes harder to tell if these murky, undefined antecedents should be heard as interchangeable or as opposed to one another — “He don’t know what goes on in his head / But if you watch very close you’ll see it all.”

So is this confessional or accusational? Is the Little River Band urging themselves not to be such losers, or is it telling us, the listeners, that we’re all a bunch of losers? It’s hard to tell, so I can’t quite tell if my emotional response to this song should be, “Hey, buck up there, buddy,” or “Yeah? Same to you and the horse you rode in on, you Kerry Livgren wanna-be.”

• The ’70s channel served up this block of songs, in this order, the other night: Abba’s “The Winner Takes It All,” Barry Manilow’s “Looks Like We Made It,” and Linda Ronstadt’s “Long, Long Time.”

Whether you like those artists and those songs is not the point here. You don’t need to like those songs to acknowledge that each of them is, in its own way, effective. And the cumulative effect of three such effective songs, back-to-back-to-back, created a palpable sense of melancholy that settled on the Big Box like a fog, clouding our eyes and thoughts until it was, mercifully, dispelled a few songs later by “Killer Queen.”

This was on a music service specifically designed and marketed to retailers and intended to create an atmosphere conducive to shopping. How is that supposed to work? Some customer grabs a cart and heads over to Aisle 35, thinking about maybe upgrading the lighting fixtures in their living room. Halfway there, they hear Ronstadt’s voice breaking along with her heart as she sings, “I’ve done everything I know to try to change your mind …” I’m not sure how that’s supposed to help sales.

• Whatever complaints I may have about the ’70s channel for our in-store music, I will miss all of this — the Disco, the Manilow, even the Starland Vocal Band — in the weeks to come. Today is Black Friday, the darkest day in retail world, when the soundtrack switches to Christmas music, endlessly and relentlessly, from now until New Years.

I love Christmas music, generally, but not the kind they insist on playing at the Big Box, which features endless versions of “White Christmas” and “Rudolph the Red-Nosed Reindeer” recorded by artists who seemed to think Bing Crosby and Gene Autry were too edgy and musically daring. The War on Advent has begun.

November 27, 2015
Left Behind Classic Fridays, No. 59: 'Everybody loves Rayford'
Next Post