Left Behind Classic Fridays, No. 71: ‘The visitation pastor’

The New Hope Village Church is being run by a post-Rapture skeleton crew consisting of the apostate Rev. Bruce Barnes and get-back Loretta. Most of the following chapter consists of the long, sad saga of Barnes’ former sham-faith. 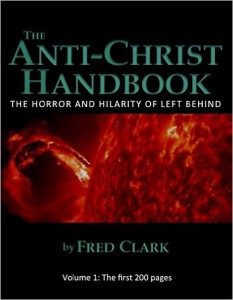 Before we dive into that extended monologue, a brief aside on the Rev. Barnes’ former vocation. He (re-)introduced himself to Rayford Steele as New Hope’s “visitation pastor,” and repeatedly makes clear that his was a lesser, subordinate role to that of the senior pastor — the Rev. Vernon Billings. This is typical of the hierarchical structure among the staff at many nondenominational churches. This ranges from the senior pastor at the top (i.e., the pope) down through the various “associate” pastors, followed by “assistant” pastors — including visitation staff, like Bruce — on down to the youth pastor, who is just out of Bible College, wears jeans, and ranks somewhere just below the worship leader and just above the head usher.

“I was good at it,” Bruce Barnes says of his role as visitation pastor.

This is not true. This cannot be true. All of Bruce Barnes’ extended testimony to Rayford and Chloe is premised on the idea that his getting left behind produced an epiphany of self-knowledge, but this newfound self-knowledge does not extend to the recognition that he cannot have been very comforting in his role as a half-assed poser of a visitation pastor.

Part of the problem here, I think, is that Tim LaHaye is, himself, was a senior pastor during his days at Scott Memorial Baptist Church in San Diego. I doubt he understands the nature of “visitation” ministry any better than Bruce Barnes does. Here’s how Barnes described that work:

“My job was to visit people in their homes and nursing homes and hospitals every day. I was good at it. I encouraged them, smiled at them, talked with them, prayed with them, even read Scripture to them.”

Isn’t that nice? He smiled at them. But what Barnes/LaHaye don’t explain or seem to understand is why these people are stuck in nursing homes and hospitals. One gets the sense that an amiable visit from Barnes might have been welcomed by a parishioner who was, say, laid up for six weeks with a broken leg that would soon heal as good as new. But for a parishioner undergoing long-shot cancer treatments — adding the pain of chemotherapy to the already crippling pain of their disease in the hopes that maybe, maybe it would help them live long enough to see their youngest child graduate fifth grade — I can’t imagine that a visit from Guy Smiley would have been much help.

It’s not unusual for seminary students to experience a crisis of faith — and not every student’s faith survives this crisis. The common misperception is that this is due to all that book-larnin’ — that reading Bultmann or the latest from the Jesus Seminar is inherently dangerous to one’s faith. (Far safer to maintain a pose of anti-intellectual piety — which is, again, why many evangelicals prefer the safety of “Bible college” to the academic perils of seminary.) I suppose it’s theoretically possible that some suggestible seminarian might be overwhelmed by such exposure to liberal scholarship, but I’ve never met such a person. No, the real reason that seminary is a crucible for faith has nothing to do with intellectual study. It has to do with CPE.

CPE stands for “clinical pastoral education” — better known as the front lines. CPE has nothing to do with Vernon Billings’ job. It doesn’t involve preaching from a pulpit. It involves, rather, visitation — ministering to people in “nursing homes and hospitals.”

Gordon Atkinson, the Real Live Preacher, refers to CPE as “Tear the Young Minister a New One” and describes how his own CPE experience led to a dark night of the soul:

… people facing death don’t give a fuck about your interpretation of II Timothy. Some take the “bloodied, but unbowed” road, but most dying people want to pray with the chaplain. And they don’t want weak-ass prayers either. They don’t want you to pray that God’s will be done. …

I threw myself into it. I prayed holding hands and cradling heads. I prayed with children and old men. I prayed with a man who lost his tongue to cancer. I lent him mine. I prayed my ass off. I had 50 variations of every prayer you could imagine, one hell of a repertoire.

I started noticing something. When the doctors said someone was going to die, they did. When they said 10 percent chance of survival, about 9 out of 10 died. The odds ran pretty much as predicted by the doctors. I mean, is this praying doing ANYTHING?

Compare that with Barnes’ facile summary of his role as a “visitation pastor.” If Barnes ever met with someone who was dying, he doesn’t seem to have noticed. The RLP goes on to describe the final, fatal blow that CPE dealt to his young faith. Her name was Jenny:

Jenny had only one request. “I know I’m going to die, chaplain. I need time to finish this. It’s for my kids. Pray with me that God will give me the strength to finish it.”

She showed me the needlepoint pillow she was making for her children. It was an “alphabet blocks and apples” kind of thing. She knew she would not be there for them. Would not drop them off at kindergarten, would not see baseball games, would not help her daughter pick out her first bra. No weddings, no grandkids. Nothing.

She had this fantasy that her children would cherish this thing — sleep with it, snuggle it. Someday it might be lovingly put on display at her daughter’s wedding. Perhaps there would be a moment of silence. Some part of her would be there.

I was totally hooked. We prayed. We believed. Jesus, this was the kind of prayer you could believe in. We were like idiots and fools.

A couple of days later I went to see her only to find the room filled with doctors and nurses. She was having violent convulsions and terrible pain. I watched while she died hard. Real hard.

As the door shut, the last thing I saw was the unfinished needlepoint lying on the floor.

A faith that matters, a faith that is worth anything real, or anything at all, has to be able to account for Jenny’s story. Her story, after all, is everyone’s story — the details of time and place may differ somewhat, but not the ending. You and me, and everyone we know, we’re all going to die. Hard. A faith that cannot account for this must give way either to despair or denial.

The faith described in Left Behind cannot account for this. It’s all about denial. Proudly so. “Can you imagine,” Irene Steele gushes, “Jesus coming back to get us before we die?”

Can you imagine a visitation pastor bringing such a message to hospitals and nursing homes and people like Jenny?

Bruce Barnes might have been an interesting character if he had lost his faith due to his experience with human suffering. That would have raised some real and interesting questions. But the world of LB is not that real or that interesting. It is a world in which human suffering exists only for others at the periphery. And it is always deserved.

New Hope is a fictional church, but it is based on real-world congregations. These actual churches are run by senior pastors preoccupied with their weekly sermons and their “prophecy seminars.” But somewhere down the ladder of their church hierarchy they also employ visitation pastors — real people who spend their days in real hospitals and nursing homes, encountering real suffering.

What on earth do you suppose they say? What kind of spiritual comfort can they bring when all they are carrying is the ancient joke of Bildad’s theodicy and the gospel of the denial of death? Bruce Barnes says he “read Scripture” with the people he visited, but what scripture? Every passage in the Bible that offers the hope of resurrection is twisted, in LaHaye’s PMD theology, into an argument for the avoidance of death through the “Rapture.”

LaHaye and Jenkins literally could not imagine meeting someone like Jenny, so in the imaginary scenario of LB Bruce Barnes never did.

But even in the shallow, suffering-free world of LB, and even by L&J’s own shallow standards, Bruce Barnes was not a good visitation pastor. Two sentences after Barnes tells us that he was “good at” his job, he tells us this:

“I was lazy. I cut corners. When people thought I was out calling, I might be at a movie in another town. I was also lustful. I read things I shouldn’t have read, looked at magazines that fed my lust.”

Rayford winced. That hit too close to home.

March 3, 2016
Some people punch down when they get scared. True.
Next Post