It seems that some of the same right-wing hacks who have for years suggested that Barack Obama is a secret Muslim now want us to believe that Donald Trump is a secret born-again Christian.

John Fea flagged this over the weekend, finding this nugget in an interview with James Dobson and mega-church pastor Michael Anthony:

Dobson: There are a lot of people ministering to him (Trump) personally … He did accept a relationship with Christ. I know the person who led him to Christ. And that’s fairly recent.

Anthony: No kidding. How recent?

Dobson: I don’t know when it was, but it has not been long.

Dobson: I believe he really made a commitment, but he’s a baby Christian.

The first thing we should note about this is that this is a third-hand statement about Donald Trump, not a statement from Trump himself. Trump himself has not yet said anything publicly about this alleged recent conversion experience in which he was “led to Christ” and “accepted a relationship with Christ.”

(Nor has Jesus Christ yet offered any public comment confirming or denying this. Based on Trump’s long track record of refusing to pay suppliers or anyone else he’s been in a “relationship” with, Jesus might be understandably reluctant about entering such a deal.)

Third-party statements about somebody else’s personal faith are always a bit dubious, so it’s usually prudent to wait until we hear what people have to say about themselves. Dobson’s claim is particularly strange in this case because of the circumstances here. Being a secret born-again Christian is odd in any case — we evangelical types, as the name suggests, usually aren’t shy about telling others that’s who we are. Nor is Donald Trump, specifically, previously known for being reluctant to talk about himself. So the idea of a “secret” born-again Christian is weird and the idea of Donald Trump keeping a secret is even weirder. 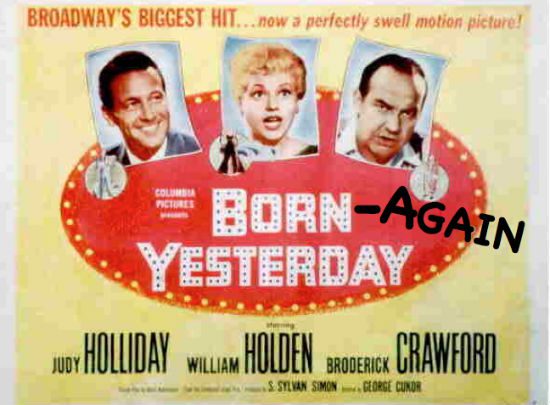 That latter point seems especially true given that Trump is just coming off a primary election campaign in which he did everything in his power to try to convince white evangelical Republicans that he was one of them, and that he is now in the middle of a PR-offensive in which he is explicitly courting the support of those same white evangelical voters.

But the second thing we should note is that this third-hand allegation about Donald Trump comes from a source who, himself, lacks any credibility: James Dobson.

James Dobson is not a trustworthy person. He has a very long history of saying many, many things that simply are not true. I’m reluctant to say that this makes him dishonest because the guy seems so thoroughly immersed in his own delusions that he may (mostly) imagine he really believes the many falsehoods he repeats, invents, and promotes. But the fact remains that “James Dobson claims X is true” provides more reasons to doubt X than to believe it.

See, for example, Dobson’s “Letter From 2012” — a weird partisan screed informing his followers of what would inevitably ensue from the election of Barack Obama. In that “letter,” Dobson makes 35 distinct claims about Obama’s agenda, goals and policies. All 35 of them are demonstrably false. The ratio of falsehoods-to-statements in Dobson’s manifesto is 1-to-1. Anyone who trusted Dobson’s letter was misled 35 times over. And it wasn’t just that his allegations were false and wrong, but that they were fantastically false and wrong.

So this is the man we’re dealing with here. Of course, it doesn’t necessarily follow that any given statement must therefore be false just because James Dobson said it, but even though I’m already certain that 2+2-4, if I heard James Dobson say that, I’d want to get out a calculator just to double-check.

Dobson’s initial claim seems to be one he didn’t expect to travel beyond the limited, sectarian (gullible) audience of the small Christian radio station broadcasting that interview. After his claim about Trump’s recent conversion got picked up and recirculated by The New York Times and other major media, Dobson offered an uncharacteristically uncertain* damage-control press release:

Only the Lord knows the condition of a person’s heart. I can only tell you what I’ve heard. First, Trump appears to be tender to things of the Spirit. I also hear that Paula White has known Trump for years and that she personally led him to Christ. Do I know that for sure? No. Do I know the details of that alleged conversion? I can’t say that I do.

… All I can tell you is that we have only two choices, Hillary or Donald. Hillary scares me to death. And, if Christians stay home because he isn’t a better candidate, Hillary will run the world for perhaps eight years. The very thought of that haunts my nights and days.

He has nightmares, you see, and he thinks you should regard those nightmares as authoritative — just as he does.

So who is this Paula White that Dobson says led Donald Trump to Christ? She’s a televangelist and “prosperity gospel” preacher most famous, perhaps, for her refusal to cooperate with Republican Sen. Chuck Grassley’s federal investigation of self-enriching TV “ministries.”

So you can add White’s credibility to that of Dobson. Or multiply them. Either way, you’ll get the same result. (Nor does that result change when you add Ralph Reed’s trustworthiness to this equation.)

The bottom line here, though, is this: When asked point-blank if his claim about Trump’s conversion is true, Dobson’s response was to emphasize what is at stake in this election. Forced to provide evidence for his claim, he countered with a reminder that nothing else was as important to him as defeating Hillary Clinton in what he is describing as the seventh-consecutive “most important election of all time.”

That’s not an answer. Or, rather, it’s not a direct answer. What Dobson is saying is that we need to understand his priorities here. What’s more important? Telling the truth about Donald Trump and Hillary Clinton? Or ensuring that Hillary loses?

For Dobson, the answer is obvious. Fibbing about Trump’s conversion isn’t something that scares him to death or haunts his nights and days. But a woman president is.

* Just like a certain tangerine-tinted reality-TV personality, Dobson tends to be extremely reluctant to ever admit that he’s been wrong. That may be due to his strange interpretation of Nazarene doctrines of sanctification (the guy literally believes that he’s far less sinful than you are) or it may be due to his near-total immersion in the alternate reality of his delusions. Or it may just be that he’s an arrogant, authoritarian male who has inhabited an identity and marketed a personal brand that cannot survive if he were ever to admit even a hint of fallibility. That’s why Dobson, like Trump, tends to double-down on misstatements rather than to try to correct them or to walk them back. If completely cornered, he’ll do what Trump does and just flip-flop entirely — insisting that he never said what he just said days or moments before.