Ben Howe — a writer for the very conservative site Red State (and a white evangelical PK) — writes in The Atlantic about “Milo Yiannopoulos and the Church of Winning.” He gets a lot of smaller points right here, but gets one rather large point backwards.

Howe is right to criticize white evangelical leaders for enabling the ascendant form of conservative politics embodied by people like Donald Trump and Milo Yiannopoulos. He calls out Franklin Graham, Jerry Falwell Jr. and Dallas pastor Robert Jeffress by name, but they’re really just some of the most vocal examples. Apart from a handful of (largely unheeded) anti-Trumpers like Russell Moore, most of mainstream white evangelicalism went along, complacently yielding to Lil’ Graham and Jerry Jr. and Trump himself because, after all, abortionandhomosexuality outweighs anything and everything else, and any deal that scores those points is a deal they’ve convinced themselves they have to accept.

Howe is also right to say that Trump’s ugly history of predatory sexual behavior ought to have disqualified him from office and from any evangelical support.  And he’s also right about the sick irony of seeing the same white evangelicals who spent decades railing against the supposed “relativism” of postmodernism now embracing the very caricature they tried so hard to project onto others. This isn’t a new or recent development, but it’s good to see Howe finally recognizing the crude “situation ethics” that have shaped white evangelical political engagement since the election of Ronald Reagan.

But Howe is weirdly unconcerned with Trump’s policies. He doesn’t seem to worry much about Trump’s agenda of life as a Hobbesian battle of neighbor vs. neighbor. Or about Trump’s bigotry toward everyone other than white evangelical males. He appreciates that Trump is personally immoral and deplorable, but doesn’t seem much concerned with the white nationalist, Herrenvolk political agenda that flows out of that personality.

One almost gets the sense that Howe’s biggest gripe with Trump’s “Church of Winning” is that it has distracted white evangelicals from the narrative of moral and cultural decline that he seems to have been enjoying so much.

And thus Howe doesn’t see that Trump is, among other things, the end-product (so far) of that very narrative of decline — the product of generations of white evangelical jeremiads bemoaning every small step of greater justice and greater equality for women, for people of color, and for religious and sexual minorities. That narrative has always condemned and rejected “Selma, Seneca Falls, and Stonewall” as — in Howe’s words — “American cultural decline” that is “moving the country farther from resembling [a] Christian society.”

Once you embrace that narrative of decline, then the white male backlash of the Trump administration is your logical conclusion. Howe admirably wants to say “Never Trump,” but he’s still stuck in the white evangelical narrative that sees equality and justice for women and people of color as evidence of moral depravity and cultural decline. He’s still on a path that leads, inexorably and exclusively, to Trumpism.

But where were Falwell, Graham, and the scores of evangelicals who had given cover to this president’s moral deficits as the Yiannopoulos unfolded? Silent.

They remained silent precisely at the moment that their moral responsibility should have instructed them to speak loudly; the American cultural decline they promised to reverse continues, moving the country farther from resembling the Christian society they’ve often defended.

What exactly is this continuing “American cultural decline” Howe speaks of? He doesn’t say because as a white evangelical and a writer for Red State he doesn’t need to say. It’s just something that “everybody knows” in those little realms. There’s no need in those little worlds to describe what this means, and trying to do so, in detail, turns out to be a dangerous business because much of what this alleged “cultural decline” refers to involves things that most people rightly regard as advances in morality, human dignity, human thriving, the general welfare and the blessings of Liberty for ourselves and our Posterity.

The most generous and charitable description of this narrative of cultural decline that I’ve found comes from Dave Gushee’s 2015 book, Changing Our Mind (we discussed this a while back). Gushee writes:

This narrative sees modern western and U.S. history as mainly a sad story of apostasy from an original Christian core. Rarely focusing on historic conflicts and failures in Christian, western or U.S. history, this story instead focuses on, dreams of or ruminates about a time when Christianity held the dominant position in western and American culture, when Christian theology and morality more often prevailed, and when sexual ethics was understood along traditionalist Christian lines — heterosexual, marital, faithful, permanent, etc. The role of the faithful Christian church is to stand against cultural decline, or at least against the encroachment of such decline into the Church itself.

Basically, by “American cultural decline,” they mean the 1960s. And by the ’60s, they mean the Civil Rights Movement and feminism. But since they can’t just outright say civil rights and feminism, they say “the ’60s” and wink at one another while hoping that everyone else gets distracted by thoughts of drug-addled hippies holding a free-love-in at Woodstock.

So, for example, here is Fred Blackwell’s photograph of a Woolworth’s lunch counter in Jackson, Mississippi, 1963. 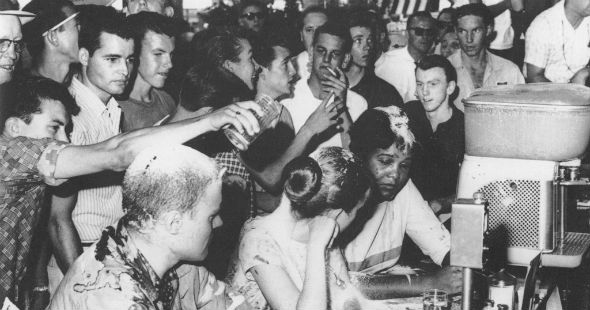 This is the embodiment of the “the American cultural decline” that white evangelicals have long “promised to reverse.” But that supposed cultural decline isn’t represented here by the thuggish mob of white people smearing mustard over the head of Annie Moody (right), or pouring soda and spray paint on Joan Trumpauer, or beating John Salter with brass knuckles as he sits at that lunch counter. Nor is that “cultural decline” represented by the all-white police force that stood by, silently encouraging this mob.

No, the threat here is “the ’60s.” The threat to “the Christian society white evangelicals have often defended” is embodied by Moody, Trumpauer and Salter. They’re the ones breaking the law here — violating custom and tradition, and challenging the “religious liberty” of business-owners.

The leering mob behind them? Those are the bold conservatives fighting against this threat of “American cultural decline.” They’re the ones bravely standing athwart history and yelling Stop!

They’re the ones trying to make America great again. That’s what the narrative of decline is all about.

(If you’re not at work and there are no children around, let me recommend the Dickies’ version of that song, which captures its spirit a bit better, I think.)