The Resenters: Building Hell in Heaven’s despite

The Resenters: Building Hell in Heaven’s despite March 18, 2017 Fred Clark

There was a story in Sunday’s paper that will make some people happy and some people unhappy.

Neither category of readers is directly affected by this story, so these opposite responses are a matter of choice, or of many choices over time that have come to shape habit, perception and character.

Choice, habit and character are the language of ethics, and the distinction I’m exploring here is, primarily, an ethical one. It is a matter of morality — of wrong and right, bad and good, selfish and unselfish.

But this article does not present itself as an ethical dilemma, and neither set of readers will experience it that way. Their respective reactions will seem to them, rather, as simply a matter of temperament or sentiment — a “gut reaction.” And that gut reaction will be felt as either happiness or as unhappiness, depending on habit and character cultivated over time.

Since this story is, in fact, a happy one, we can further see that one such gut reaction is more appropriate — more accurate — than the other. The inaccurate response carries consequences. To respond to happiness unhappily is to live in conflict with what is — a recipe for further unhappiness.

When St. Paul advised the early church to “rejoice with those who rejoice and mourn with those who mourn” he was speaking mainly of empathy as a necessary prerequisite for love, justice and virtue. But he was also reminding his readers to live honestly and accurately. To mourn when others rejoice and to rejoice when others mourn is cruel, but it is also out of step with reality. Conducting your life out of step with reality is self-destructive. It will make you miserable.

Anyway, the story. What happened was that 78 poor children whose fathers are incarcerated received free back-to-school supplies provided by three area churches. Their dads were permitted to be on hand to help present these presents, getting a rare chance to spend a few hours with their young kids.

This is, unambiguously, a Good Thing. “Go and tell John what you have seen and heard: the needy have their needs met, children are prepared to learn, broken families experience healing, the poor have good news brought to them.”

The opposite, anomalous response is more interesting. Why do some readers respond to this good news with such hostility? Why does this story make them angry and unhappy?

The answer is suggested, I think, in William Blake’s short poem, “The Clod and the Pebble.” It reads at first like a Sunday-school jingle, but as usual with Blake, there’s quite a bit more going on here.

“Love seeketh not itself to please,
Nor for itself hath any care,
But for another gives its ease,
And builds a heaven in hell’s despair.”

So sung a little Clod of Clay,
Trodden with the cattle’s feet,
But a Pebble of the brook
Warbled out these metres meet:

“Love seeketh only Self to please,
To bind another to its delight,
Joys in another’s loss of ease,
And builds a hell in heaven’s despite.” 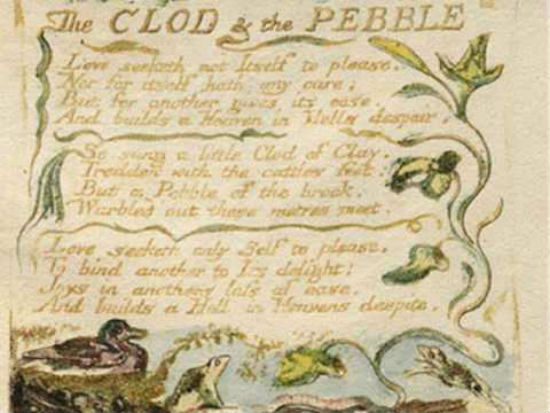 That pebbly centrality of self is always on the lookout for new sources of unhappiness, new grievances, new slights or causes for offense and resentment. And when that is what you’re looking for, that is what you’re likely to find, even in a heart-warming, happy story about churches getting it right by helping poor kids get ready for school.

Here is my approximation of the unhappy response to that story. This is not entirely a product of my invention or imagination — it’s based on having seen thousands of such reactions in the online comments to newspaper stories, in letters to the editor and on cable news. I’m not sure it’s the most generous representation, but I don’t think it’s inaccurate:

Why should the children of criminals get something for free? Something that I, as a hard-working, tax-paying, law-abiding citizen had to pay for? I just spent two weeks driving all over spending my hard-earned money on back-to-school supplies for my kids and nobody gave me anything. This is how the world works and it’s unfair to me. I follow the rules and I always get the short end of the stick. Meanwhile, those people get handouts. The game is rigged in their favor and I’m getting screwed yet again. Freeloaders. Lucky duckies. I resent them. I resent them and I am convinced that they are the reason I have to work and scrape and scramble as much as I do.

This angry resentment is periodically a major force in American politics. It is a destructive force — destructive of self and destructive of the whole (self-destructive people always have bad aim). The Resenters rejoice when others mourn and mourn when others rejoice, and their politics of resentment has the crabs-in-a-bucket effect of making things worse for everyone, themselves included — making sure that nothing ever improves, that no problem is ever solved. The politics of resentment can never be for anything. That which benefits others will provoke resentment, even if it benefits all, including the Resenters themselves. They will still manage to resent the benefit to others — mourning at their rejoicing — convincing themselves that they might have benefited more if those others hadn’t also been unjustly included in the common good.

The politics of resentment is clearly illiberal, but it is not conservative either. It doesn’t present a coherent political ideology. That’s part of why the purveyors of this resentment so often seem to contradict themselves. Fox News, for example, portrays itself as conservative, but it’s real guiding principle is that of pebblish resentment.

Fox is quite skillful, usually, at the fine balancing act this requires. Cultivating, teaching, and nurturing perpetual resentment involves a measure of restraint. The story in today’s paper can be used to encourage this resentment, but take it too far and you arrive at something more obviously absurd: “I wish I was a prisoner so my kids could have it easy like prisoner’s kids do.” Unless one is extremely far gone, the silliness of that notion will cause the swelling resentment to burst like an over-filled balloon. That would force the Resenters to acknowledge that they are actually much better off than the supposed objects of resentment, potentially exposing them to a sense of gratitude or empathy — the antidotes for the disease of perpetual resentment. The happiness that gratitude and empathy carry cannot be tolerated by the politics of resentment. Perpetual resentment requires — and generates — perpetual unhappiness.

That unhappiness, more than anything else, is what interests me here. The purveyors and proselytizers of resentment make their followers unhappy. Fox News and talk radio make their viewers and listeners less happy. The closest they can come to allowing joy is schadenfreude, but all other forms of delight are forbidden. Resentment, indignation and offendedness can be addictive, and thus these outlets remain popular, but lots of addictive things are popular despite precluding joy. Smoking crack makes you feel good too, but that’s not the same as making you happy.

Blake’s poem, like St. Paul’s maxim, conveys an essential law of the universe: Selfishness creates misery. Seeking “only Self to please” can never really succeed in pleasing self. Rejoicing and mourning at all the wrong things renders one incapable of ever really doing either.

The Resenters seek to make a virtue of selfishness, to embrace its misery and inflict it on others through their politics of resentment — building a hell in heaven’s despite and forcing others to live in it with them. That effort, as I mentioned earlier, is an ethical endeavor — a matter of morality or, more precisely, of immorality. It’s a sin.

But I’m not focused on morality here. Here I just want to consider happiness and the perplexingly self-destructive choice of preferring its opposite — resentment, indignation, high dudgeon, umbrage, offense, whatever you want to call it.

The Resenters have learned to be unhappy. They have been taught to respond unhappily to happiness, taught by a steady toxic diet of Fox News and resentment radio and the demagogues of the politics of resentment. Part of our job, then, must be to help them learn again how to be capable of happiness. We must teach them, remind them, show them how to again look at a smiling child with a new backpack and to take delight instead of taking offense.