Stories with heroes and stories without them August 7, 2018 Fred Clark

• You’re going to want to read Robin Abcarian’s Los Angeles Times account of “The tender, terrifying truth about what happened inside the Trader Joe’s hostage siege.”

MaryLinda Moss and Mike D’Angelo acted with remarkable courage, kindness, and calm presence of mind. They saved a lot of lives.

• Speaking of heroes … there are none working at CoreCivic, a loathesome for-profit company that makes all of its money packaging human suffering and sending the bill to taxpayers:

CoreCivic, formerly known as Corrections Corporation of America, is one of the nation’s largest owners and operators of private prisons, operating roughly 65 facilities across 19 states, including the Metro Davidson County Detention Facility on Harding Place.

The company contracts with Immigration and Customs Enforcement and runs eight immigration detention centers, but has repeatedly declined to provide current copies of its contracts to operate these facilities.

But there are heroes out there throwing sand into the gears of CoreCivics’ repugnant machine. “Protesters arrested after blocking CoreCivic headquarters in Nashville,” Natalie Allison reports for The Tennessean:

Ashley Dixon, a former CoreCivic correctional officer who worked at the state’s largest private prison, Trousdale Turner Correctional Center, until she quit about eight months ago, was among the protesters arrested.

“I quit because I witnessed two people die due to medical neglect,” she said. Two of the dozens of tombstone signs protesters put up bore the names of those two inmates, Jonathan Salada and Jeff Mihm.

Nashville Public Radio’s report on the protest includes a quote from the Rev. Jeannie Alexander, a former prison chaplain:

“From our perspective, this corporation should be abolished,” said Jeannie Alexander, an organizer. “The only way it exists and operates in Tennessee is through the legislative power, which allows the caging of humans to be contracted out for profit. 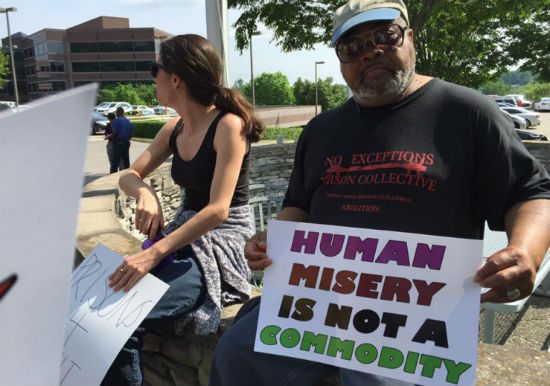 • Attempted robbery is a crime. If you try to steal another person’s property, you can wind up in jail.

Seems like the same thing should be true for attempting to steal another person’s franchise. That theft has been Kris Kobach’s mission in life for years and years. Stealing other people’s votes — stealing their right to vote and to participate as equal citizens — has been his purpose in life, his whole reason for getting up in the morning every day. Does that make him evil? Certainly. Does it make him a criminal? Absolutely, even if not technically.

The best that can be argued for Kobach is that, yes, he’s a criminal, but that his long grift wasn’t meant to steal the franchise from non-white voters as much as it was just a grift meant to gouge massive legal fees from taxpayers in defense of his constitutionally, logically, and factually indefensible claims.

Either way, Kris Kobach should be in jail. Or in exile.

• Tim Dickinson’s recent Rolling Stone report has gotten a lot of attention: “The NRA Says It’s in Deep Financial Trouble, May Be ‘Unable to Exist’.”

The headline is accurate in that this is what the NRA says, but that doesn’t mean that what the NRA says is accurate. The claim of an existential financial crisis is all-too familiar to me, as someone who spent most of his life in the world of religious nonprofits. It’s exactly the kind of hyperbolic scary story that the shadier direct-mail driven “ministries” tend to rely on, even though such Chicken Little appeals sometimes producing a stern finger-wagging from ECFA.

Whether such claims are made in breathless fundraising letters or in similarly self-serving legal filings, they should always be presumed false until otherwise proved true.

• Eric Metaxas is a very silly man. The latest evidence of this is his adulation for Katie Hopkins — a dim UK white supremacist hatemonger whose opinions were too vile and embarrassing for the Daily Mail.

Many thoughtful white evangelicals are lamenting Metaxas’ descent into full-on, bald-faced alt-right white-nationalist nuttery. They say it’s shocking because they’d never have suspected such a trajectory for the same man who once stood up and harangued Barack Obama in a speech at the National Prayer Breakfast.

Others have been predicting exactly this trajectory for Metaxas ever since that prayer breakfast speech — precisely because of that speech.

Given that the latter group was right while the former was not, it might be worthwhile for those in the former group to look back at that speech they so admired at the time and try to understand why the very things they then admired were all-but guaranteed to lead a person down the path Metaxas has continued along.

This was all present in that. That leads to this. It’s not surprising.

August 8, 2018 George Whitefield was worse than Hybels, Swaggart, Haggard, Patterson, Pressler, Bakker, Hinn, Tilton and all the rest put together
Recent Comments
0 | Leave a Comment
Browse Our Archives
get the latest from
slacktivist
Sign up for our newsletter
POPULAR AT PATHEOS Progressive Christian
1