Here’s an interesting juxtaposition in two stories that arrived back-to-back in my RSS feed news-alert for the word “evangelical.” One is from a UK newspaper’s profile of the new Australian prime minister, the other comes from an evangelical conference in Rome organized by the Lausanne Movement (or the Lausanne Committee for World Evangelization).

Both of these articles involve central questions of white evangelical identity and doctrine. And both are thus extremely dismaying in the same way as those horrifying surveys we looked at in the first two posts discussing how “MAGA” seems to have supplanted the Great Commission for white evangelicals (see here and here). 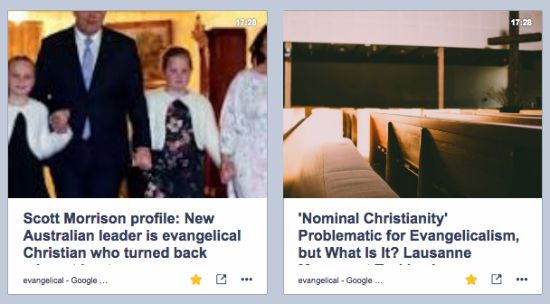 Let’s start with the second item: “‘Nominal Christianity’ Problematic for Evangelicalism, but What Is It? Lausanne Movement Tackles Issue.”

I have sometimes half-jokingly said that evangelical Christianity is the branch of Protestantism defined by its perpetual argument over who does and who does not count as a real, legitimate evangelical. Evangelical identity, in other words, is bounded by participation in disputes over the boundaries of evangelical identity. Given that, it’s hard to think of a more quintessentially evangelical headline or topic than this one.

Most people — including most white evangelicals — have never heard of the Lausanne Movement, but it’s a pretty big deal among faculty lounge evangelicals and for the gatekeeper class. It began in the 1970s with a big international conference on “world evangelism” organized by Billy Graham.* That conference produced, among other things, the Lausanne Covenant, a widely used doctrinal confession regarded as something like the closest thing to an agreed-upon creed of “orthodox” evangelicalism.

These days, Lausanne plays a similar role in white evangelical theology to the role the International Bureau of Weights and Measures plays for the metric system. Think of the Lausanne Covenant as the evangelical equivalent of the International Prototype Kilogram — a theology painstakingly preserved in a vault in Europe under meticulous climate-controlled conditions to ensure it never changes.

Alas, as this article illustrates, Lausanne’s understanding of evangelical doctrine has changed a great deal. Back in the 1970s, when Billy Graham et. al. were gathering for that conference in Switzerland, “nominal Christianity” was a big topic for evangelicals concerned about “world evangelization.” The idea, then, was that there were millions of people in Europe or in South America or in the United States who were Christians in name only. These people had been baptized as infants, and perhaps vaguely thought of themselves as “Christians” in some hazy, civil-religious, cultural sense. But they were otherwise indistinct from their secular neighbors. Billy and his fellow “world evangelists” believed that such nominal Christians needed to get saved, to be born again. And so they called for missionaries to be sent to preach to these nominal Christians.

None of that is what “nominal Christians” means in the article above. The focus now is not on reaching the lost among “cultural” or “cradle” Christians who were really merely Christian in name only. The focus has shifted, instead, to identifying the illegitimate posers trying to pass themselves off as real, true Christians. It’s not a call for a reinvigorated missionary effort, but rather a call for something like a new Congregation for the Doctrine of the Faith:

Lars Dahle, a theology and journalism professor in Norway … said that the five days of discussion at the Lausanne Movement’s Global Consultation conference were intense, but at the end, managed to come up with one definition of the term: “People who identify with a Christian church, or the Christian faith, but are in contradiction with basic Christian principles, with respect to becoming a Christian, Christian faith, Christian beliefs, church involvement and daily life.”

Dahle argued that one of the big problems with nominal Christianity has to do with just how much confusion there is in the church today over controversial topics.

“We wanted to be realistic about the fact that there is a lot of moral confusion going on in the name of the Christian church. One area would obviously be sexual morality: the move away from a truly biblical holistic understanding of sexuality is very obvious in many churches. And of course that has legitimized — in many people’s eyes — a new view of sexuality, because the church seems to be behind it, at least some parts of the church,” he said.

“Nominal Christians” is not a category of our neighbors who need to hear the gospel so they can be saved. It’s a sub-category of Christians who have gone squishy on culture-war “stances” and therefore need to be purged to maintain the purity of the righteous remnant.

Notice how the understanding of “in contradiction with basic Christian principles” is defined in such a stunted, culturally blindered, politically right-wing, and intrinsically white way. Feminism and the full acceptance of LGBT people are asserted as self-evidently “in contradiction with basic Christian principles.” But that description would never be applied to, for example, the “evangelical Christian who turned back migrant boats.”

That Times profile of Scott Morrison is behind a paywall, so let’s look at a similar piece from The Guardian’s Anne Davies introducing us to the new Australian prime minister: “Who is Scott Morrison? Evangelical churchgoer behind Australia’s tough line on immigration.”

A Christian and regular attendee at the Horizon Pentecostal megachurch in Sydney’s south, he’s a social conservative who led the charge on Australia’s tough immigration policy. …

Morrison, the son of a policeman wears his political ambition and his conservative credentials proudly.

He voted no on same-sex marriage in parliament last year despite a national poll strongly supporting the change. He lists “church” as one of his interests in his Who’s Who entry and counts former prime minister John Howard as his political inspiration. …

On arriving in Canberra in 2007, Morrison quickly made it clear he was ambitious and by 2009 was rewarded with the controversial portfolio of immigration and citizenship by then leader Tony Abbott.

Abbott described Morrison as a “great talent”, and he quickly became a battering ram in the Coalition’s strategy to win government. The message was simple: the Coalition would be much, much tougher than Labor on dealing with asylum seekers arriving by boat.

Under pressure, Labor reopened the offshore detention centres on Manus and Nauru as the 2013 election loomed. When Abbott became prime minister he doubled down on offshore detention. Morrison was unflinching in the plan to “stop the boats”. Operation Sovereign Borders included a policy of turning back boats that attempted to reach Australia. “If people seek to get here the wrong way, they won’t get here,” he said.

In June 2014, he took his message directly to the refugees on Manus and Nauru** in a controversial video. “If you choose not to go home then you will spend a very, very long time here,” he said.

If the howls of criticism of Australia’s human rights record by human rights groups or the plight of detainees in offshore detention personally affected Morrison he didn’t let it show. He appeared to revel in the role of defender of Australia’s borders.

Morrison is a “devout” church-goer and a “devout” evangelical Christian. He is also devoutly obsessed with detaining nonwhite migrants, refugees, and asylum-seekers behind barbed wire on a strip-mined desert island. The latter is somehow not seen as being in any way in conflict with the former. White evangelicals — even those from a Great-Commission-inspired “committee on world evangelization” — do not in any way perceive Morrison’s cruel anti-(nonwhite)-immigrant policies as “in contradiction with basic Christian principles.”

White evangelicalism, in other words, remains “nominally” committed to “world evangelization,” to the Great Commission, and to the urgent call to share God’s good news with all people in the uttermost parts of the earth. But this commitment exists, today, in name only.

* The Billy Graham factor accounts for much of Lausanne’s enduring authority. The best illustration for how this works probably comes from Blazing Saddles. The appeal of “Lausanne was founded by Billy Graham” functions the same as “You’d do it for Randolph Scott.”

August 28, 2018 'Catch and kill' seems awfully close to simple blackmail
Recent Comments
0 | Leave a Comment
Browse Our Archives
get the latest from
slacktivist
Sign up for our newsletter
POPULAR AT PATHEOS Progressive Christian
1