• Pat Robertson isn’t as quick as he once was and these days he’s having a hard time keeping up with the lunatic theocratic agenda he helped get rolling. Poor Uncle Marion is still railing against the “gay agenda” that’s “willing to destroy the whole fabric of society” because Philadelphia opposes tax-dollars supporting a Catholic adoption agency’s no-gays-allowed policy.

Meanwhile, his followers have raced ahead of him — seeing his culture-war solidarity with Catholic Christians as an archaic relic of the Obama era. Their new fight is making sure that tax-dollars can be used to support Real, True Christian ministries that insist Papists shouldn’t be allowed to adopt children either.

It means living like this: “Don’t Use a Debit Card at the Gas Pump.” Why? Because scammers can use card skimmers to steal your info, clone your card, and clean out your bank account. And because the 1 percent is terrified of an actual Consumer Finance Protection Bureau with the funding and the clout to protect you and your accounts from people like this.

Alicia Adamczyk’s article at that link is full of prudent advice for those of us forced to live in the small-government world preferred by our 1-percent overlords and the scammers they invite and empower to prey on us too. Such advice is homework — uncompensated labor. It ranges from the mildly inconvenient to the massively, exhaustingly burdensome: Avoid using debit cards at all. Constantly monitor your accounts. Set up fraud alerts. Vigilantly keep track of your credit score (because unelected, unaccountable credit-rating agencies are not “government,” and therefore their unchecked power doesn’t diminish your freedom). Choose different passwords and PIN numbers for everything and make sure they’re so complex you can’t remember them. Oh, and change them every month.

Our overlords can afford to hire people to do all of that work for them. The rest of us have to do that work for free on top of the job(s) we’re already working.

• It occurred to me last night that this old Wittenburg Door cover illustration would’ve been the perfect accompaniment to yesterday’s post: 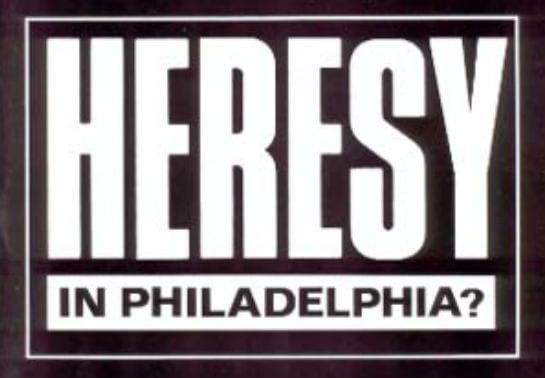 That was from the evangelical satire magazine’s 1985 issue on the “heresy trial” of popular evangelical preacher Tony Campolo, which was a real thing that happened (the trial) even if it made The Door’s attempts at parody and hyperbole seem tame by comparison. The crisis was prompted by Tony taking that same passage from Matthew 25 too seriously. He had argued that the parable teaches that Jesus confronts us in the presence of the poor and the hungry — a long-standing Christian teaching that dates back more than a thousand years before the invention of not-really-literalist-but-we-call-it-that anti-hermeneutics employed by the white evangelical notables who reached for their smelling salts and cobbled together their absurd “heresy trial.”

Savor the fact that these evangelical gatekeepers were not going after, say, Oral Roberts, or Kenneth Copeland, or Pat Robertson, or Jerry Falwell. Those people were all on TV and were all known to always vote Republican, but those things weren’t true of Campolo. And, unforgivably, he was talking about some kind of Christian responsibility to care for the poor and the needy. The punishment for that crime, as always, was to be officially branded with the warning-label “controversial.”

The sad little episode ended as the gatekeepers dimly began to realize the power of the Streisand Effect and the “trial” whimpered to a conclusion — neither formally “punishing” nor exonerating Tony, but just mumblingly petering out lest any further attention might risk young evangelicals reading Matthew 25 for themselves and maybe even literally taking it literally.

• And since we’ve mentioned both The Door and Tony Campolo here, it’s as good a place as any to point out Ian Paul’s post on “Is the gospel funny?” Paul says yes, but not in the way you’re expecting. (Paul is a comedy writer, albeit a British one, but still someone who hears a line like “You strain at a gnat and swallow a camel” with professional admiration.)

• Related to all that Matthew-25-type stuff and to the ongoing struggle to redefine “religious liberty” as tax-funded discrimination in the first item, here’s the happy ending to a story we first wrote about months ago: “Months-Long Dutch Church Service To Protect Migrants Ends After Policy Shift.”

Every day, for more than three months, a church service at a small Dutch chapel went on around-the-clock. Pastors worked in shifts. Volunteers worshiped.

The Bethel Church in The Hague started its nonstop service on Oct. 26 to protect an Armenian immigrant family from deportation, under a Dutch law that forbids police from disrupting a church service to make an arrest.

The church(es) not only won protection for the Tamrazyan family being granted sanctuary during the service, but got the policy changed to protect other families as well. Bravo!

And now, at last, Bethel’s overworked custodian will have a chance to get in there and vacuum the carpets in the sanctuary.

• The title for today’s post comes from U.S. Girls’ “Mad as Hell,” which has a lot going on under it’s campy retro-Spector/Blondie vibe: