Alabama just unloosed an army of Raskolnikovs. This will not end well.

Alabama just unloosed an army of Raskolnikovs. This will not end well. May 15, 2019 Fred Clark

Like the protagonist of Dostoevsky’s Crime and Punishment, Hill was consumed by both pride and doubt. He longed to believe that he was exceptional, that he was morally superior and therefore entitled to something better, grander, and larger than the hum-drum lives of others. And so he was drawn to a theoretical system that assured him it was so.

But theory wasn’t enough — not for Raskolnikov or for Hill. They had to prove their theoretical exceptionalism through their actions, and both sought to do so by means of a lethal experiment. If I really, truly believe this theory, they both agonized, then I can and must act on it, proving the truth of it and proving the reality of my ardent conviction by committing the murders that this theory both demands and justifies.

And so Rodion Raskolnikov butchered an old woman and her daughter with an axe. And so Paul Jennings Hill murdered a doctor and a security guard in cold blood. 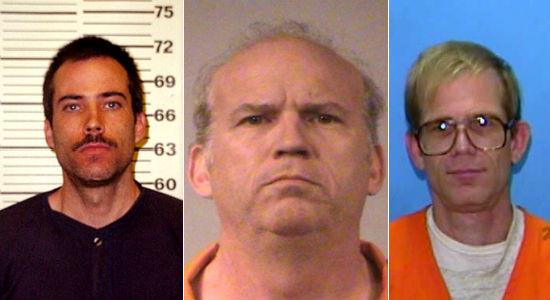 In Hill’s case, the abstract theory he relied on for his own sense of moral superiority and exceptionalism was the abortion=the Holocaust times eleventy!!1! garbage that has long simmered on the fringes and often bubbled up to the mainstream surface of the anti-abortion movement.

It’s tempting to say that Paul Hill took this argument seriously — choosing to behave as though what he and his co-belligerents in the culture wars were saying was actually true. But again, like Raskolnikov, he chose to kill not because he was certain his theory was true, but because he was tormented by the ever-present doubt that it wasn’t. And so he decided that there was only one way to be sure:

Paul Hill argued that abortion was the moral equivalent of the Nazi Holocaust — just like the National Right to Life Committee, the Southern Baptist Convention, the Christian Coalition, Focus on the Family and dozens of other evangelical groups said it was. If that’s true, Hill said, then he wasn’t merely justified, but obligated to take up arms against abortionists. If you’re confronted with an evil equal in magnitude to that of Adolf Hitler — as all these groups insisted was the case — then surely one is obliged to do more than vote Republican every four years in the hopes of one day appointing enough judges to change the law of the land. Confronted with what all of these groups assured him was the Holocaust, he decided to become Claus von Stauffenberg.

Alas for Hill, his experiment did not go as he hoped. His fellow anti-abortion culture warriors recoiled in horror and rushed to condemn his actions as wholly unwarranted, evil, sinful, and impossible to justify. They backtracked away from him so ferociously that you can still see the skid marks 25 years later. Jennings was executed by the state of Florida in 2003. He died disgraced, disavowed and disowned by the vast majority of the movement whose own words had inspired his actions.

But while that movement has long-condemned Paul Hill, it has steadfastly clung to the rhetoric and the moral logic that inspired his fatal experiment. Here is a section of the anti-abortion bill passed yesterday by the Alabama state Senate:

The kindest, most generous, and most charitable interpretation of that passage is to say it is disingenuous bullshit. If it were not that — if any of these people genuinely believed any of this even slightly — then they would have to be moral monsters.

Consider what these white-Jesus-worshipping Alabama Republican men are claiming here. They are saying that:

A) legal abortion is a worse “crime against humanity” than the Holocaust, Stalinist and Maoist purges, the Khmer Rouge killing fields, and the Rwandan genocide all put together; and

B) that the most appropriate, wholly adequate, and heroic response to this crime against humanity was to vote for and donate to the campaigns of Alabama Republicans.

World War II, in this view, was morally illegitimate and indefensible. Good Germans and the citizens of Nazi-occupied countries throughout Europe should simply have bided their time, for decades, supporting opposition parties with their votes and (especially) their financial donations in the hopes that, after a generation or so of ongoing genocide, they would amass enough political power to pass laws ending the killing.

Bonhoeffer and von Stauffenberg and Corrie Ten Boom and Albert Camus and Eisenhower and Churchill and Roosevelt were all wrong to pursue other means of stopping the lesser, not-as-serious-as-abortion crime of the Holocaust. What Paul Kagame and Paul Rusesabagina and Zura Karuhimbi should have done in response to the Rwandan genocide (which was, after all, only 2 percent as serious as abortion) was to support their local Republican Party, just as Dith Pran should have done in Cambodia.

I’m always a bit reluctant to point that out because I know that this country is home to dozens of would-be Raskolnikovs and Paul Hills who will recognize the vast gulf between this Worse Than The Holocaust language and the actions it would demand of them if it were true. And these troubled, entitled, prideful-and-tormented men are likely to view that as a challenge, as a dare. And they’ll set out to prove their consistency and thereby their moral superiority and moral exceptionalism by setting fire to medical clinics or by opening fire on nurses and doctors, or by bombing hundreds of spectators at the Olympics.

But the same challenge and dare has now been officially written into law by the state of Alabama.

That law will be perceived not just as a dare but as marching orders by all the warped little Raskolnikovs out there who have just been reassured that millions of their neighbors are worse than Hitler, worse than Stalin, worse than Mao and the Khmer Rouge and the genocidaires all combined. They will be reaching for their axes and their guns and their pipe bombs and setting out to prove that this is true — to prove that they are morally superior — by wreaking the violence that they hope will reveal and confirm their moral exceptionalism.

This will not end well.

There will be no highlights on...
slacktivist
Related posts from slacktivist