That’s what I said on learning about the upcoming book co-edited by Mark Noll, George Marsden, and David Bebbington. Those three scholars have produced some of the best, most insightful books about (white) evangelical Christianity. But in order to do that, they were first forced to define and describe the outlines of this thing — “evangelicalism,” whatever that means, whatever it is or isn’t, what it includes or doesn’t include. That proved to be a massive, difficult, treacherous task.

That’s a lot of extra work for a historian — something that historians studying more formal, less nebulous denominations don’t generally have to do. I mean, if Bebbington had set out to write a big fat history of, say, “Presbyterianism in Modern Britain: A History from the 1730s to the 1980s,” he wouldn’t have had to sit down first to devise a “quadrilateral” template for distinguishing what did and did not fall into the category of Presbyterianism. The outlines and definitions of that category were already well defined and accepted by everyone who was and wasn’t a Presbyterian. But in order to write his Evangelicalism in Modern Britain, Bebbington had to constantly navigate the vague boundaries of that term — a thorny process complicated by the fact that “evangelicals” themselves seem to be perpetually fighting over those boundaries, demanding that others the term would seem to include ought to be excluded.

And George Marsden faced that same challenge when writing his Fundamentalism and American Culture. So did Mark Noll when he wrote about The Scandal of the Evangelical Mind and The Rise of Evangelicalism.

One odd result of that is that these historians, by default, came to be the ones who defined the boundaries and the center(s) of a religious movement that otherwise refused or failed to define itself. If you ask the National Association of Evangelicals here in America what it means to be an “evangelical,” they will cite Bebbington’s four-part description from his history. That’s kind of strange. I mean, if you asked the UMC what it means to be a “United Methodist,” or if you asked the Latter Day Saints what it means to be Mormon, they’re not going to answer you by saying, “Well, here’s how one historian tried to describe it when he wrote a book about Methodists/Mormons in 19th-century Britain.”

That curious intersection of historiography and religious identityt seems to be one theme in the upcoming book co-edited by this trio of historians, which is coming out from Eerdman’s in November. It’s called Evangelicals: Who They Have Been, Are Now, and Could Be. Here’s the publisher’s blurb:

The past, present, and future of a movement in crisis 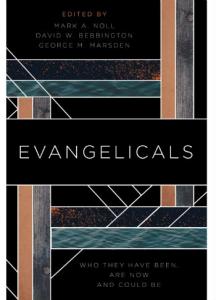 What exactly do we mean when we say “evangelical”?  How should we understand this many-sided world religious phenomenon? How do recent American politics change that understanding?

Three scholars have been vital to our understanding of evangelicalism for the last forty years: Mark Noll, whose Scandal of the Evangelical Mind identified an earlier crisis point for American evangelicals; David Bebbington, whose “Bebbington Quadrilateral” remains the standard characterization of evangelicals used worldwide; and George Marsden, author of the groundbreaking Fundamentalism and American Culture: The Shaping of Twentieth-Century Evangelicalism. Now, in Evangelicals, they combine key earlier material concerning the history of evangelicalism with their own new contributions about present controversies and also with fresh insights from other scholars. The result begins as a survey of how evangelicalism has been evaluated, but then leads into a discussion of the movement’s perils and promise today.

It includes seven chapters, plus an introduction, written by the editors, plus a bunch more written by a wide-ranging assortment of others including Molly Worthen, Jemar Tisby, Kristin Kobes Du Mez, Tim Keller, Tom Kidd, and, oddly, me.

Which is how I wound up making that Traveling Wilburys comment and then having to explain who and what the Wilburys were and that I meant the reference, unambiguously, as a Good Thing, to Dr. Noll himself. (He wasn’t familiar with the Wilburys, but he knew Dylan and George Harrison and picked up on the whole trans-Atlantic supergroup aspect of the comment, so it didn’t end as awkwardly as I initially feared.)

Much of this volume will be serious scholarly essays. For a sense of that, here’s the title of the chapter by Dr. Douglas A. Sweeney, dean of Beeson Divinity School, “The Essential Evangelicalism Dialectic: The Historiography of the Early Neo-Evangelical Movement and the Observer-Participant Dilemma.” (I understood several parts of that title.)

My contribution to this volume, by contrast, is a blog post. And it’s an extremely bloggy blog post — more of a riff than an essay, framed around much more thoroughly researched and argued pieces by religion reporter Ruth Graham and by Robert Jones of the Public Religion Research Institute. I was at first intimidated by the prospect of trying to re-work that post into something more formal and studious — something with footnotes instead of hyperlinks, and with formal, scholarly argument instead of a bit based on channeling “Stefon” from SNL. But it turns out they wanted to run the piece as is — something that involves far less work from me, but that might be even more intimidating in its own way.

I am, however, delighted that the phrase “Pat freaking Robertson” will appear in print in a book from Eerdman’s. (And if you don’t hear that in either Bill Hader or John Mulaney’s voice, then I haven’t done my job.)

You can read that post in its native habitat here: “The ‘Weird’ Fringe is the Biggest Part of White Evangelicalism.” Or, if you don’t want to click that link, you can pre-order the book from Eerdman’s.

I’m guessing that post originally came to the attention of these august historians due to the kidding-on-the-square footnote, which pokes gentle fun at two of them by name. The fact that they both seem to have enjoyed and appreciated that bit is another reason I admire them and why I’m so honored to be included in this book.

Now if you’ll excuse me, I have to go update my c.v. (I don’t actually have a c.v., but now that I can include the names of Noll, Marsden, and Bebbington on it, I’m going to have to make one. This goes right near the top. Just after “licensed forklift operator” and “author of the world’s longest book review.”) 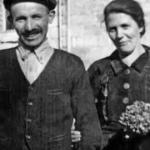