This report by Julie Zauzmer for The Washington Post is really creepy and also really important: “How anti-Semitic beliefs have quietly taken hold among some evangelical Christians.”

It starts at a white evangelical church in Bensalem, north of Philly, where a Vacation Bible School volunteer volunteers her opinions on Trumpism and the international conspiracy of Jewish fiends opposing his Great-Making of America:

Trump, she says, “is surrounded by a Zionist environment with completely different values from Christians. It’s kabbalist. It’s Talmudic values. Not the word of God.”

In other words: It’s the Jews’ fault.

“Why do we have pro-abortion, pro-LGBTQ values, and we do not have more freedom to protect our faith? We are persecuted now,” Yanko says about evangelical Christians like herself. “[Jews] say, ‘We’ve got America. We control America.’ That’s what I know.” 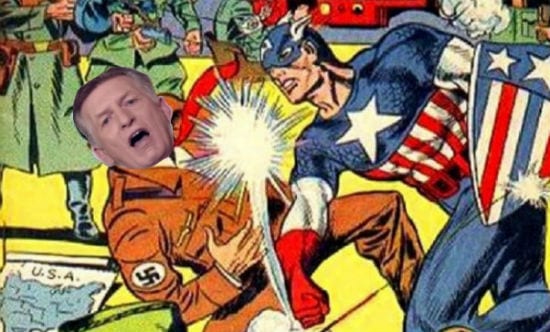 So what does the pastor of this suburban evangelical church think about the fact that volunteers at his church’s VBS espouse actual Nazi views? He doesn’t seem at all worried.

“I’m not in government. It would be like me trying to understand the insurance business,” he said, when asked about Yanko’s allegation that Jews control the government. “The government is so complex — I don’t think that any one group controls everything.”

He felt no need to address his congregant’s anti-Semitic beliefs, either one on one or from the pulpit.

So Pastor Mark personally thinks the Nazi stuff probably isn’t quite true, but it doesn’t strike him as a big deal. Nazi propaganda is being grafted onto his congregation’s understanding of Christian discipleship? Whatevs. Just as long as they’re still following Jesus and Trump, and sharing the gospel of Jesus/Trump with all the kids there at VBS, then everything’s just fine.

This is irresponsible. Pastor Mark apparently agrees with me on that point, since his response makes that same claim: that he has no responsibility to address this.

To be fair, it’s not clear that Pastor Mark is in any way capable of taking responsibility for this. He is not competent to do so. Nor is he equipped to do so. He is armed only with his white American version of the gospel and of the Bible and of Christian teaching, and all of those things are impotent and irrelevant when it comes to challenging the anti-Semitic lies festering in his congregation. They are all just as useless for Pastor Mark as they were for Niemöller because you can’t fight white nationalism with white nationalism.

I’ve read a handful of posts and essays by “socially conservative” and nationalist white evangelical pastors lamenting that they’re unable to compete with Fox News when it comes to discipling their congregations. They’ve only got their flock’s attention for an hour or two every Sunday. Tucker Carlson and Sean Hannity and Laura Ingraham and Lou Dobbs have them for 20 hours a week. I appreciate those pastors’ concern, but their complaint would be more compelling if: 1) They ever once attempted to preach against the venom of Carlson, Hannity, Ingraham, Dobbs, et. al., or to warn against the snares of Fox News, by name, from the pulpit; and 2) They were capable of preaching a version of the gospel, the Bible, or Christian teaching that wasn’t designed and distorted precisely in order to support the very same things that Carlson, Hannity, Ingraham, Dobbs, etc., exist to support.

When all you’ve got is White Jesus, christianamerica, and the proof-texting anti-hermeneutic designed to accommodate slavery, then you may as well respond like Pastor Mark does, like a walking shrug emoji unconcerned by the wiles of Wiles and the straight-up Nazi lies embraced by your Vacation Bible School volunteers. You may as well proudly affirm your irresponsibility because you haven’t got any resources with which to act responsibly.

Here’s the conclusion of Zauzmer’s piece, which involves a nice after-church lunch with a very nice white evangelical couple in Florida:

For Wanda and Doug Meyer, like many other evangelical Christians across the country, these YouTube channels are their primary source of news. They turn to YouTube to understand events that seem vitally important to them, like policy in Washington that will impact their religious freedom at home in Brandon, Fla.

… On YouTube, they find the pastors who pray with Trump at the White House, the pastors they really trust.

“It’s right there on YouTube. You don’t hear it on mainstream media. We know Kenneth Copeland. We know Paula White. We know David Barton,” Wanda said. “Different ministers, that’s where we get our news. People who know what’s really going on.”

As they ate lunch after the service at their large evangelical church, the Meyers said they would like to someday visit Israel, which is religiously important to them. But they also watch a lot of videos online when they’re watching those pastors’ sermons. They believe, with total certainty, in what they hear, even when the information is false: that humans have nothing to do with climate change. That Muslims are trying to implement laws in U.S. states that would allow them to kill Christians with impunity. That a shadowy group, including wealthy Jews as leaders, meant to use Hillary Clinton to bring about “one world government.”

Wanda says they try to “stay up to date” on the “spiritual battle … financed by the Illuminati and the Rothschilds.”

Here, again, I have to side with Niebuhr and C.S. Lewis and suggest that it is neither true nor possible that the Meyers, or anyone else, is able to “believe, with total certainty” any of these things. Self-deception does not allow for total certainty because it requires some division of the self into the part accepting the deception and the part carrying it out. And the part carrying it out is always — even after years of training in habitual reflex — will always be aware of what it is doing.

The lies of Kenneth Copeland, Paula White, and David Barton are not convincing or compelling. Nor are the lies of Carlson, Hannity, Ingraham, and Dobbs. They are every bit as strained and transparent and flimsy as the lies of Mike Warnke. The Meyers are not innocent dupes. Nor is Ms. Yanko in Bensalem. They have not been duped and they are not innocent. They are choosing to pretend to believe because these are the lies they wish were true.

The outrageousness of those lies — Illuminati! Rothschilds! Satanic baby-killers! — is not a measure of their extreme gullibility. It is a measure of the extreme gap between the humbling reality they know to be true and the fantasy universe that would have to be created for them to be able to proudly regard themselves as morally superior. It’s not stupidity or misinformation or naivete or a lack of media literacy. It’s the sin of pride.

No fact-checking or training in media literacy will be able to dissuade these folks from the choice they are choosing to make until or unless it first deals with that self-righteous pride. As the great theologian said, “It is not light that is needed, but fire.”