And in the 20th year of the blog, the Slacktivist looked upon all that he had posted, and saw that some of it was, you know, pretty OK.

This is from January 9, 2013, “Rules for Christian sex and rules about rules“:

This is why our Christian Rules for Sex and our Rules for Christian Sex are a dead end. It’s not so much that these rules are widely disobeyed, but that they are largely irrelevant. We don’t bother explaining most of them. We aren’t able to explain many of them. So it shouldn’t be surprising that others don’t understand them either.

Part of the reason we don’t bother explaining these rules is that they seem so simple. The Christian Rules for Sex/Rules for Christian Sex seem to boil down to a single, binary question: Yes or no? Are we talking about sex between a married straight couple? If yes, the rules say, then everything is fine. If no, the rules say, then it is an abomination and a vile stench in the nostrils of God. 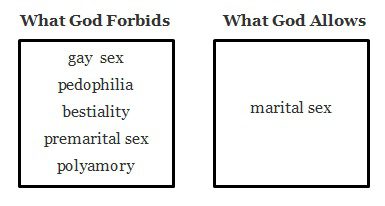 Libby Anne summarized this nicely in her “Tale of Two Boxes,” from which I’ve borrowed the illustration used here.

When the church teaches this binary question and the set of rules it provides as the whole of Christian teaching about sex it’s basically inviting people to ignore what it has to say. As long as such rules are asserted without being explained, explored and defended, then no one should ever expect them to be followed, honored or otherwise taken seriously. (And, no, citing chapter-and-verse is not a way of defending the rules, just of reasserting them.)

Now, I think that part of the reason this binary question and its collection of rules haven’t been explained and defended is because these rules, as usually asserted, can’t be explained or defended. I think our usual assumptions about the CRS/RCS are, in many ways, wrong.

This is where my more conservative evangelical critics accuse me of wanting to “do away with the rules” and of arguing that “anything goes.” That’s not true, but such accusations are to be expected from folks who have asserted and embraced a set of rules without exploring or explaining them, even to themselves.

My response to such accusations is always the same: I’m not saying anything goes, I simply want you to treat your “biblical rules about sex” exactly the same way that you’re already treating the biblical rules about money. I want you to take the exact same hermeneutical approach that you are already taking to every biblical teaching on wealth and possessions and apply that to biblical teaching on sexuality. Then treat both sets of teachings — and other people — with more respect than your current practice seems to do with regard to either subject.

My point here, though, is not to argue about the substance of the CRS/RCS, but to note that this rule-based approach is fundamentally misguided — that rules are just about the worst possible method for getting people to obey the rules.