Reflect upon your woke sky

• Here’s another one for our file of church buildings being sold for new use: “Church in Sunbury Closes, Sells Building to Fire Company.” Unlike John Scalzi, the Americus Hose Company didn’t get the pews, pianos, and pipe organ as part of the deal — those were auctioned off to other churches first. Best wishes to the fire company in their new home.

• Randall Balmer on “Putin, the bear and the book of Revelation.” His point there is valid — that “Bible prophecy” Rapture enthusiasts get excited about “the bear” in Revelation every time Russia is in the news.

But there isn’t actually a bear in the book of Revelation, just a beast “that was like a leopard, its feet were like a bear’s, and its mouth was like a lion’s mouth.” So if we’re going to read Revelation “literally” — as our Rapture Christian friends insist we must — we shouldn’t worry about a country symbolized by a bear, but about a country symbolized by a leopard that has bear’s feet.

It’s very important, of course, not to get the leopard-with-bear’s-feet beast of Revelation 13 confused with the bear-with-three-tusks or the leopard from Daniel 7. A mouth like a lion’s mouth, after all, wouldn’t have three tusks in it. And Daniel’s leopard has wings but no bear’s feet.

Alas, our Rapture Christian “prophecy scholars” will insist on conflating those passages, rejecting any suggestion that the bestiary of Daniel 7 is, for all of its delirious detail, a fairly straightforward description of the various Seleucid rulers oppressing the people Daniel was written for — people who were very much not 21st-century white American Christians.

The Rapture Christians also refuse to accept my alternate hypothesis — which is that the beasts of Daniel 7 are a prophetic reference to the career of journeyman backup quarterback and Super Bowl LII MVP Nick Foles. (Eagle, Ram, Jaguar, Bear … it’s right there, people.) 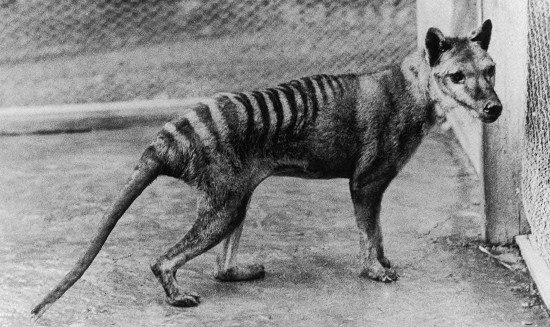 • Speaking of mythical beasts …  Cryptozoologist Richard Freeman makes a helpful distinction between his work and other forms of “paranormal research”: “Because there’s no paradigm shift. If you look at ghosts, you have to postulate life after death or psychic power. But cryptozoology is just a branch of zoology. It’s about animals that are unknown to science. And it’s not all big, scary monsters. Cryptozoology is just as interested, for example, in the rediscovery of the ivory-billed woodpecker.”

He doesn’t seem to be claiming some secret knowledge rejected by a nefarious conspiracy of experts, but — more modestly — to be suggesting that maybe there are creatures yet to be discovered and that maybe stories and legends carry hints that could help lead to such discoveries. Freeman is, in other words, an eccentric oddball, but not an actual crackpot. And I hope he’s right about thylacines.

Contrast this cryptozoologist’s outlook with the conspiracy-minded crackpottery of the Rapture Christians Balmer discusses. I have far more respect for someone who says “Maybe those stories about chupacabras could help us discover some real animal we haven’t yet studied” than I do for someone who says “I have a secret code that reveals The Bible’s Secret True Meaning and it turns out it’s all about me here in 21st-century America.”

• Steve Wiggins writes about Wordle and thus also about the board game Mastermind. That game reminds me of my late fundie grandmother, who was terrible at Mastermind because every time — Every. Time. — she hid the same colored pegs in the same order: Red and Yellow, Black and White.

• That same Sunday school chorus features in this remembrance of Ray Bakke, who died last month at 84. Bakke was an “urban missiologist” — someone who took Jonah 4:11 seriously. “Should I not be concerned for that great city?” God asks in that verse, and Bakke was determined to share that divine concern. That led him into conflict with Team Jonah and folks like C. Peter Wagner who were promoting their “homogenous unit principle,” something Bakke recognized, early on, as merely a pious euphemism for segregationism.

• Since the lovely and talented Oscar Isaac hosted Saturday Night Live this weekend, let’s enjoy a glimpse of the Blinking Underdogs — the Christian ska band he led back in the ’90s.

• The title of this post comes from an indecipherable tweet from white-/Christian- nationalist Republican Rep. Clay Higgins of Louisiana, who wrote: “You millennial leftists who never lived one day under nuclear threat can now reflect upon your woke sky. You made quite a non-binary fuss to save the world from intercontinental ballistic tweets.”

No, I don’t know what that’s supposed to mean either. But that’s the 21st-century Republican Party in a nutshell: angry, incoherent madlibs from people mad at libs.

March 7, 2022 March 7 Flashback: Try to set the night on
Recent Comments
0 | Leave a Comment
"Sure, but you show up in a ‮xirtanimod‬ outfit ONE time...."
Ross 6/30 Flashback: It’s the freakiest show
"When the official policy of the repuclican party became "Ensure we rule for the rest ..."
Ross Smart people saying smart things (6.30.22)
"https://uploads.disquscdn.c..."
Matri Smart people saying smart things (6.30.22)
"They believed it was evidence because of what someone said."
Nomad 6/30 Flashback: It’s the freakiest show
Browse Our Archives
Related posts from slacktivist